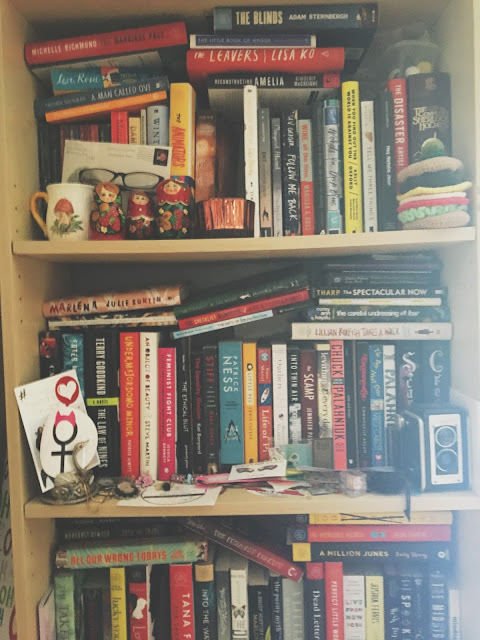 Welcome to another monthly reading list! This month I felt like I was in such a slump, it felt like I was barely reading anything. So I was pleasantly surprised when I was compiling my part of this post to see that I actually read a ton of books in September. It might be my biggest reading month this year. Let's get to it and as always you can follow us on Goodreads (follow Jen here and Heather here).

The Most Dangerous Animal of All: Searching For My Father and Finding the Zodiac Killer by Gary L. Stewart
As a true crime lover, this was such a fascinating read. It follows Gary L. Stewart and his search for his birth father after his birth mother finds him in his late 30s. It details a lot of family history, but in a way that was engaging. It was a little disappointing that there's no clear resolution, but there are a lot of really good facts and "evidence" presented to why Gary believes his birth father was the Zodiac Killer.

The Sacred Lies of Minnow Bly by Stephanie Oakes
Our book club selection in September. It was a wild ride and we talked about it more in our monthly discussion post here.

Never, Never (Parts 1-3) by Colleen Hoover and Tarryn Fisher
If I'm honest, I've not had great luck with Colleen Hoover books. Some people love her but I tend to find her takes on romance kind of problematic. Never, Never focuses on Charlie and Silas, two people who have no memory of who they are, but are supposed to be in love. Their memory resets every 48 hours so they have limited time to figure out what is going on. I'm not sure if it's the joint author, but the first part of this series (they are all around 150 pages so not too long) but I didn't love how it ended. I don't know how much I'd recommend it. I can't say just read the first part, since it ends on a cliffhanger but the way the story is resolved is so unsatisfying.

We Were Feminists Once: From Riot Grrl to Covergirl. The Buying and Selling of a Political Movement by Andi Zeisler
A book of essays and in depth research on how feminism as a movement has been taken and branded to sell products. It's by the co-founder of Bitch magazine, and she knows her stuff. As a lover of feminist tees and basically anything sold to me with the word "feminist" on it, it was interesting to examine the way that word is sold to me without the activism. Some of my favorite essays were on tv/movies and how they use feminism (or don't) and the chapter on celebrities and feminism. Definitely give this one a read if you at all identify as a feminist.

One of Us is Lying by Karen McManus
A group of students all end up in detention when one of them dies. The one who dies ran a school gossip blog and was getting ready to post something damaging on the others who were in the room when they died. Now they are all suspects in his murder and the chapters alternate to give you the point of view from everyone left. It is definitely a "The Breakfast Club but with a murder" story and while I would say I didn't love the way it ended, it was fun trying to figure out whodunnit.

Radical Candor: Be a Kick-Ass Boss Without Losing Your Humanity by Kim Scott
I'm not a boss but my workplace is big on transparency and my lead told me Radical Candor made a big splash when I was on leave this spring. I read a few chapters but since it was a library book I had to send it back before I finished. I do think that you could get most of what you need from her Ted Talk from the same name, but maybe you would get more out of it if you are a boss or leader in your job? I still think it was a good read, from what I could tell.

The Unbeatable Squirrel Girl Vol. 3 by Ryan North
I borrowed this from Jen and I found myself just so in love with Squirrel Girl and all her friends. She's one of my new favorite super heroes and I cannot wait for her movie to come out.

Snotgirl Vol. 1 by Byran Lee O'Malley
This comic about a green haired fashion blogger took me by surprise. I was expecting a light hearted take on blogging, but instead I got kind of a darker look at friendship (or fake friendship) in LA and the influencer world. I don't know how much I loved this, but I'm intrigued enough to continue with the series (if Jen keeps buying it since I borrowed this from her too).

Spoonbenders by Daryl Gregory
Ok this might be my favorite read this year. A solid 5+ stars from me. It follows the Telemachus family, a family with psychic powers whose chance to be verified on tv was shattered in the 70s. It takes place in the mid-90s and alternates chapters between 5 members of the family. You get a lot of backstory and there's also a mob subplot. It sounds like a fantastical read, but it was so grounded in human emotions and regrets, that I could not put it down. I loved everything about it.

I Know I Am, But What Are You? by Samantha Bee
I listened to this audiobook during my commute. I really like listening to celebrity memoirs since they usually read their own books. It's fun to hear their stories in their own voices. I enjoyed all of the essays in this book, though it wasn't as engaging as Amy Poehler's or Tina Fey's memoirs, I still enjoy Samantha Bee.

Behind Closed Doors by B.A Paris
This book should have been right up my alley. A thriller type book about a woman who gets trapped in a marriage with a psychopath. He controls every aspect of her life and it's all a countdown until her sister who comes of age in a few months comes to live with them and then his torture will transfer to the sister. It was pretty gripping at times and I did enjoy the ending, but it wasn't the best in a genre that I've read.

Full disclosure, my reading list is pretty short this month mostly because I signed up for wayyy to many cross stitch clubs and that took up my main focus for the month.

The Sacred Lies of Minnow Bly by Stephanie Oakes
Learning about cults, even fake cults, are my jam and I ate this book up. Half of it focused on her recovery from said cult and the whole time I was wishing for more of the cult life story. Minnow had a pretty great character arc but I have a one tract mind.

The Tower of Dawn by Sarah J. Maas
I've been reading this series for so long I'm starting to not remember why anymore. I was super excited to get a book all about Chaol but this book did not live up to what I had expected. The pacing was so much different than the last books and it felt like this book was shoved in just so Chaol could have a glorified love story.  The timing also felt weird since it was set as the same time as the last book but before the conclusion and that felt really disjointed to me. All in all, I didn't love it and I really missed the witches in particular.  I wish the last two books were combined in some way because I didn't love this book's set up.

How to Hang a Witch by Adriana Mather
This book is currently on sale for $1.99 which is why I purchased it. The premise is about a curse stemming from the Salem witch trials.  While the premise intrigued me, I didn't love the execution or the overall story.  I don't handle people falling for spirits very well; it's not a trope I love.