3 Reasons You Should Read The Sacred Lies of Minnow Bly 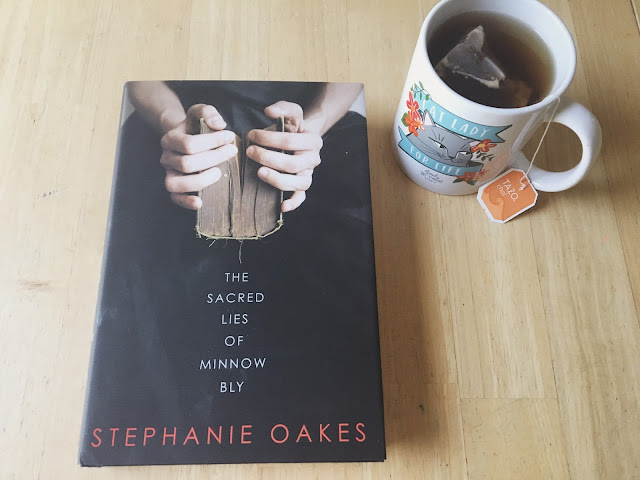 The month is over (crazypants) and it's time to check in to see our feelings on September's book club pick.  I'm sure you remember, we chose The Sacred Lies of Minnow Bly by Stephanie Oakes mostly to ease us unto creepy fall reads.  I don't think creepy is the right word to describe this book; may gruesome is more fitting?  I've always been a little too fascinated in the lives of cult members and the Amazon sale gods put it on sale for $1.99 right around picking time.

The Kevinian cult has taken everything from seventeen-year-old Minnow: twelve years of her life, her family, her ability to trust.And when she rebelled, they took away her hands, too.Now their Prophet has been murdered and their camp set aflame, and it's clear that Minnow knows something—but she's not talking. As she languishes in juvenile detention, she struggles to un-learn everything she has been taught to believe, adjusting to a life behind bars and recounting the events that led up to her incarceration. But when an FBI detective approaches her about making a deal, Minnow sees she can have the freedom she always dreamed of—if she’s willing to part with the terrible secrets of her past.The Sacred Lies of Minnow Bly is a hard-hitting and hopeful story about the dangers of blind faith—and the power of having faith in oneself


Our Thoughts!
1.  Made Up Religion
Jen Says:
Cults have always fascinated the crap out of me so I was very excited this book made the pick. The religion behind the cult is a made up religion which I find even more fascinating.  This dude seriously made up a religion, called himself the Prophet and then named the religion after himself. That takes balls, and charisma, but mostly balls.

Heather Says:
It was really interesting to read about a made up religion and to see the inner workings of it, which were honestly horrifying at times. I think seeing the way a person made up an entire religion and called himself a prophet was kind of bananas, but getting glimpses into how he preyed on vulnerable people to follow him into that religion was sad and fascinating.
2.  Mind Control
Jen Says:
The mind control aspect of cults is so mind blowing to me.  How multiple people can blindly follow a charismatic stranger and change the whole trajectory of their lives based upon said person. Especially when the whole damn thing is completely made up. HOW?!  What makes it even more unhealthy is if you stray from the teachings or try to escape you have to endure such horrendous punishments including physical and mental abuse.

Heather Says:
It was really scary to read about how much this "religion" was able to control people by keeping them in a compound completely cut off from the outside world. I think it shows how important it is to seek out all the information available to us. It was fascinating to see Minnow start to question those teachings and to realize how big of a part fear played in sticking to the rules.
3. Gruesome AF
Jen Says:
The physical and mental abuse is gruesome AF. I mean, Minnow gets both hands cut off as a form of punishment for trying to escape. HER HANDS WERE CUT OFF! Children are being raised without any sort of schooling. Polygamy is running rampant in an attempt to grow the cult population. They live off the grid so they have to provide everything for themselves. It was heartbreaking and gruesome and so, so interesting.
Heather Says:
This book was so unexpectedly gruesome! Like so gruesome I wanted to close my eyes and throw the book at some parts. It didn't flinch from going to dark places and showing the dangers of the cult. The physical abuse was hard to read about but it really showed how mentally controlled these people were for years. It was hard to read at times, but the way that it didn't shy away from showing the gross things was a big part of showing the inside working of cults.
Posted by Heather at 3:06 PM