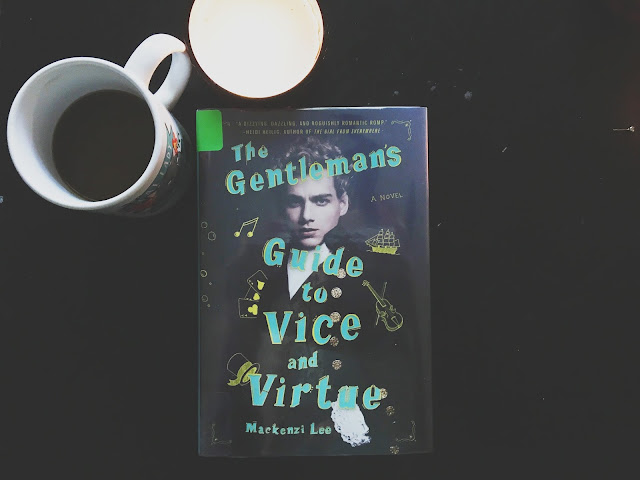 August was a very good month for reading around here. I picked out our August read because I had gotten it from the library and after reading one chapter, knew that Jen would love it. It did not disappoint. It was a bit longer than what I had been reading but it was so engaging I didn't even notice. I'm so happy we were able to squeeze in another read that was pretty diverse in it's representation. As a little refresher, here's what it was about:

Henry “Monty” Montague was born and bred to be a gentleman, but he was never one to be tamed. The finest boarding schools in England and the constant disapproval of his father haven’t been able to curb any of his roguish passions—not for gambling halls, late nights spent with a bottle of spirits, or waking up in the arms of women or men.But as Monty embarks on his Grand Tour of Europe, his quest for a life filled with pleasure and vice is in danger of coming to an end. Not only does his father expect him to take over the family’s estate upon his return, but Monty is also nursing an impossible crush on his best friend and traveling companion, Percy.Still it isn’t in Monty’s nature to give up. Even with his younger sister, Felicity, in tow, he vows to make this yearlong escapade one last hedonistic hurrah and flirt with Percy from Paris to Rome. But when one of Monty’s reckless decisions turns their trip abroad into a harrowing manhunt that spans across Europe, it calls into question everything he knows, including his relationship with the boy he adores.

Now that you are all caught up, here are 3 reasons this book needs to make its way to your TBR immediately.

1. All the diversity
Heather says:
In what has become a surprising (and very welcome) trend for book club this year, there was so much diversity in this book! There's a bisexual narrator, a m/m romance, disability, ethnic diversity, and anxiety. There's also a very sassy sister who is more interested in science and reading than becoming someones wife and finishing school. It's really cool to have so much diversity in one read, and so many different forms of representation as well.

Jen says:
Not only has diversity been a trend in our book club, it's been a huge trend in the YA community at large.  This is something that has changed significantly in the last couple of years.  Books are starting to mirror real life way more and even when they are written in a more historical or classical sense. Like Heather, I am loving this trend and this book in particular had such a great mix of different forms.

2. Humor & Sass
Heather says:
Man, there is so much humor and sass in this book. I love a book that uses a lot of humor that feels real and not forced. Sometimes books will try very hard to be a Very Funny Book and you can tell it's not authentic. Not the case with AGGTVAV (you gotta love acronyms for long books!). I actually laughed out loud so many times. I also love me a good sassy lady and Monty's sister Felicity was such a good example of a sassy lady who will take no shit. She just wants to read and go to college and will probably stab you if you get in her way.

Jen says:
All 3 of the main characters had some wit about them. They were either getting into ridiculous situations and conniving together, trying rectify said situations. But I would have to agree with Heather, Felicity wins the Sassy Lady Award. You could literally feel her rolling her eyes before you got to actually reading it.  She had a pretty strong presence.

3. All the feels
Heather says:
For a book with a lot of humor and adventure, there were so many times it really hit me in the feels. Part of the point of Monty's tour of the Continent was to live it up before running his father's business. The familial expectations, not just for Monty, but also for Felicity, who would rather go to college than finishing school, and Percy, who is held back by the color of his skin, were such a big point of the story and one that really got to me. There was also so many feels with the romantic relationships and with the sibling relationships and with the friendships. Gah! It was such a great balance of adventure and humor and feels guys.

Jen says
Gah, it did have a lot of feels! I was forever rooting that Percy & Monty would get together. Rooting for Monty to tell his dad where to shove it.  Rooting for Percy to find a decent doctor to help him control his illness. Rooting for Felicity to shatter those glass ceilings. Just rooting for them all to live their own lives regardless of what is expected of them. It was a perfect, silly read for the summer.