3 Reasons You Should Read A Darker Shade of Magic 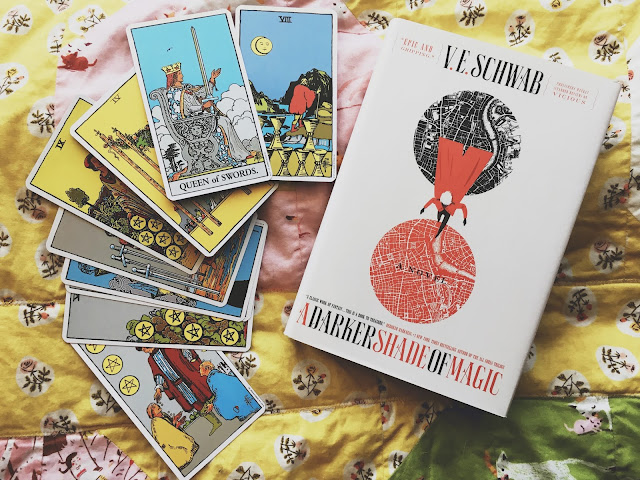 So, did everyone finish A Darker Shade of Magic? Well, we did and are prepared to list 3 reasons why you should be reading this book and/or series (it has a total of 3 books), you know in case you value our bookish opinions at all. Either way, we are sharing what we loved about this one! I promise, we'll remain as spoiler free as possible! But first, let's review!﻿

Review time!
Kell is one of the last travelers--magicians with a rare, coveted ability to travel between parallel universes connected by one magical city. There's Grey London, dirty and boring, without any magic, and with one mad King--George III. Red London, where life and magic are revered--and where Kell was raised alongside Rhy Maresh, the roguish heir to a flourishing empire. White London--a place where people fight to control magic and the magic fights back, draining the city to its very bones. And once upon a time, there was Black London. But no one speaks of that now.Officially, Kell is the Red traveler, ambassador of the Maresh empire, carrying the monthly correspondences between the royals of each London. Unofficially, Kell is a smuggler, servicing people willing to pay for even the smallest glimpses of a world they'll never see. It's a defiant hobby with dangerous consequences, which Kell is now seeing firsthand.Fleeing into Grey London, Kell runs into Delilah Bard, a cut-purse with lofty aspirations. She robs him, saves him from a deadly enemy, and finally forces Kell to spirit her to another world for a proper adventure. Now perilous magic is afoot, and treachery lurks at every turn. To save all of the worlds, they'll first need to stay alive.


1.  Amazing Bookish Organization.
Jen Says:
Ok, this is legit a super nerdy reason so read this book, but I absolutely loved the overall structure of this book. The story is broken down into chapters, but each chapter is broken down even farther into subchapters.  I tend to like my chapters more on the shorter side so I really dug the organization of this book and the subsequent pacing thereof.

Heather Says:
I agree with Jen. It was so nice to have smaller chapters and made the book feel like it was flying by. I also enjoyed the different points of view we got to read from, alternating from main characters, to fringe characters who gave us a unique viewpoint for one small chapter.


2.  Magical Elements
Jen Says:
So, it's no surprise I love magic. I mean, I reallllly love it. I'm also so intrigued on how the author presents the magic itself as well as the magical folklore.  The magic in this book is broken down by elements (bone, blood, etc.) which I'm always a fan of. I love examining how the magic is intended to work based upon which elements their magic is strongest.

Heather Says:
This was definitely one of the most unique magical stories we've read in awhile. I was intrigued by the idea of multiple versions of London and each version having it's own variety of magic (or lack thereof). Red London was my favorite but that might just be because Kell is my favorite. His Antari magic was so fascinating and being one of the only ones left with that kind of magic was super interesting.

3. Mutual Camaraderie.
Jen Says:
I'm always a fan of the friendship element in books, whether it's between members of the same sex or opposite sex  I tend to enjoy the friendship factor way more than any romantic pairings. There is just a time and place for a love story, yah know?  Anyway, I loved the camaraderie between Kell & Rhy and also between Kell & Lila. Kell can be a little over the top at times, but he takes his friendships pretty seriously and I can really respect that.

Heather Says:
This was definitely a book that was low in romance, high in friendship. I loved that romance wasn't a focus in this first book (but I'm ok with a little romance developing later. I'm kind of shipping a Rhy/Lila romance right now). Kell can be kind of dramatic, but he is loyal and took his friendships seriously. I loved watching his relationship grown with Lila from reluctant partners to friends over the course of this book. Now I need to get my hands on the rest of this series!