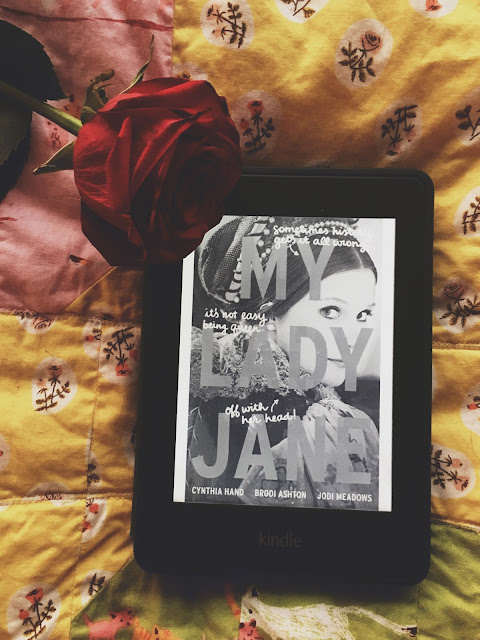 There's something so fun about picking your first book of 2017! I am currently finishing up A Torch in the Night by Sabaa Tahir that I started last week so I have been giving a lot of consideration to which book will be the first one I start reading in 2017. Bookworm problems: overthinking which book to read next from your massive TBR.

This month we decided to kick off 2017 with a book that Jen and I have both been interested in since it debuted over the summer: My Lady Jane by Cynthia Hand, Brodi Ashton, and Jodi Meadows. We both snagged this on sale a few weeks ago and when we were going back and forth on book club options, Jen threw this one out and it sealed the deal! I'm really excited because a reviewer I follow on Goodreads gave this a great rating, and she's notoriously hard on what she rates highly. I trust her judgement as much as Jen's maybe.

Let's take a look at what it's about:

The comical, fantastical, romantical, (not) entirely true story of Lady Jane Grey. In My Lady Jane, coauthors Cynthia Hand, Brodi Ashton, and Jodi Meadows have created a one-of-a-kind fantasy in the tradition of The Princess Bride, featuring a reluctant king, an even more reluctant queen, a noble steed, and only a passing resemblance to actual history—because sometimes history needs a little help.

At sixteen, Lady Jane Grey is about to be married off to a stranger and caught up in a conspiracy to rob her cousin, King Edward, of his throne. But those trifling problems aren’t for Jane to worry about. Jane is about to become the Queen of England.


Sounds pretty cool and interesting. Plus it's still on sale for $1.99 for kindle if you want to join along but aren't into dropping like $10 on a new book you haven't heard of before. Let's kick off the 4th year of book club friends! Cheers!
Posted by Heather at 4:59 PM