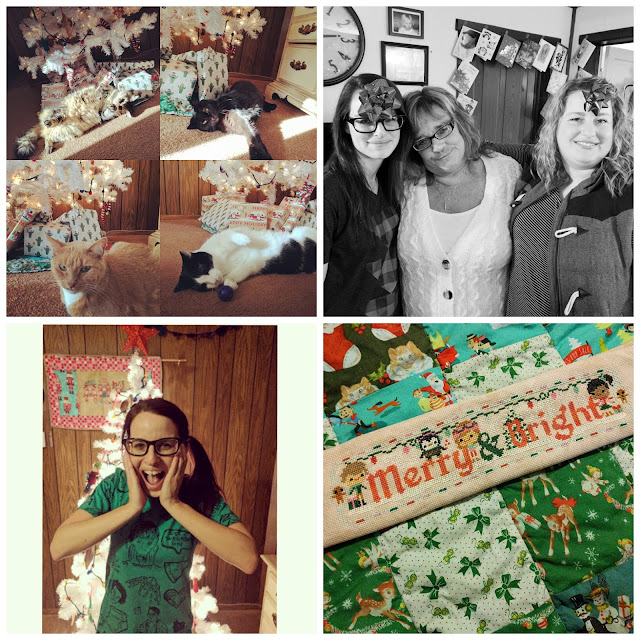 Read
Man, December is a crazy busy month.  Other than our book club pick, I was only able to squeeze in the first two books in the Young Elites series, by Marie Wu.  It was ok but I didn't love it as much as I wanted too.

Watched
I keep trying to think if I watched anything new this month and I don't think I did. I think I watched a bunch of Parks and Recs (I guess that is new to me), Friends and lots of Christmas movies.  For some reason, movies always help put me into the spirit of things.

Listening
I'm forever listening to The Best of Friends podcast. I'm seriously getting so close to being caught up to real time, basically right before they are finished with the show. Please, someone, recommend something new to me. Please.

Christmas!
I spent a good chunk of the month preparing for Christmas. The shopping, the wrapping, the decorating, the baking, the family cheer. It's exhausting but probably worth it in the end. I think. Anyway, it was another good holiday season that went by oh so fast.

New Years!
The husband and I always cook up a crap ton of junk food and just chill at home. This year was no exception.  I even branched out these year and included multiple desserts.  Being super chill after the craziness of the Christmas holiday is totes my style.

Sewing with E & M
So I bought Emily & Morgan sewing kits for Christmas and I think one of my favorite memories about this holiday was sitting and sewing up those kits together.  They both did such a great job sewing up their cats and foxes.  Plus they both picked out really hilariously great gifts for me. It was so much fun.  My heart couldn't have been fuller. 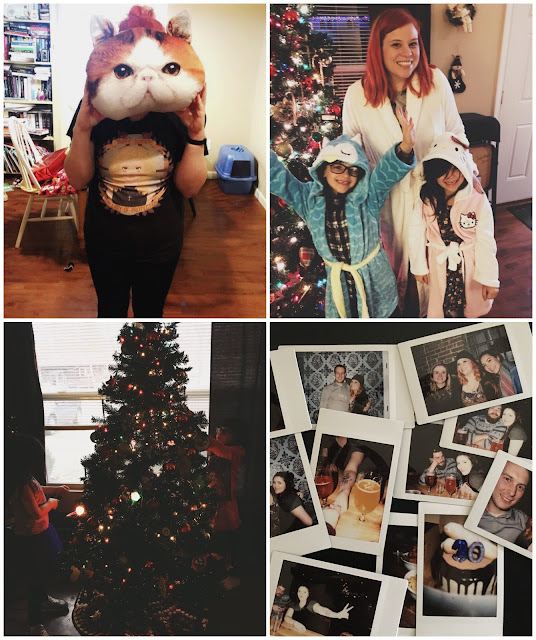 Read
I had a pretty good hot streak for a week in December where I read basically one book a day. I know, like I need to get a life, but it was awesome. The books I read were so good and wonderful. Dumplin' by Julie Murphy, The Serpent King by Jeff Zentner, and If I Was Your Girl by Meredith Russo were definitely the highlights. I would whole hearted recommend each and every one of these reads. You can always follow me on Goodreads to see everything I'm reading too!

Watched
Ok so I was out for a solid week with an intestinal infection literally the day after turning 30. The only good thing about this was I could do literally nothing except lay on my couch and watch Netflix. I binged both seasons of Scream: The Series and discovered one of the best horror shows I've ever seen, Slasher. I also started watching This is Us on Hulu and I'm sucked in. My boyfriend suggested we watch The People vs. OJ Simpson:American Crime Story and it's legit guys. Lots of good tv was watched in December.

Listening
I started listening to the podcast Bad with Money with Gaby Dunn. I haven't been a huge fan of Gaby Dunn before now, but I related so hard to her struggles with money. For most of my life I've been bad with money and there's a lot of shame associated with not being good with it. There's a really interesting bit she did at the end of the first episode. She asked people on the street two questions: What's your favorite sexual position? Then what is the balance in your bank account? It was really surprising that most people were more likely to talk about sex with a stranger than about money. Anyway, I highly recommend this as well.

1. Hello 30
Well it happened. I'm 30 and it feels really damn good. I got to ring in my next decade with my friends at my favorite restaurant in St. Louis, Lulu's Local Eatery and had an amazing vegan tiramisu cake by Genuinely Baked. Then we got beers at a local brewery and it was the best day. I felt like I got to celebrate my 20s ending and usher in my 30s in the perfect way.

2. New Christmas Traditions
This year we didn't have anything to do on Christmas Eve so we started some new traditions. The girls and I baked a bunch of cookies, my sister and her boyfriend and my nephew came over so we could exchange gifts (she got me an eyeshadow palette and I'm so excited), then we went out for Chinese food and each got to open one gift. The girls and I all got robes and we are now constantly cozy. It's the best. It was also really amazing to start some new traditions together.

3.  Instax Camera Love
I hit the present jackpot when my boyfriend got me an Instax Mini 90 Neo Classic for my birthday. I've wanted one for years but never pulled the trigger on it. It's been so fun taking pictures with it, though I feel like there's kind of a learning curve for it and I need to practice a lot more. There aren't a ton of blogs out there on how to take great photos with it, so maybe I'll work on that post soon to help others like me out!