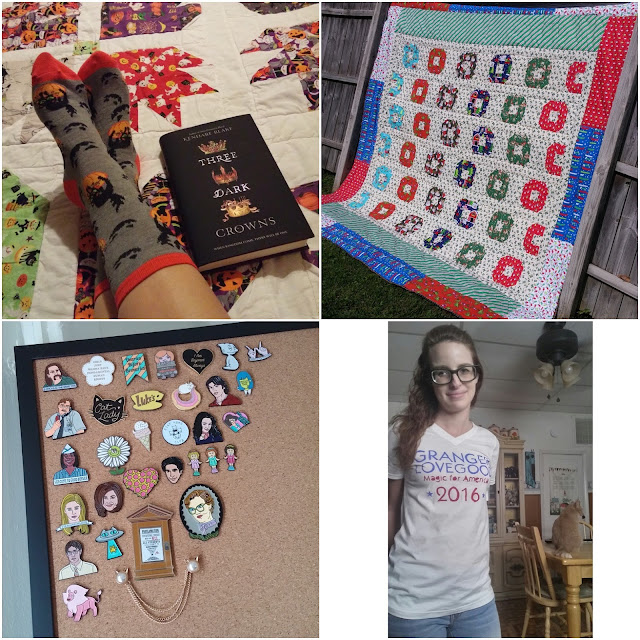 Read:
Other than our book club book, Three Dark Crowns, I was able to read Everything, Everything by Nicola Yoon and The Boy is Back by Meg Cabot.  Honestly, all three books were a major win for me. The latter two were in email correspondence formats which I absolutely love. The dialogue seems so real and I love the flow within that format. I'd recommend them all!

Watched:
This month was full of a bunch of rewatches for me.  I forced my husband to watch Stranger Things, which inspired a bunch of Stranger Things purchases.  I just love that show. I also watched a couple of Halloween movies that are mandatory every year.

Listening:
Kyle Kinane had a new Comedy Central special and it was amazeballs. If you've never watched/listened to any of his stand ups before, I suggest you get on it because he is legit hilarious. I mean, he is basically the voice of comedy central.
Also this month:

1. Quilty Finishes!
In October I finished up two quilts! One was a Christmas quilt big enough for the bed which was a seriously goal of mine to get completed before Christmas.  I think I knocked that goal out of the park. Heather and I routinely have quilt days where we both simultaneously work on a similar quilting project and we were able to also finish that quilt up too.  I love doing bestie quilting projects.  They can take quite a while to finish since we work on them together, but they are so satisfying. Plus it is so much fun to see how the other puts their own spin on a pattern.

2.  Pin Board Organization
You guys are probably going to get tired of hearing about this since it was an October goal, but I love how my pin organizational board turned out.  It is so easy to find my pins and accessorize my outfits. It definitely makes getting accessorized in the morning way easier.  I shared my pin board on instagram and received over 600 likes which is a crazy amount when my normal posts only receive about 20-30 likes. I felt like an instant celebrity for a day.

3.  Halloweening
Halloween is seriously my favorite holiday. I love it all. I want all the Halloween stuff. The amount of money I spent on Halloween paraphernalia this year was a bit ridiculous.  We continued our bestfriendclub Hocus Pocus tradition and this year we made witch hat cookies to go along with the movie. It was a fun easy project that tasted amazing. I tried to do Halloween related stuff all month, even if it was as simple as decorating the porch or watching a Halloween movie or doing a Halloween craft. I just need to do all things Halloween during October. 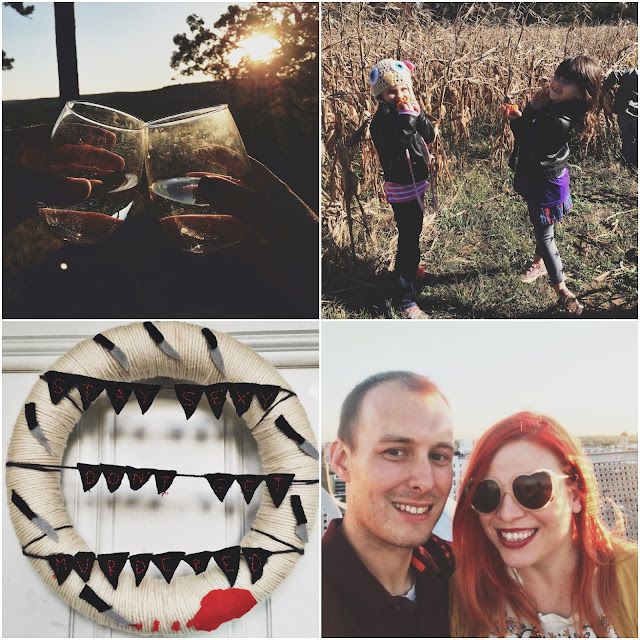 Reading
So October was kind of a terrible reading month for me. I felt really unmotivated for most of the month and the few books I was able to read weren’t very good, so I don’t think I’ll even mention their names here. Now I feel like I’m stuck in this reading slump and I’m trying to claw my way out. I did really enjoy the book club pick Three Dark Crowns by Kendare Blake. It was one of my favorite reads of the year so far.

Watching
I’ve been on a mission to catch up on Supernatural. It’s one of my favorite shows but I’m a few seasons behind. I finally made it up to season 10 so I’m hoping to have a binge watching day this weekend to catch up even more. I also started watching Futurama with Jarrett. It’s one of his favorite shows and I’ve never seen it. We’ve already watched two seasons so I would say I’m enjoying it so far.

Listening
I haven’t listened to an audiobook in weeks and I have so many piled up in my Audible library, I decided it was time to add one back in to my daily commute. I started listening to Presence by Amy Cuddy and so far I’m really loving it. She gave a pretty famous Ted Talk so listening to her describe the importance of being present in our daily tasks has been eye opening. I heavily relate to it with my job but also in my daily life as well. I just listened to the chapter on Imposter Syndrome and am still pondering it hours later. I’m not finished but I’d say this book is one I def recommend.

Anniversary Celebrations
At the beginning of the month I celebrate spending two years with Jarrett. Our actual anniversary was on a Tuesday so we took some wine to a lookout spot to watch the sunset and talk about the past year and our goals for the next year. The weekend after we went out to dinner at one of our favorite places in St. Louis (shoutout to Mission Taco and the best margaritas I’ve ever had) and played around at City Museum, which both of us had never been to but was so amazing. We paid extra for roof access and it was totally worth it! There was a ferris wheel ON THE ROOF. We just happened to be riding it at sunset. It was perfection.

All the Fall Things
This month was filled with so many fall things, even though the weather is constantly bouncing from cold to hot every week. I’m surprised I haven’t gotten sick yet. I was able to chaperone the girls field trip to the pumpkin patch, we carved pumpkins with my sister and her boyfriend and baby, Jen came over and we made witch hat cookies and we watch Hocus Pocus. Jarrett and I took the girls to our friends house in STL where we made s’mores and told ghost stories around the fire. I drank maybe 10 pumpkin spice lattes. It was a month of fall goodness even if the weather didn’t always feel that way.

Luna was lost (and found)
If you know me (or follow me on Instagram) you know I’m obsessed with my cat Luna. We take a million selfies and spend every evening on the couch cuddling in quilts. She is always trying to get outside and at the beginning of the month she escaped and was gone for two days. I was basically in mourning for 2 days. I couldn’t work and was walking up and down the street sobbing and looking for her. On day 3 of her disappearance, Morgan was playing outside and found her safe and sound in a storm drain. We brought her in and fed her and covered her in kisses. She had some scratches on her face but otherwise she was totally fine! It was the most dramatic 3 days I’ve had in awhile friends.