And just like that, we have two months left in the year and book club. What is happening.Time seems to speed up each year and I kinda wish it would slow down just a little. Like I barely got to enjoy the spookiness of October and last week my boyfriend pointed out that my kids will be 18 and moving out in 11 years, and I basically lost it and was a sobbing fool. So year, time is flying and I'm bad about prepping these book club posts for the beginning of the month. Moving on!

This month Jen chose a book that was on both of our radars. I had actually just purchased it when she suggested it for book club! I try not to read too much about books I'm interested in since I don't want to influence myself too much one way or another, but I have seen some positive reviews from people I trust on this one. We're reading The Female of the Species by Mindy McGinnis and from the description it seems right up my alley. 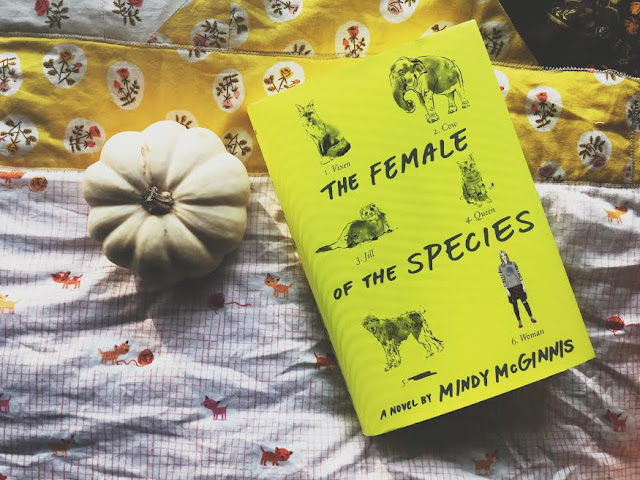 What's it all about?

Alex Craft knows how to kill someone. And she doesn’t feel bad about it.
Three years ago, when her older sister, Anna, was murdered and the killer walked free, Alex uncaged the language she knows best—the language of violence. While her own crime goes unpunished, Alex knows she can’t be trusted among other people. Not with Jack, the star athlete who wants to really know her but still feels guilty over the role he played the night Anna’s body was discovered. And not with Peekay, the preacher’s kid with a defiant streak who befriends Alex while they volunteer at an animal shelter. Not anyone.
As their senior year unfolds, Alex’s darker nature breaks out, setting these three teens on a collision course that will change their lives forever.

Ok so that seems pretty legit right? If you've read it or are planning to read with us, let us know! Hopefully we can all have a kick ass discussion at the end of the month.