September Book Club: The Wrath and The Dawn 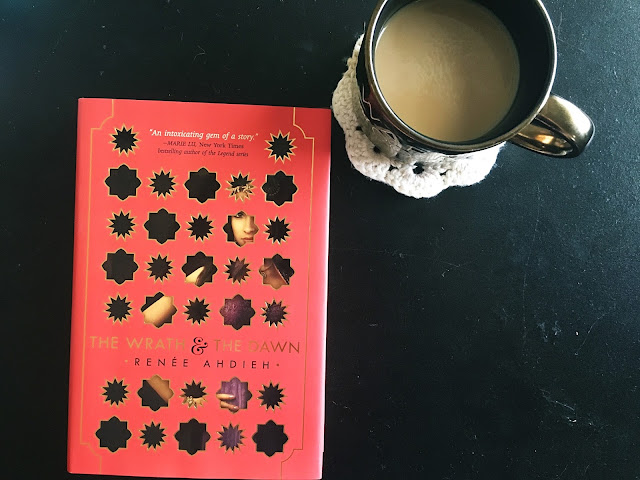 How ready are you for fall? I love summer, but I'm ready for some cooler temps and less mosquitos tbh. I've already been indulging in pumpkin spice lattes from my local coffee stop while I've been off work so all I need now is some boots and scarves and I'm ready to go.

It feels so weird to be writing a book club selection post after the summer reread. As amazing as the reread was, I'm excited to jump back into some new book club picks! After spending the summer at Hogwarts, we've decided to check out The Wrath and The Dawn by Renee Andieh in September.
This book was recommended to me by my friend Austin who reads a lot of the same YA I do and we had a ton of fun this summer gushing over all the books we've loved recently. Jen also happened to own this book and I've been wanting to crack it open since I bought it a few months ago.

Description from Goodreads
In a land ruled by a murderous boy-king, each dawn brings heartache to a new family. Khalid, the eighteen-year-old Caliph of Khorasan, is a monster. Each night he takes a new bride only to have a silk cord wrapped around her throat come morning. When sixteen-year-old Shahrzad's dearest friend falls victim to Khalid, Shahrzad vows vengeance and volunteers to be his next bride. Shahrzad is determined not only to stay alive, but to end the caliph's reign of terror once and for all.Night after night, Shahrzad beguiles Khalid, weaving stories that enchant, ensuring her survival, though she knows each dawn could be her last. But something she never expected begins to happen: Khalid is nothing like what she'd imagined him to be. This monster is a boy with a tormented heart. Incredibly, Shahrzad finds herself falling in love. How is this possible? It's an unforgivable betrayal. Still, Shahrzad has come to understand all is not as it seems in this palace of marble and stone. She resolves to uncover whatever secrets lurk and, despite her love, be ready to take Khalid's life as retribution for the many lives he's stolen. Can their love survive this world of stories and secrets?Inspired by A Thousand and One Nights, The Wrath and the Dawn is a sumptuous and enthralling read from beginning to end.

Join us for book club this September and we will meet up to discuss all things book related at the end of the month!