Ok guys, let's talk about something super serious for a minute: Harry Potter.  I feel like you can tell a lot about a person based on their opinion of Harry Potter.  If the person doesn't fall all over themselves fangirling or boying about this amazing fandom, then they probably aren't a good person and you should find some new friends. Seriously. (Ok, maybe not seriously but this is the best series ever, can we at least agree on that?!)

For both Heather and I, we go way back with Harry Potter--like back to middle school way back. Back when there were only 2 books released and you agonizingly had to wait for each book to be released. I obsessively reread each book before each release.  Therefore, the first half of the series got a lot of love but the second half has been read way less. Harry Potter is such a well thought out fantasy series that every time you read it, you pick up on something new which basically blows you mind after so many rereads.  Anyway, with the release of The Cursed Child this summer and the fact that next summer marks the 10 year anniversary of the release of the last book, we decided it was due time to reread the entire Harry Potter series over the summer! 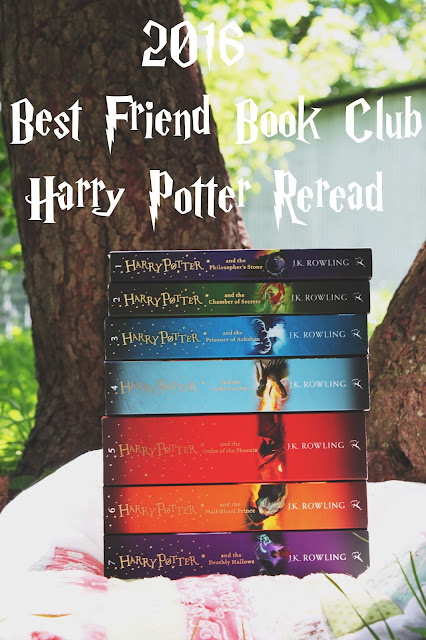 I know, you are basically jumping up and down with excitement, right? We are super pumped about this reread, not only because we are re-exploring one of our favorite all times series ever, but because we both recently have obtained the UK version of the Harry Potter books and they are just beautiful.  I could literally stare at them for hours. 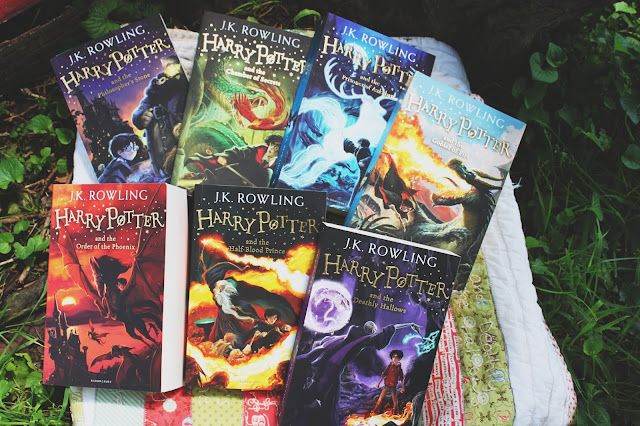 Ok, in case you have been living under a rock for the last 15 years, I've included a synopsis of the series:

Imagine a school in a castle filled with moving staircases, a sport played on flying broomsticks, an evil wizard intent on domination, an ordinary boy who’s the hero of a whole world he doesn’t know. This is the story that comes to life in the marvelous Harry Potter series by J. K. Rowling.
The Dark Lord, Voldemort, tried to murder Harry when he was just a baby—but he failed, killing Harry’s parents but leaving him with a lightning-bolt scar. After Voldemort’s disappearance, Harry is sent to live with his nasty aunt and uncle, far away from any hint of magic. But at the age of eleven, he is invited to attend Hogwarts School of Witchcraft and Wizardry, and a magical world opens before him.
Each of the seven books in the series chronicles one year in Harry’s adventures at Hogwarts and his battle against Lord Voldemort. Harry makes two marvelous best friends named Ron Weasley and Hermione Granger. He studies topics like Transfiguration and Potions under wise headmaster Albus Dumbledore and the malevolent Severus Snape. He becomes expert at a game called Quidditch; encounters incredible creatures like phoenixes and dragons; and discovers an entire Wizarding universe hidden just out of sight, as prone to the darker aspects of human experience as our own, but brightened by a quirky original magic.
And slowly, Harry unravels the mysteries of his original confrontation with Voldemort: why the Dark Lord tried to kill him, how he lived… and what he must do to survive another encounter.
(via Scholastic)﻿
﻿ 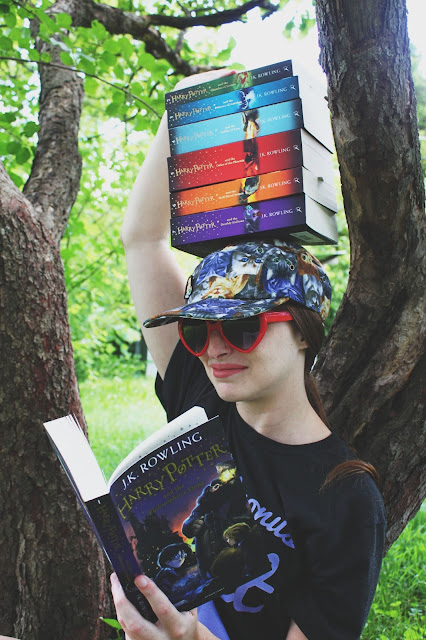 The best HP picture the world will ever see.

Ok, so I know a 7 book reread can seem super daunting, but no need to have a mini Harry Potter inspired freak out.  We are going to read them over the course of the entire summer, or June, July and August if you will. For June, we will start with The Philosopher's Stone, The Chamber of Secret's and, my all time favorite, The Prisoner of Azkaban. The first few books are significantly smaller than the latter books so we are jamming the first three into June. 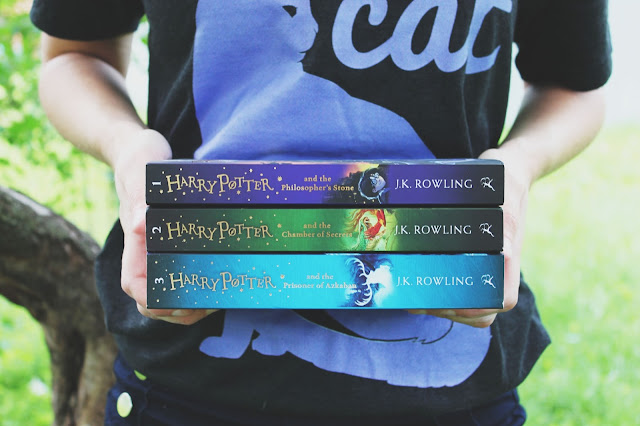 We are also planning on doing some Harry Potter inspired crafts, HP birthday party (July 31st ya'll!) and possibly attending a release party for The Curse Child.  As you can probably tell, I've been on a mission to buy as many Harry Potter themed fashions as I can and I'm hoping to add even more to my collection over the summer.  We are super pumped to be revisiting one of our favorite stories from our childhood and really hope you experience this journey with us! I promise it will be full of laughter as well as tears, lots of tears.  NO SPOILERS THOUGH!

The Hogwarts Express is pulling out of the station TODAY so let's leave this Muggle world behind! Hope to see you at Hogwarts!!!  Good luck with the Sorting!!!