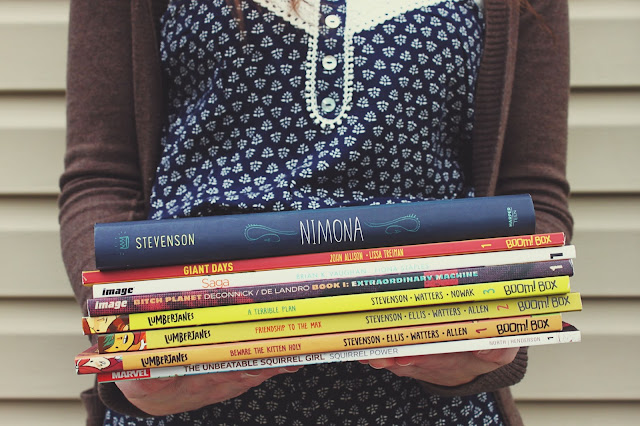 Ok, guys, today I want to talk about one of my all time favorite things in my nerdy life: comic books. Comic books never even entered into my radar before.  Then a few started popping up on my instagram and goodreads feeds and I got mad curious. Plus my favorite author, Rainbow Rowell, is releasing a graphic novel later this year so I had to see what this junk was all about. I decided to pick a couple that looked super awesome and up my alley and I immediately fell in love. They make me giggle like nothing else.  I think my love of comic books has rubbed on off Heather, as well as her daughter Morgan.  I really get a kick out of trading comic books with a 6 year old. I've read some spectacular ones and some not so good ones and today I thought I would talk about the ones I would personally recommend to everyone, but definitely to the ladies in particular.

1.  Lumberjanes. This was the comic that started the addiction.  It is just so cute! Imagine a female only summer camp where you and your besties go on lots of adventures, drive your camp counselor crazy and fight all the supernatural creatures, like yetis and whatnot. And it has great catch phrases like "What the Junk" and "Friendship to the Max!".  So obviously my response to everything is "What the Junk!?" even if no one else gets the reference. Solid 5 out 5 kitten holies for me

2.  Giant Days.  I'm going to make a bold statement and say this is my favorite comic book series to date.  It's about 3 very different girls rooming together at college for the first time.  One girl is super nerdy and was raised super religiously, I keep picturing a doomsday cult in my head. The other two are a tad more "normal" in regards to what you think about college students.  It is hilarious to watch their hijinks as the try to navigate college life as independent ladies.  5 out of 5 book clubs for me!

3.  The Unbeatable Squirrel Girl.  This one is actually a Marvel, superhero comic.  For some reason, I had a preconceived notion that I would not be into superheros and man was I wrong. Squirrel girl is officially my favorite superhero, ever!  With catch phrases like "Eat Nuts and Kick Butts", I don't know how she couldn't be.  Squirrel Girl, I mean Doreen, is attempting to blend into society by enrolling in college and living a "normal life" but normal and Squirrel Girl just do not go together. Plus her roommate is obsessed with her cat which I just love probably because I'm also pretty obsessed with my cats.  And her ultimate squirrel weapon is the best.  I'd give this one 5 out of 5 squirrels.

4.  Nimona.  To be fair, Nimona is more of a graphic novel but I'm including it in this list because it is probably the best graphic novel, ever. Nimona is a supervillian sidekick. She is ruthless and super mysterious. Like, I personally would not question her past or try to fight her. But she has such amazing energy at the same time.  She is a great companion for Lord Ballister Blakheart, the supervillian, who is a bit more broody than she is.  Their adventures are seriously laugh out loud funny.  I think even Lord Ballister is a little worried about what Nimona might do next.  She is such a fire cracker! 5 our of 5 sharks, ALL THE WAY!!!!  Please Noelle, write more graphic novels!!

Honorable Mentions:  Bitch Planet & Saga.  I also thought both of these comics were great but if I had to pick my favorites, the 4 listed above would tumble out of my mouth without thinking. I think both of these series rang in around 4 stars for me but I plan on continuing both series because they really were enjoyable.

I still feel like I'm pretty new to the comic book world.  I'm sure I've just hit the tip of the iceberg of what is out there. What comics are must reads for you? Let me know in the comments and I'll be sure to check them out! And who knows, it might already be in my amazon wishlist and I just need your influence to help me pull the trigger.  Influence me!