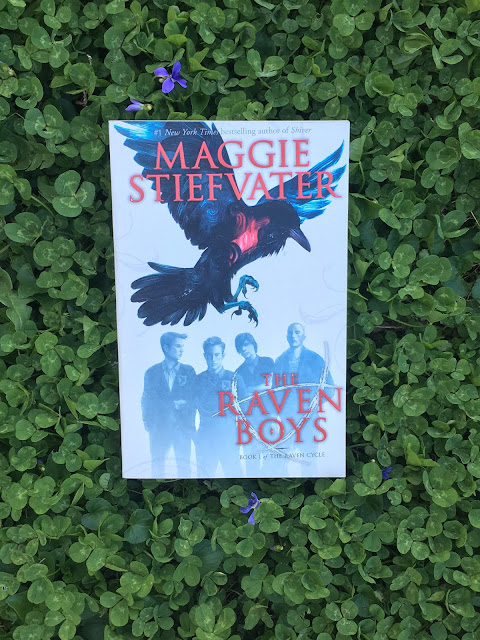 Hey friends! Can you believe it is already April? Who wants to join us on another epic reread/finishing up of a series?! I know we throw epic around pretty willy nilly around here but this is a legit epic fucking book/series. Maybe that will show you how serious I am about this being epic, especially since I'm pretty sure my Mom reads here on occasion (waves to proud mother of a profane adult child).  Like, this series is probably in my top 3 series of all time.  I would randomly recommend this series to a stranger on the street.  It is one of the most original stories I have ever read. I can't even lump it into some sort of category. It needs to be in a "it's fucking epic" category. Let me put my fangirling to a halt for a second and get to the specifics.  We will be rereading the first 3 books of this series (The Raven Boys, The Dream Thieves and Blue Lily, Lily Blue) as well as The Raven King, which is being released on April 26, 2016. Mark your calendars or just go ahead and preorder like the rest of us obsessed book lovers have.

Book Description of The Raven Boys
Every year, Blue Sargent stands next to her clairvoyant mother as the soon-to-be dead walk past. Blue never sees them--until this year, when a boy emerges from the dark and speaks to her.

His name is Gansey, a rich student at Aglionby, the local private school. Blue has a policy of staying away from Aglionby boys. Known as Raven Boys, they can only mean trouble.

But Blue is drawn to Gansey, in a way she can't entirely explain. He is on a quest that has encompassed three other Raven Boys: Adam, the scholarship student who resents the privilege around him; Ronan, the fierce soul whose emotions range from anger to despair; and Noah, the taciturn watcher who notices many things but says very little.

For as long as she can remember, Blue has been warned that she will cause her true love to die. She doesn't believe in true love, and never thought this would be a problem. But as her life becomes caught up in the strange and sinister world of the Raven Boys, she's not so sure anymore.﻿

I was pretty lucky to stumble across this series right before book 2 was being released and I fell head over heels in love with all the characters in this series.  The world building is also phenomenal. The wait in between books has been excruciating, especially this last one which was a good 18 month wait. It has seriously been torture! Like, why Maggie, just why? At least you aren't George R. R. Martining us. Who is joining us on this epic reread and who is about to make this epic journey for the first time? Let us know in the comments, yo!