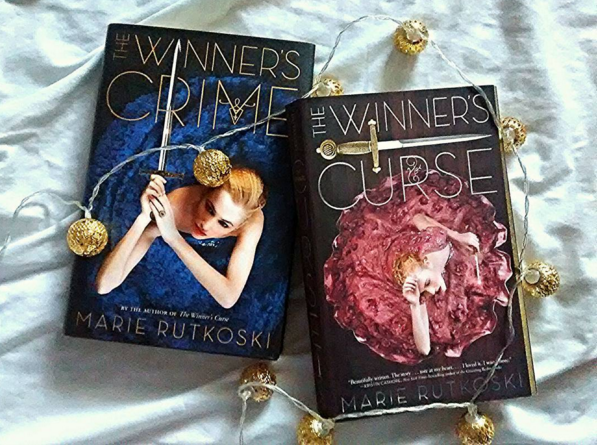 
Hello friends! Another month, another book club! We will post our Passenger discussion from February at the end of the week, but let's get into what we chose for March. This month we are rereading The Winner's Curse and The Winner's Crime by Marie Rutkoski to prepare for the release of The Winner's Kiss on March 29th.


Book Description of The Winner's Curse
Winning what you want may cost you everything you love...

As a general’s daughter in a vast empire that revels in war and enslaves those it conquers, seventeen-year-old Kestrel has two choices: she can join the military or get married. But Kestrel has other intentions.

One day, she is startled to find a kindred spirit in a young slave up for auction. Arin’s eyes seem to defy everything and everyone. Following her instinct, Kestrel buys him—with unexpected consequences. It’s not long before she has to hide her growing love for Arin.

But he, too, has a secret, and Kestrel quickly learns that the price she paid for a fellow human is much higher than she ever could have imagined.

Set in a richly imagined new world, The Winner’s Curse by Marie Rutkoski is a story of deadly games where everything is at stake, and the gamble is whether you will keep your head or lose your heart.


I have actually only read The Winner's Curse so far but I'm excited to catch up in the series! This was one of my favorite reads a few years ago and the covers are so gorgeous that I don't mind one bit having them on my bookshelf. I know 3 books is a large commitment but even if you just check out the first book I think it's definitely worth it. Have you read this series yet? Are you planning on checking it out? Let's chat in the comments!!