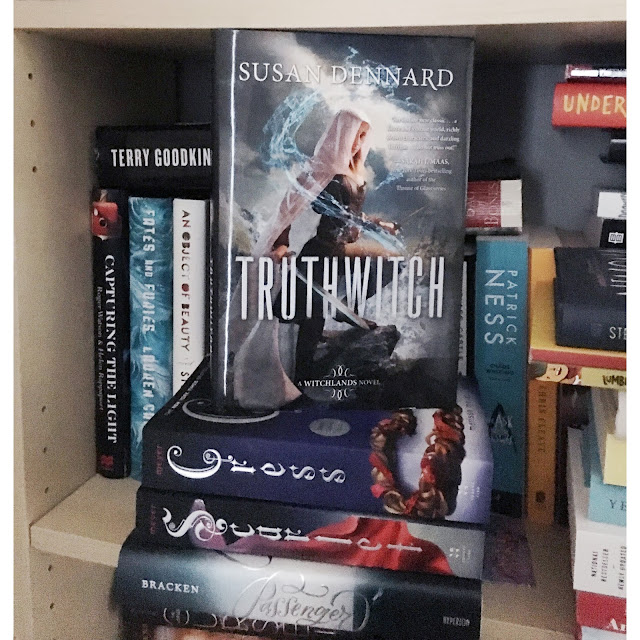 Happy Friday friends! If they would hand out awards for bloggers who constantly never post book discussions in the month they take place and we would win every time.  However, we are really working on being more consistent with our posts to bring you discussions right at the end of the month before the next book club pick. We really took it down to the wire this month since I didn't even finish the book until yesterday! Jen is a trooper and we busted out this discussion yesterday afternoon. Today we are discussing our January book club pick Truthwitch by Susan Dennard. For the first time on the blog, we had differing opinions on this one, but it was still really fun to discuss and to compare our reading experiences. Check it out below and let's discuss even more in the comments!

Book Description
On a continent ruled by three empires, some are born with a “witchery”, a magical skill that sets them apart from others.In the Witchlands, there are almost as many types of magic as there are ways to get in trouble—as two desperate young women know all too well.Safiya is a Truthwitch, able to discern truth from lie. It’s a powerful magic that many would kill to have on their side, especially amongst the nobility to which Safi was born. So Safi must keep her gift hidden, lest she be used as a pawn in the struggle between empires.Iseult, a Threadwitch, can see the invisible ties that bind and entangle the lives around her—but she cannot see the bonds that touch her own heart. Her unlikely friendship with Safi has taken her from life as an outcast into one of reckless adventure, where she is a cool, wary balance to Safi’s hotheaded impulsiveness.Safi and Iseult just want to be free to live their own lives, but war is coming to the Witchlands. With the help of the cunning Prince Merik (a Windwitch and ship’s captain) and the hindrance of a Bloodwitch bent on revenge, the friends must fight emperors, princes, and mercenaries alike, who will stop at nothing to get their hands on a Truthwitch.
Jen's Reaction in GIF form

Heather
Ok let's do this! The book discussion of Truthwitch is commencing! How refreshing and awesome was it to read a book focused around the friendship of Threadsisters Safi and Isuelt?!


Jen
You know, it was really refreshing to read a fantasy book that is centered around a friendship instead of a possible romance situation.  There are time for love stories and time for ass kicking stories. I was glad to see this was more of an ass kicking story. Plus, I kind of pretended we were Izi & Safi the whole time I was reading it.

Heather
Yes! You are my real life Threadsister for sure! I do think it was very refreshing to read a story about kick ass women. I especially loved the focus on friendship. I loved that Safi and Izi never needed saving from men, they were the ones doing the saving for each other. I did love the slight hint of romance between Safi and Merick in the book. It was touching and kind of sexy without being cheesy.

Jen
[I would agree with that completely. The romance wasn't cheesy at all. I love how Safi challenged Merick and didn't always follows his orders, like during the scene with the sea foxes.  She did whatever she had to do to save her Threadsister regardless of what a man told her to do,  And yea, the fact that those girls could hold their own and didn't need rescuing was pretty fantastic.


Heather
[1):I think it was one of the more believable romances in fantasy books that we've read. I'm excited to see where it goes next. Oh man, the Sea Foxes were crazy! Such a cool monster to have in the books, for sure. I think another thing I really liked was the different types of witches and how they worked together in the world. Just learning about the different abilities was amazing. I think one complaint from me would be I would have liked to learn more about the history of the world and the Witchlands, more about the different kinds of magic.


Jen
Oh man, I think the Sea Fox scene was my favorite scene in the whole book. Safi was kicking so much ass and for some reason Sea Foxes are intriguing as hell. And the oddest thing is, the very next book I picked up had Sea Foxes in it too.  I agree that the world building wasn't the best in this book. I think the author could have done a better job of explaining the history as well as the different types of magic. I did feel a tad lost about all the witches' magic in general.  I'm sure it will be explained more fully in the books to come but it would have been nice if the author could have slowed the pace of the story down a little bit to fit in some extra world building.  World building is pretty important for my fantasy reads.


Heather
Two books with Sea Foxes? Awesome! Yes, I think that this book would have benefited from a little extra world building. I think it did get kind of confusing at times. Like I can understand why a Bloodwitch should be feared, but a Truthwitch seems like such an unreliable power for multiple countries to be fighting over. I'm hoping for more clarification in the series as it goes on. Speaking of Bloodwitch, I am 100% into and on board for anything involving Aeduan. He is my favorite from this book, the best, most fleshed out character in my opinion. I'm most interested to see where his story goes as the series goes on. Did you have a favorite character?


Jen
Yea, I definitely couldn't understand why the Truthwitch was so much more in demand than other witches simply because it was very unreliable at times.  And yea, the Bloodwitch, Aeduan,was such a ruthless character and a force not to be reckoned with.  I really did enjoy his character! But I think my favorite character was Isuelt. The whole puppeteer storyline really had me intrigued especially since they had already kind of labeled Safi as the "special" one when it turns out Isuelt very much has her own thing going on.  I really enjoyed the scene where she had to flee from her mother's village. It reminded me of a cult and you know how obsessed I get about cults.


Heather
om):I really hope that the different types of witches and their values are mentioned more in other books as the series goes on. Aeduan is my #1. He's the best and I like that he is a conflicted villain who could turn out to be good. I also agree that Isuelt was the most interesting of the two. I felt like her powers and storyline were much more compelling than Safi's. I only wish she could see that her mother really did love her! I'm hoping that's resolved in a later book as well!


Ok let's get to our final thoughts. Any remaining things you want to mention that we haven't discussed? Also what would you rate this book out of 5 stars?

Jen
I would be highly disappointed if the differently types of witches weren't completely dissected in the upcoming books.

I think the only other thing I would like to touch on is how fast paced the book was. Even though I felt like the story did flow really well, I did feel like Safi and Izi were basically running from Aeduan the entire time and it was a little hard for me to catch my breath at times.

Even though the world building was a tad weak for my liking, I thought the story was super original and I still am in love with the notion of Threadbrothers and Threadsisters.  I honestly can't wait for the continuation of this story.  Honestly, it rang in around 4 stars for me, but I decided to bump it up to 4.5 because Sea Foxes are badass. I still can't get that scene out of my head. Where does it rank for you, friend?

Heather
I feel like I agree with everything you mentioned. I need more dissection of witches in future books, I thought the pace was a little too fast at times as well, and Threadbrothers/Threadsisters are such a cool concept. I also loved the concept of Heart Threads binding people in love.

I think for me, this book falls at 3.5 stars. I enjoyed the book and the story, but I had a hard time really getting lost in the book. I do want to mention though that this could be due to my mindset. You know that over the last week I was waiting to hear about a new job opportunity and found it very hard to focus on anything. It might just be that I was trying to read this book at a time in my life where I was not able to focus like I should, but until I reread it before the next installment, I'm going to leave it at the 3.5 stars. I would definitely say it was an enjoyable read. The focus on friendship was such a welcome change of pace from other fantasy series we've read in the past. I'm definitely glad we choose this for January and am very interested to see where the series goes from here.

Jen
):It will be interesting to see if or how your review changes next year when you reread it before the next installment. And man, I really understand how hard it can be to focus and fully absorb a book when you have a lot of mental distractions going on.  I was able to read Truthwitch within a few days during a really calm time in my life so I was pretty much completely immersed in the tale. Also, this isn't my first encounter with Susan Dennard. I read the first book of her other series and didn't really care for it so I was pleasantly surprised I like this one so much. Susan has definitely redeemed herself with this bright start to a fantasy series.


Heather
):I am also interested to see if my rating changes if I read it at a different time in my life, a less crazy time. I don't want my rating or my saying I couldn't get as immersed in it as I had hoped to come across that I didn't enjoy it. I definitely think it's worth picking up and checking out. I'm impressed with Susan Dennard for sure and am excited to see where she takes this series!
Posted by Heather at 4:33 PM