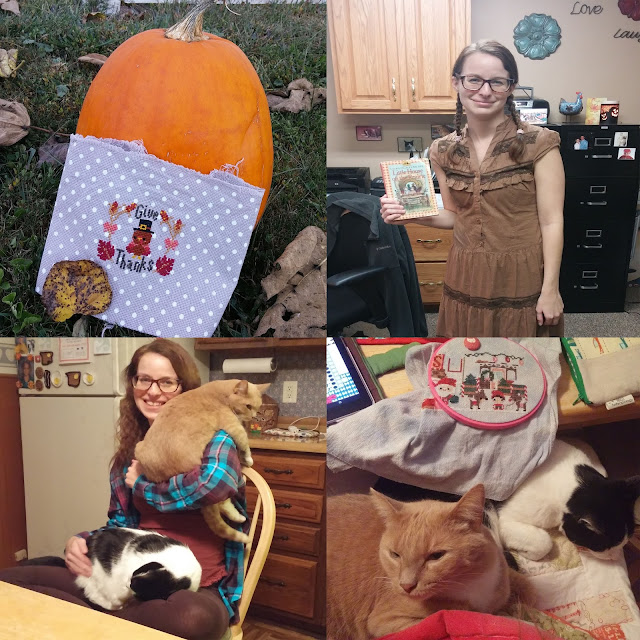 Read:  I read some really good books in October and that isn't even counting book club books.  Heather and I had plans to meet Rainbow Rowell and David Levithan late in the month so I squeezed in Every Day, by David Levithan. The premise was super cool but for some reason I got hung up on the supernatural element not being explained which is really my own issue.  I read Why Not Me by Mindy Kaling who is basically my celebrity bestie. She is hilarious without even trying.  I also read The Impossible Theory of Ana & Zak by Brian Katcher which was super quirky and nerdy and I loved it.  I was able to squeeze in a couple scary books toward the end of the month.  I went with The Madman's Daughter by Megan Shepherd, which I found disturbing as fuck, and Asylum by Madeleine Roux, which was tame as hell.  I'm super into finding kindle book deals and each of these books were $1.99 (with the exception of Mindy, which I borrowed from Heather).

Watched:  I broke out of my sitcom mode this month and indulged in some horror flicks which usually aren't my cup of tea.  I've had it built up in my head that horror movies were just too mature for me to handle but I decided that I'm an adult, dammit, and I'm going to put on my big girls pants and watch some horror flicks.  I started with Scream (I'm a little embarrassed to say this was my first ever viewing) and I ended up laughing through the entire movie.  I think from watching all the Game of Thrones and The Walking Dead episodes, I've become impervious to gore.  I also watched House of a Thousand Corpses on my husband's recommendation. It was horrifyingly creepy and  young Chris Hardwick played one of the teenagers who gets abducted. I at least enjoyed rooting for the villains to kill Chris Hardwick, which SPOILER ALERT totes happens.  Josh and I also started rewatching Breaking Bad because Heisenberg is a bad ass.

Listening:  Does my 90's Pandora station count? Just kidding! I'm a pretty avid cross-stitcher (NERD ALERT!), which requires cuddly kitties in my lap, and I like to listen to comedy specials sometimes while I stitch among other things.  Amy Schumer had a new special on HBO this month which I had to watch the night it aired.  I love Amy's feminist ways and the way she is able to say things that used to only be acceptable coming out of a man's mouth.  She is liberating, hilarious and makes me want to sensor myself less. She is full of female empowerment!

Also this month:
*Shopping Trips!! I was lucky enough to get to go on two shopping trips this month and both were at the mall.  I tend to be more of a homebody and I do most of my shopping online so twice in one month is A LOT for me.  I had a blast both times, blew my budget but I can proudly say, my 90's style fall and winter wardrobe is damn near complete.

*Rainbow Rowell Book Signing!!!!!!  Man, you guys are probably going to get tired hearing about the Rainbow Rowell book signing, but it was honestly the best event I've ever gone too.  I'll try to reserve most of my fangirling for later, but it was so cool to feel like you were surrounded by your kind of people.  Plus Rainbow complimented by cat sweater and I'm so glad I had Heather there keep me from melting into a puddle of happiness or embarrassing myself further!  I had quite the fangirl moment!

*Laura Ingalls!!!! The Little House on the Prairie was my favorite series as a child (this goes back before Harry Potter, of course!) so I took this Halloween as my opportunity to be Laura Ingalls.  The 13 year girl that lives in my heart squealed. Thank goodness for horrible fashion trends (prairie dresses) because I was able to put this outfit together from my horribly unorganized closet. 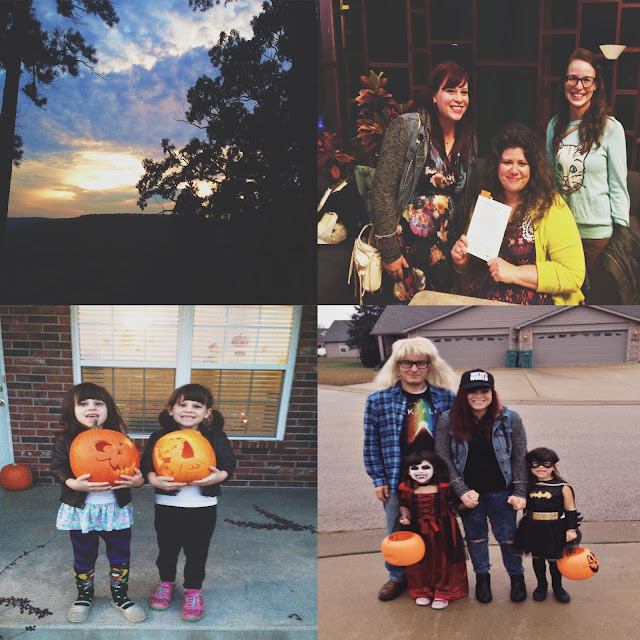 Read: I didn't get to read as many scary books this October but I did fit in the horror anthology Slasher Girls, Monster Boys and The Graveyard Book by Neil Gaiman. Both were really great, especially The Graveyard Book. That one is just dying to be a Tim Burton movie. The anthology was full of super creepy short stories and I was really happy to be able to read a bunch of smaller horror stories.

Watched: Horror movies non stop yo! I really loved getting to revisit Halloween and Scream. We watched a lot of new horror as well. I enjoyed Creep and The Ward, both of which are on Netflix.  I think my favorite movie I saw this month was When Harry Met Sally. I had never seen it before and I was like a heart eyed emoji the whole time. I want to watch it a million more times.

Listening: I started listening to the The Black Tapes podcast this month. I found myself genuinely creeped out while listening to it and getting ready in the morning. It follows a journalist investigating the black tape mysteries of a Dr. Richard Strand, who has his own shady past. They just wrapped season one and I'm so ready for season two! Plus the episodes are around 40 minutes each so they are some of the shorter episodes of podcasts I listen to.

Also this month:
* Halloween Party! I hosted a Halloween party with my roommate and it ended up being a blast. I made a killer bourbon sangria that was out of this world. I also dressed up as Wayne and Garth with my boyfriend Jarrett (see costumes above that my kids insisted we wear trick or treating) and it was so fun to have someone be really into a couples costume. They even got us free drinks at a bar on Halloween night so hands down a killer costume!

*Anniversary Celebrations At the beginning of the month I celebrated my one year anniversary with Jarrett. We took some wine we bought in New York this summer and some cheese, bread and grapes to a lookout to watch the sunset together. It was really awesome to sit and reflect on our year together and talk about how excited we are to see how the next year unfolds. Last year on our way to our first date I took a picture of the sunset so it was a nice bit of symmetry that we ended up watching the sunset together this year.

*Rainbow Rowell book event Jen and I bought tickets to "A Book Discussion with Rainbow Rowell and David Leviathan" hosted by an independent book store in STL. It was basically the best thing ever and it was so cool to be surrounded by other book nerds like ourselves. The whole event was so much more than expected and for us to see our favorite author, get to talk to her for a second, and get our picture with her, well we are basically dead from happiness now.

We hope you had a good month too and we would love to hear about it! Any book/movie/tv show/podcast suggestions for November? Leave them in the comments!
Posted by Heather at 10:24 AM