It's our very first book discussion post! Are you as excited as we are?!

{Accurate gif representation of how we feel}

Our August book club focused on the series Throne of Glass by Sara J Maas (Books include Throne of Glass, Crown of Midnight, Heir of Fire, and The Assassin's Blade). We actually read this series for book club in 2014 but the next book in the series comes out tomorrow so we wanted to reread the series so the story was fresh in our minds. It was the perfect decision, especially since we read the novella The Assassin's Blade for the first time and it just got us even more excited for the Queen of Shadows release! We stay relatively spoiler free but there might be some small ones if you haven't read the series yet. Let's get started! 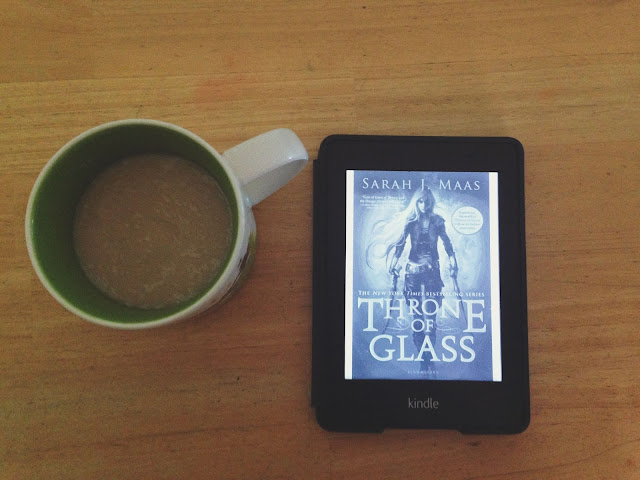 About Throne of Glass:
After serving out a year of hard labor in the salt mines of Endovier for her crimes, 18-year-old assassin Celaena Sardothien is dragged before the Crown Prince. Prince Dorian offers her her freedom on one condition: she must act as his champion in a competition to find a new royal assassin.Her opponents are men-thieves and assassins and warriors from across the empire, each sponsored by a member of the king's council. If she beats her opponents in a series of eliminations, she'll serve the kingdom for three years and then be granted her freedom. Celaena finds her training sessions with the captain of the guard, Westfall, challenging and exhilirating. But she's bored stiff by court life. Things get a little more interesting when the prince starts to show interest in her... but it's the gruff Captain Westfall who seems to understand her best.Then one of the other contestants turns up dead... quickly followed by another. Can Celaena figure out who the killer is before she becomes a victim? As the young assassin investigates, her search leads her to discover a greater destiny than she could possibly have imagined.

Heather
Ok! I'm so excited to chat with you about Throne of Glass, though I know we've done it a TON before. So beginning with Throne of Glass, tell me your favorite part of the book and something you think could be better

We have discussed this series a bunch but it is just so good. I'm so glad we decided to reread it before the release of Queen of Shadows. Honestly, I really just love Celaena. She is one of the strongest female characters I've encountered in a fantasy series. She definitely has her faults but she is pretty kick ass. My least favorite part was the love connection between Celaena and Dorian. I think even from early on she had a connection with Chaol and I was happy to see her kick Dorian to the curb.

I agree, this reread has been a blast and really gotten me pumped for Queen of Shadows! And I also 100% am Team Chaol. I think he is honestly the best choice for a romance with Celaena. He understands her in a way that Dorian doesnt, though I do really love Dorian as a friend/ally for Caleana. I think the first book in the series did an amazing job of setting up this world with so many layers that unfold in following books, but you maybe don't realize how they relate at the time. Sarah J. Maas is amazing at world building. With a lot of series I get kind of tired of them but with Throne of Glass, you never feel bored and keep wanting to see what unfolds! I love that this book was a little lighter than they can get later, but doesn't sacrifice story or anything like that! How about the friendship between Celaena and Nehemia?

Exactly! I totally support Dorian as an ally\friend but Chaol just really gets her and doesn't put up with her bull crap. I'm also always amazed by her world building. We are only half way in and I can't even imagine where she is going to take us but I'm interested to see how everything relates with past events. She kind of reminds me of J. K. Rowling in that sense. When I read Harry Potter so many things would happen and the significance of past events would just slap you in the face. It amazes me. I really love the relationship between Celaena and Nehemia. They are both strong woman who do whatever they have to to achieve their goals. I was pretty shocked how quickly their friendship ended. That was really rough on Celaena.

I loved Assassin's Blade for the fact that it had so many past events that are referenced, but when you read the series, you pick up on those hints now and it kind of pulls everything together! And I agree! I don't think Celaena has had many friends that she can trust or let in, but it was so nice to see her friendship with Nehemia grow. Though I do feel bad that there were so many secrets between them that Celaena doesn't find out until later, and especially when she was kind of manipulated in such a brutal fashion. And since we are on the topic, I think Crown of Midnight has been my favorite in the series so far! It was just so jam packed with action and unexpected twists. It was heartbreaking but so so good!

I agree. I though Assassin's Blade felt a little disjointed at first, once it hit it's stride and you discovered some of the horrible events of her past you really felt like more of her actions made more sense. She is brutal for a reason. The first time I read the series I didn't like Nehemia as much because of how secretive she was. But when I reread it I could see how happy they made each other and I hated it when they fought! And the way things played out was really heartbreaking and ended far to quickly. I would also say Crown of Midnight has been my favorite. So many great twists and turns. There was never a dull moment, even when Celaena was alone with Chaol.

Nehemia's actions in Crown of Midnight really drive Celaena in Heir of Fire. And while I hate that Nehemia wasn't as open with Celaena as she should have been, I can see how she was trying to do the best thing she could for her friend by getting her to stop fighting her past and who she is and embrace her destiny in a way. I don't know if Nehemia hadn't taken the steps she did, if Celaena would have really accepted her place and what she needs to do. Let's talk about Heir of Fire for a second. I forgot how much I loved Rowan and getting to see Celaena really grow. And really Dorian and Chaol grow as well. I think Heir of Fire is really the turning point in the series. Lines are drawn and all our people end up in places at the end that you might not have been expecting. I fully expect the second half of this series to be EPIC. I don't know how we are going to stand waiting for each year between books! How would you personally rate this series? Use whatever rating system you want ☺

Man, Heir of Fire is so complex. I absolutely love watching each of the story lines evolve. There was so much I had forgotten from this book, probably due to its complexity. However, I think the witches storyline was my favorite in this book.  It felt so original to me. I just loved Manon and her Wyvern. The bar is set so high for the last couple of books in this series. It has been a pretty crazy, brutal adventure so far and I just can't wait to see what Sarah J. Maas has up her sleeves for us. I have a feeling we are going to be doing yearly countdowns in anticipation of each release, and it will be torture! I would say on a 5 star rating scale I give this series, thus far, a 5 star rating. Yea, the characters have their faults, but the world building of this series blows me away. I didn't expect to like this series quite so much but it truly is one of my favorites. I'm very much anticipating Tuesday.

I agree so much! I feel like the stakes were really amped up and I honestly don't know what to expect on Tuesday from Queen of Shadows! I feel like we will be freaking out for our next book review. I wish calling in sick with a "books hangover" was legit! I am with you on the 5 star rating friend! I feel like rereading this series was so awesome, I can definitely say it is one of my favorites series. Sarah J. Maas is a world building goddess and I am so ready to see where we go next with this series! I definitely think the witches added a new layer to this story and world and I'm interested to see how they fit in as we go one. I will say, which I've told you before, I wasn't as into the witch story line the second time around, which is all on me and could just be that I was at the end of my reread and just not feeling them as much, though I do think they are interesting and am excited to see where that story line goes from here. Ok for our final thoughts, who would you recommend this series to?

I definitely think the witches added a new layer to this story and world and I'm interested to see how they fit in as we go one. I will say, which I've told you before, I wasn't as into the witch story line the second time around, which is all on me and could just be that I was at the end of my reread and just not feeling them as much, though I do think they are interesting and am excited to see where that story line goes from here.

I agree. It wasn't a storyline in was expecting and it adds I liked how different fantastical creatures\cultures were introduced. I'm still loving that storyline just as much this time around. Adulting is going to be really hard this week because I would much rather read with a cat in my lap for however long it takes to finish Queen of Shadows. I would recommend this to anyone that loves long, complex series. Anyone who  loves strong female characters and isn't bothered by some brutality. I'm not really sure what to expect from Queen if Shadows but I know it will be amazing!

I feel like I should win a record for saying "agreed" so many times in this review chat! I agreed with your recommendations. I think lovers of fantasy series with complex characters and fantastic world building should check this out. It might be more Young Adult, but honestly I think any adults would enjoy it, as evidenced by us liking it! Any thing else you want to mention before we wrap this up?

We need a thesaurus! And I agree, I think all ages groups can really appreciate this fantasy series. There is that word again! Ha-ha! And I have nothing further.

If this sounds interesting and you haven't read the series yet, Throne of Glass is only 99 cents for Kindle right now so what are you waiting for?! Thanks again for stopping by our first book discussion! Let's chat about books in the comments friends!