Hey guys! I've been very busy the last few months (which you can probably tell due to long breaks between posting) but I have something pretty cool to share with ya'll.

I live in a house that was built in the 1920's. It is structurally sound but very, very outdated. We are actually coming up on our 10 year anniversary of owning this home (I seriously can't believe this - I was a baby (21) when we bought it).  We had so many plans when we first bought this place. Most of which involved lots of demolition and doing a complete overhaul. I won't point fingers, but motivation dwindled pretty fast after the first couple of years.  Lately, I've been in extreme nesting mode and have become OBSESSED with making this house my own and the epitome of coziness.  I did a few minor updates last summer and then I plunged into a much more time consuming project.

I decided to tear up all the carpeting in the attic room (which I use as a master bedroom) because I realized there was old hardwood floor underneath.  I mostly wanted to tear the carpet out, not because it was outdated, but because it smelt really musty and gross. The biggest obstacle?  The carpet was GLUED to the old hardwood. Why? I'll never understand.

I wasn't great at documenting before pictures. I was just so over it, a little embarrassed and just ready for it to be gone.  I went through some of my ancient photos (from my olddddd blog) and found this one. At least you get an idea of the carpet I was dealing with.  Basically it was the carpet of every old attic room in American. (I'm not kidding, I spend a lot of time looking at houses on realtor.com and I see this carpet a lot.) 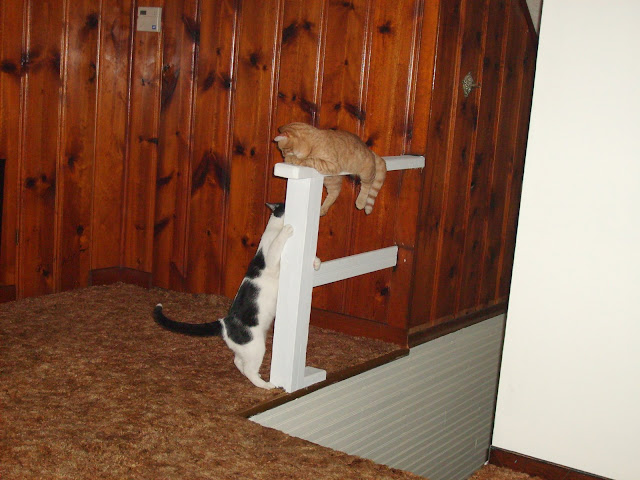 As everyone does when they are plotting house updates, you jump on the pinterest to see what's trending.  I was certain there was a way to update the hardwood instead of replacing it.  The hardwood wasn't in the best shape, but it was mostly intact with the exception of a trap door which I think was for an old stove pipe? (Old houses are fun.) I didn't think it was worth the expense of refinishing the floors since they were in such rough shape.  During my pinteresting, I fell in love with the idea of painting the hardwood. To me, it felt like that would really breath some new life into this neglected floor. 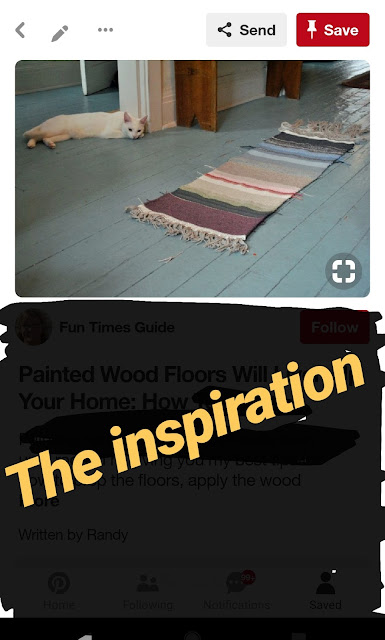 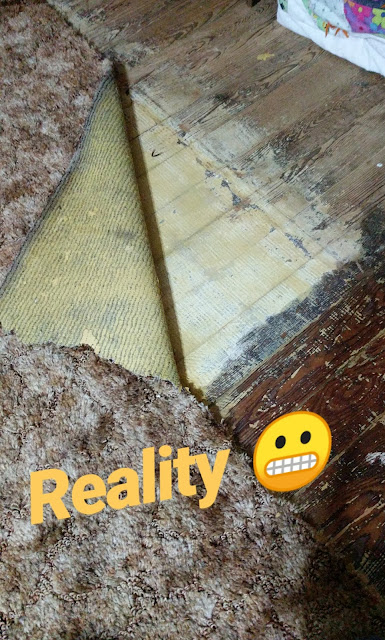 The carpet and glue removal was so time consuming and honestly just really disgusting. I could only do smallish sections at a time because it took so much effort and strength to scrub that glue off. I also opted not to use any harsh chemicals in the removal for my own health and for the health of my cats. I'm unsure if that would have sped the process up or not, but wasn't something worth risking in my opinion.  I eventually worked up the stamina to do larger chunks at a time but the carpet/glue removal took me about four months to complete because I could only work on it during weekends. 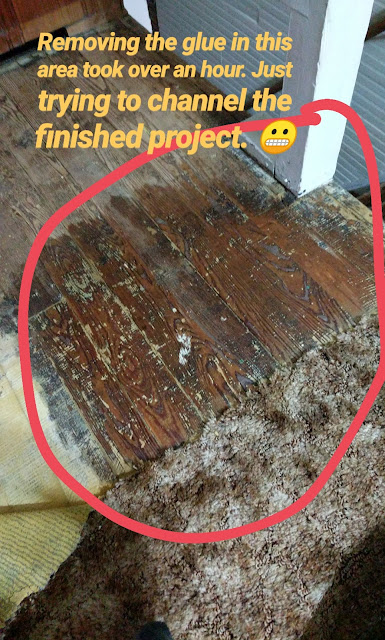 The day I finished removing the carpet was honestly one of the happiest days of my life.  It was such a tedious, time consuming part of the project that would leave my arms and wrists sore for days on end.  I was able to watch an entire season of Friends while doing the removal process so I guess it could have been worse.

This trap door was also discovered. I'm pretty sure it was for a kitchen stove pipe that originally went all the way through the roof.  I toyed with closing up the trap door but eventually decided against it. At some point I might clean out the debris and turn it into a hiding place for my treasures or whatnot.  Sometimes it can be hard for me to eliminate old charm in houses.  For now, I'm covering it with a rug for safe keeping. 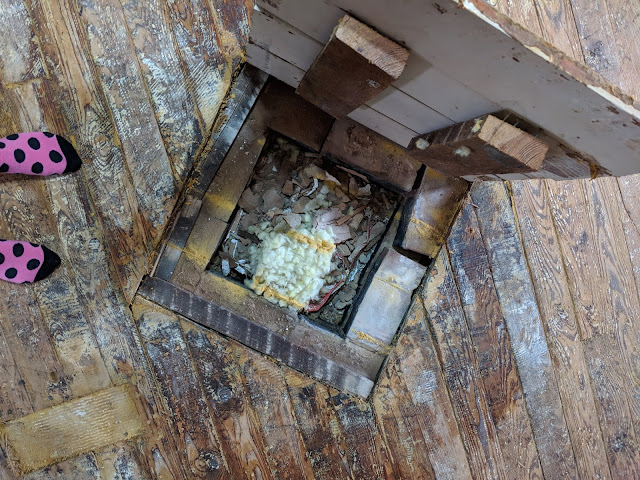 I started this process mid September. I finished tearing out the carpet/scrubbing off the glue just a couple of days before Christmas.  I then took the month of January off to relax.  The first weekend in February I got to work prepping the room to be painted. I was also able to give the walls a quick refresh that same weekend. I choose to keep the walls white since I really wanted an airy feel.

This was right before I painted the floors. 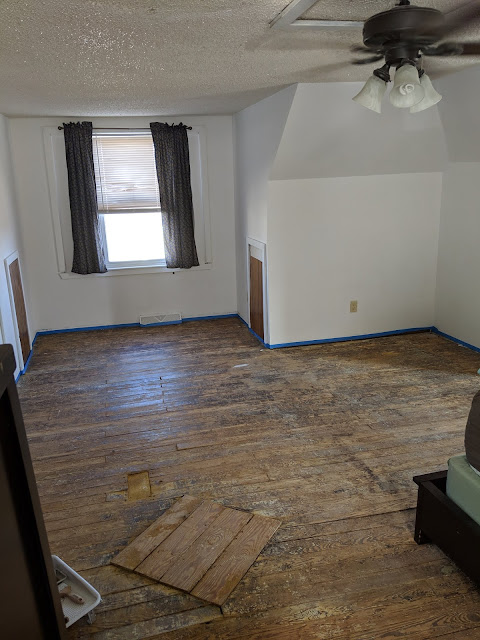 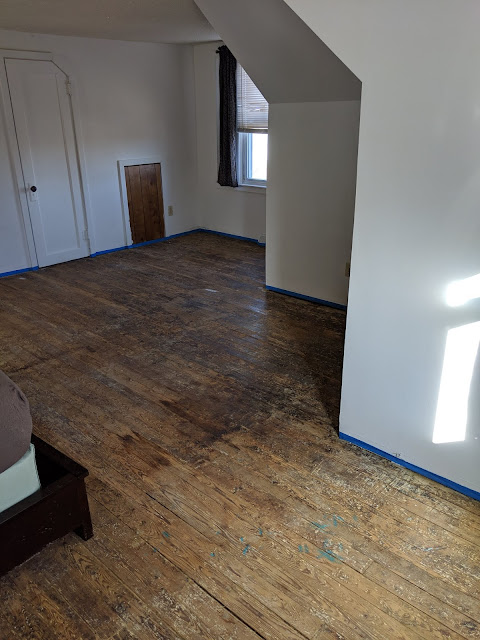 I ended up having to paint the room in two sections over a course of two weekends. I hate moving furniture up and down steps so I simply moved it all to one end and painted the other. Then the following weekend I moved the furniture to the freshly painted side and tackled the rest.  I put two coats on the entire thing.  I suggest using an outside porch paint when painting hardwood floors. It is supposed to handle wear and tear better. 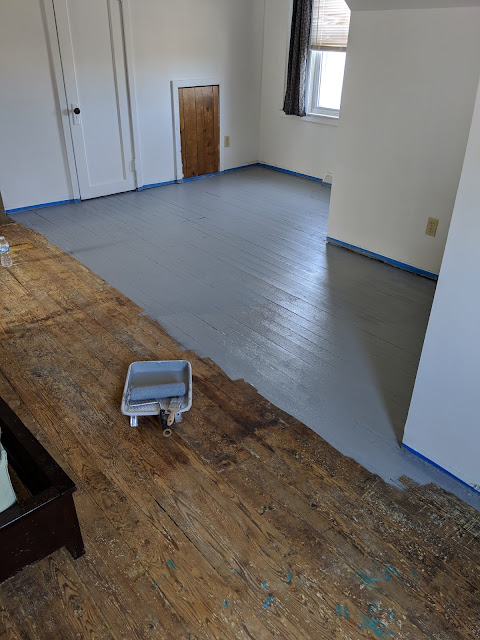 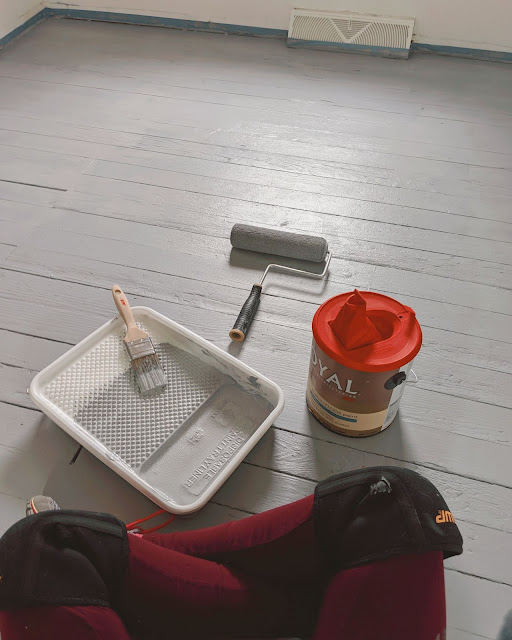 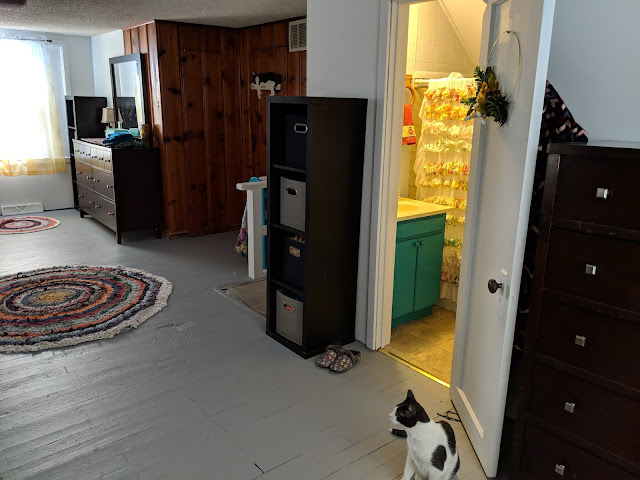 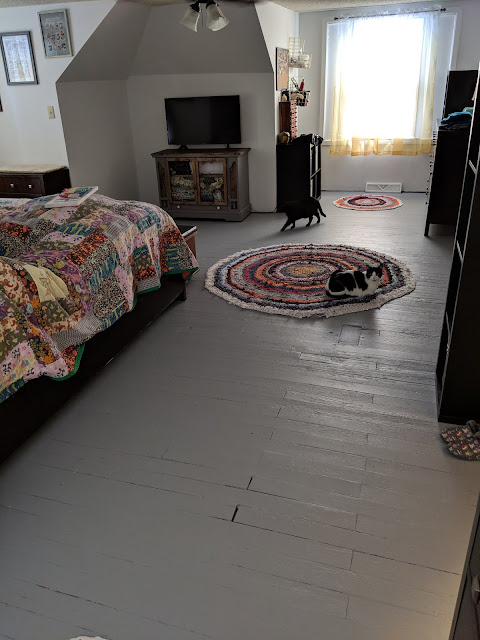 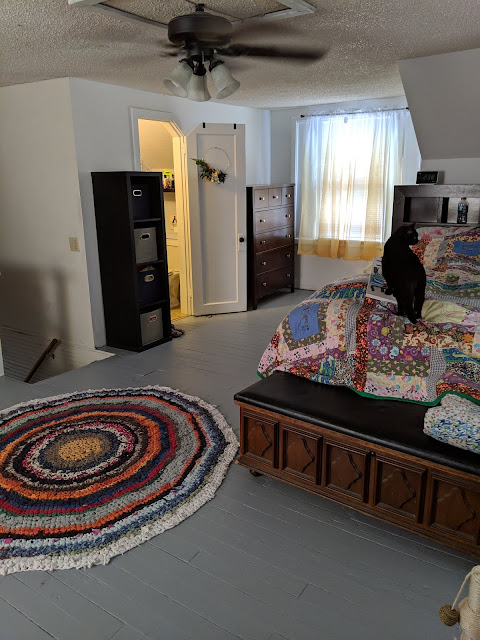 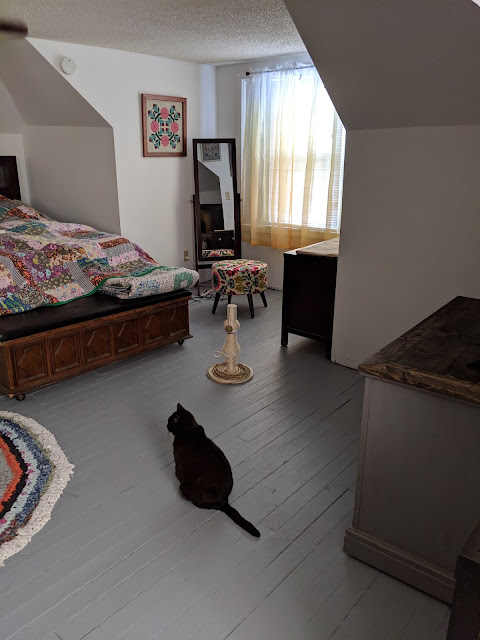 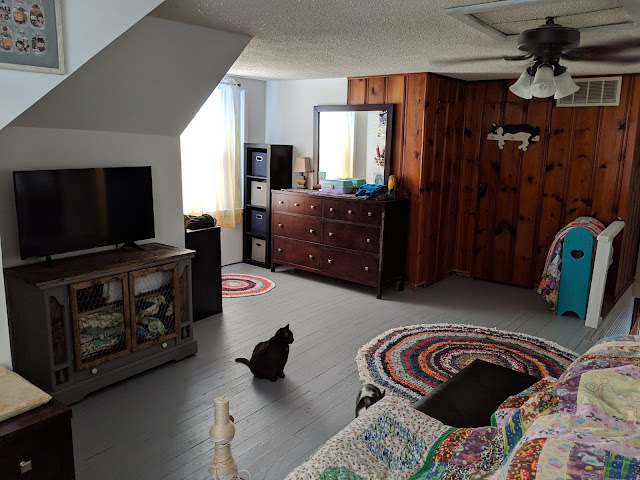 This project honestly turned out better than I could have imagine. It was definitely worth those few months of hard labor.  I rewarded myself with new curtains, a sassy new ottoman a new tv stand/quilt display repurposed from an old tv cabinet. This is my haven and I couldn't be prouder.

I would love to cover up the popcorn ceiling and add a couple of build ins (think window seat in the window that has the mirror and ottoman and some built in shelving at the top of the stairs where the white railing is) but I'm definitely satisfied for now.

I have many more house projects up my sleeves!  My goal at the beginning of the year was to bring a certain level of coziness to the house by doing some minor updating. I'm not sure where to start next, but I'll definitely be tackling the stairwell soon since the stairs are covered in the same carpet and it's got to go.  I feel obsessed about making this house the best it can be so stay tuned for more updates!
Posted by Jenafaye at 9:12 AM