For one month only, we are combining January & February rewinds into one post. Partly because I am terrible at planning and partly because both months were not sure exciting. Enjoy! 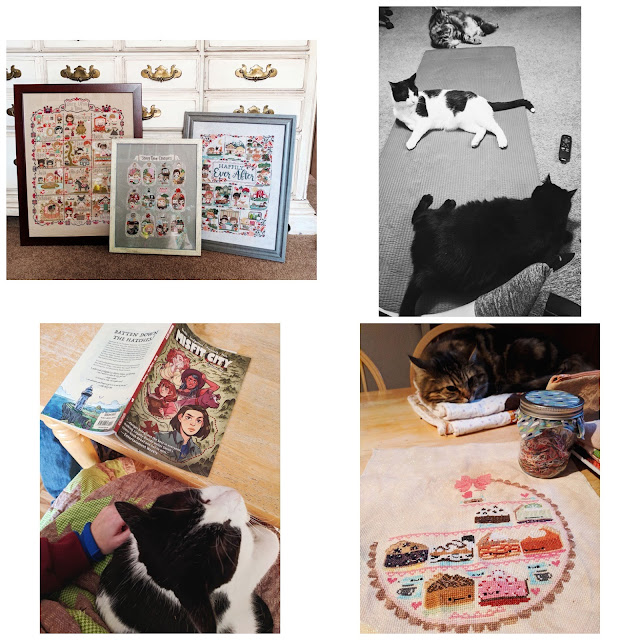 Read
I read a bunch of comics the last couple of months. I hands down recommend MisFit City & BackStagers.  They both have major Lumberjanes vibes, which also released a new volume in February. I also read Dear Martin by Nic Stone and it was pretty great. I really enjoy learning about things from another's perspective. It helps keep me humble and helps me to constantly remember to check my privilege.  I read a bunch more, but these stood out the most.

Watched
I feel like I watched a bunch of tv the last couple of months. I finished watching Big Love on HBO which I really enjoyed. I've recently dived into Keeping Up With the Kardashians and Charmed. I think Charmed is going to become my new favorite, and just in time for the reboot.  I've also been watching a little Grace & Frankie which I've also really enjoyed.

Listened
Man, I've been listening to everything. I listed to quite a few episode of My Favorite Murder and more recently I'm been on an audiobook kick. I really love listening to non-fiction. I've listened to Rose McGowan's, Gabrielle Union's and Tiffany Haddish's autobiographies. I highly recommend them all, but I though Brave (Rose McGowan's) was phenomenal and so eye opening as to the power hierarchy structure of Hollywood. I also really enjoyed The Stranger Beside Me by Ann Rule which was about Ted Bundy. All great listens!

Cross Stitch Galore
Not only did I spend a lot of time watching tv and trying to catch up on various cross stitch projects, I was also able to do some true finishing.  Taking it from finished stitching to actual art.  I love to stitch but I'm not as great about finishing the projects afterwards.  I had let a bunch of finished projects collect and it just felt so nice to clear them out and to be able to admire them every day.

New Face Routine
I've been working on my nightly routine for a while.  I got some solid advice from my Bestie and have really enjoyed playing with the new products and having a legit cool down nightly routine.  I also got brave and experimented with some new makeup products too. It's been fun and very rewarding.  Sometimes you just need to try out some new things to feel like yourself again.

Mini Staycation
In February we took a couple of long weekends and it was so refreshing. I was able to get some things done around the house that normally gets neglected due to hectic schedules and life.  My husband hung a new shelf for me in my bathroom (which legit made my month), I organized all my hygiene products and my tees and just spent some quality time with my beau. I could use more relaxing times like that. 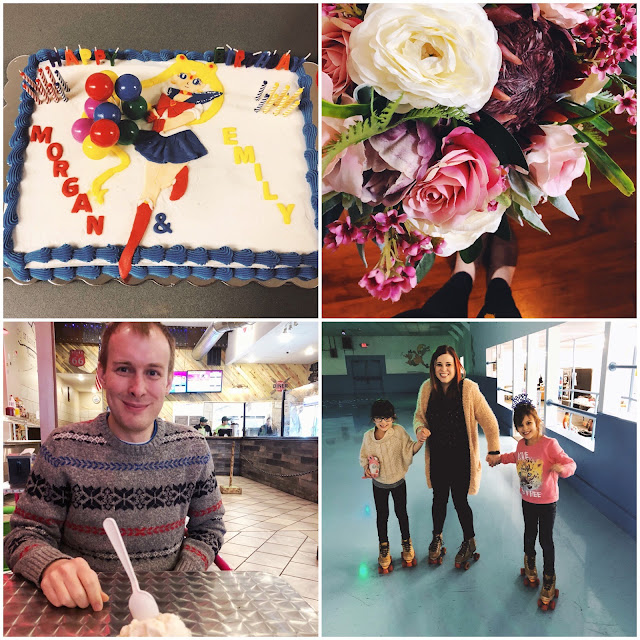 Read
I really enjoyed the new Archie comic Jen loaned me, though it was not faithful to the Riverdale reboot. Still super enjoyable and a quick read. I also read Eligible by Curtis Sittenfeld which is a Pride and Prejudice retelling with some Bachelor type content thrown in, which is right up my alley. I'm trying to read before bed lately and I feel like it's really helping me get through more ebooks that I seem to collect on my Kindle.

Watched
These past few months have been dominated by The Bachelor/Bachelor Winter Games & Oscar nominated movies. The Bachelor has been boring, though of course we are so close to "the most dramatic finale in Bachelor history" so it's almost over. Bachelor Winter Games was a delight and I'm so happy we got that thrown in to the mix, though it did make for two weeks with 6ish hours of Bachelor related content, which is a lot.

Jarrett and I also try to watch as many Oscar nominees as we can each year and we make a bet to see who can predict the most winners. I won this year for the second year in a row which brings our tally to 3-1 with me in a hefty lead. I'm thinking of making a post with my most loved movies from this years list so stay tuned!

Listened
Along with my Bachelor tv viewing, I listen to a lot of Bachelor podcasts. A new favorite is Two Black Girls, One Rose which brings some much needs diversity to the mostly white world of The Bachelor. Plus they are hilarious and I've laughed out loud multiple times. They have so much fun with it, even while tearing it to shreds.

E&M turned 8
My babes turned 8 years old, which seems crazy. How did they get so big, so quick? I'm honestly enjoying this time in our lives. They are so funny and smart, with lots of interesting commentary on the things they read/watch. Jen has started loaning them comics, which is a whole different book club we have going now. We had a party at the skating rink for their birthday and it was a blast. The girls invited friends from school and we had this whole rink to ourselves. Jen and I even took some outfit photos, which I think Jarrett suggested as a joke, but obviously we were in to it. I'm so excited to see what this year is like.

Wedding plans
Look, I never wanted to be someone who talks non stop about their wedding like everyone cares about it as much as I do, because only like maybe 4 people do. But at this stage in the game, I'm doing a lot of wedding stuff. I'm trying to balance getting things done with not getting overwhelmed by what I still need to do. It definitely ramped up in February but I'm feeling good about the progress I'm making and the end result.

Home Organization
I've really gotten on a big organization kick at home. I'm tired of having so much stuff and while I feel like I say that a lot, I'm finally starting to make some progress on it. I organized my bedside table which has made me so much happier when I go into my bedroom. Next up I'm tackling the girls bookshelf and my shoe collection. I try to pick one small project to tackle each weekend so I'm doing a little at a time but I feel like it's huge progress.