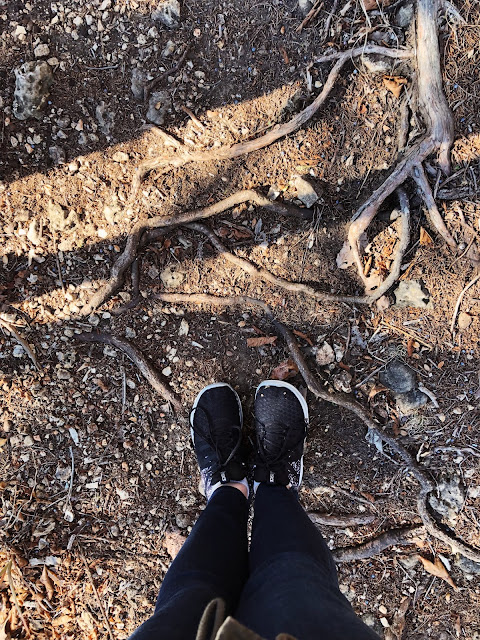 For the past few years, I've made a birthday goals list. Usually it corresponds with my age, like "31 before 31" so I have 31 goals to complete before my 31st birthday. That's a lot of goals y'all. 2017 was my hardest year personally, but I feel like I'm past the worst of it and am in a really good place now.  I also realized that the long list of birthday goals was a little too unwieldy. I had some goals that were way too ambitious and some that were just thrown on there to make it to 31. I wasn't in the best headspace to focus on accomplishing things on the list, when I was struggling to deal with grief over my mom's death and dealing with a job that was draining everything good from me. Those big things took so much of my mental and physical energy that working on the goals I wrote down last December that it seemed more important to get to a healthy mental space than work on listening to one new album a week.

It feels like a lot of excuses, but ultimately the mental health I accomplished was worth more than all the other goals on that list put together. So this year I'm focusing instead on a smaller list that feels more meaningful. These a goals I've been thinking about doing and having smaller list feels so much more meaningful than trying to come up with 32 things to do before I turn 32 next December.

Explore my city (and state)
I work in St. Louis and have seen such a small part of Missouri. I want to make time to do more cool events in St. Louis. There is so much cool stuff happening here and I want to do it all! I also want to see a little more of the state I'm in. Kansas City is 4 hours from me but I've never been there. I've lived here almost my whole life and I've never traveled to another cool city 4 hours away? I want to make the most of the place I live now and take advantage of everything it has to offer.

Run a half marathon
This year running was a big part of my healing process. I recently got a gym membership close to my work and I want to get back into running after taking time off when it got colder. I want to build up some stamina and run a half marathon, something I thought I would never be able to do. After running two miles non stop this year (another thing I thought I could never do), doing "impossible" things seems a little more possible.

Create more
This year I was in a creative rut. It became so clear how much I miss creating things as it got closer to Christmas and I realized I didn't make one gift this year. I usually make one or two, maybe a Christmas craft to hang up in my house. But this year...nothing. So I want to focus on making things next year. More gifts, more things for myself, more house DIYs.

Cook my way through the Thug Kitchen cookbook
Jarrett got me this cookbook for Christmas a few years ago. So far we have made almost every soup recipe and they have all been showstoppers. I haven't even attempted the other recipes, but if the soups are crushing it like that, I want to cook the rest of it. It's a real Julia & Julia situation, but with a vegan cookbook that uses the word fuck a lot.

Get serious about skincare
It's shameful how bad I treat my skin. I wash my face maybe twice a week and just this year started using moisturizer. I want to do a better job of taking care of my skin this year. I am planning a routine and just feel like it's time to make this a priority.

Save $2K
Pretty self explanatory. I'm terrible with money. Less clothes that I don't need, more money in my savings account.

Start a podcast
This is one I've been thinking of for awhile. I have an idea and want to take the next few weeks to really flesh it out. I'm excited and scared but I feel like that's a good sign. All good ideas should be a little exciting and a little scary.

Declutter and organize
I'm so tired of being surrounded by stuff. I am an emotional shopper and it's hard to move past using shopping as a default any time I'm stressed/sad/a little drunk. I'm drawn to cozy, minimalist spaces when mine is currently the opposite of that. My intention is to slowly transition my home into a space I love.

Focus on friendships
Friendships are so important to me, but I find myself dipping out of plans because I'm tired/have to drive into STL/just want to watch Netflix on my couch. I want to be a better friend and make both old & new friendships a priority in 2018.

Learn tarot
I have a tarot deck, two books on how to read the cards, and a 2018 planner (I told you I spend way too much money). I want to start with a daily tarot card and move on from there. It's a thing that makes me feel really grounded, connected, and intentional. Healthy habits 2018 is kind of a theme here.
Posted by Heather at 1:05 PM