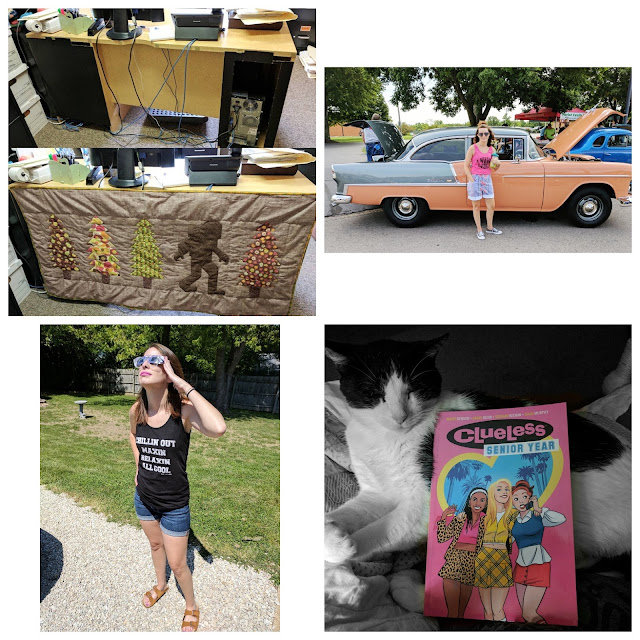 Read
I read some pretty great comics this month. Clueless was definitely at the top of my list. I even preordered it.  I'd also suggest checking out Hark! A Vagrant series. I randomly read #3 in the series (thank you library) and it was full of great pop culture references.  I got my hands on This One Summer which I also really liked.  The only real book I read other than our book club book was Scrappy Little Nobody by Anna Kendrick which I thoroughly enjoyed. I love when famous people feel relatable and Anna definitely does.

Watched
I'm full into a Pretty Little liars rewatch. I still haven't gotten spoiled on who A is and I'm so thankful. I avoid all PLL articles. I can't wait to see how this ends. I'm in the middle of season 4 for reference and I"m still watching episodes I've previously seen before but I'm getting close to where I left off.  The husband and I also watched I'm Dying Up Here on Showtime. It's a show about comedians trying to make it big and I really dug it. It has some strong female leads who were real kick ass ladies (and sometimes funnier than the guys).

Listened
I know this is going to be controversial, but I'm going to say it anyway. Look What You Made Me Do by the New Taylor Swift. I'm aware this is a blow to my street cred but I can't help it. I'm a basic ass white girl.

Also this month
Eclipse, Eclipse, Eclipse
Man, that was something.  I live just a couple of miles away from the totality line so I got to watch nature's amazing show from my back yard.  It was beautiful and amazing and time literally stood still for almost 2 minutes.  I now weirdly want to become an eclipse chaser, which I image is similar to a storm chaser except less dangerous unless not wearing the proper eye protection.  There were also so many different and fun events for this celebration that were within walking distance which was pretty cool.

Desk Refashion
I feel like I've been planning and working on this project for forever now and it is finally finished!  I put the finishing touches on it and installed it and my office looks 100% better.  It was the biggest eyesore before and now its just so fun and quirky.  A coworker even suggested making different ones for different months and seasons and I can't believe I didn't think about that on my own. Like, of course that needs to happen.

Cross Stitch Clubs & New Fall Trends
I signed up for 2 new cross stitch clubs this month that start in August. One is a Halloween pattern (duh) and the other is National Park themed. It's a companion to the one I did last year by The Frosted Pumpkin Stitchery.  I was also just going through all my Halloween decorations and I think I might actually have too many cross-stitched pieces? Can that happen? I'm also thinking maybe I need a Halloween tree? Like how cute would that be?!

I also started my fall shopping! I've already picked up some new black destroyed jeggings, 2 purses (!!), peplum tops, a velvet jacked and combat boots and black and brown pairs  of pumps. I think there was more but I'm getting embarrassed about my obvious problems. 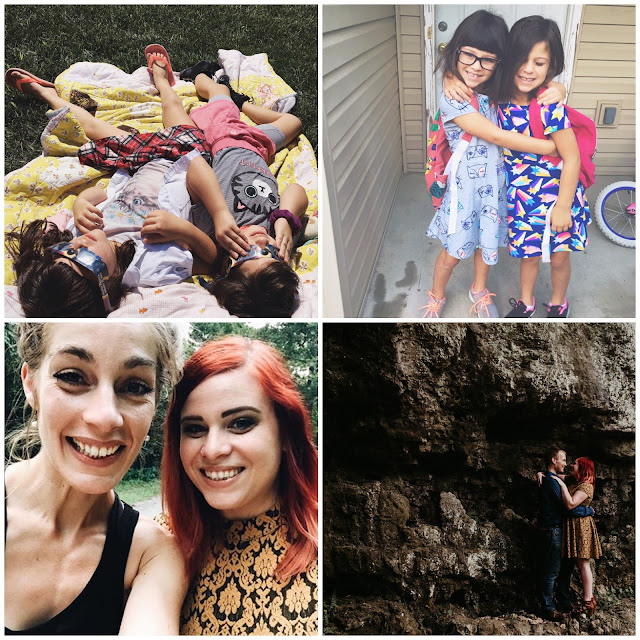 Read
I was able to read some really cool things this month. I think my favorite was Option B by Sheryl Sandberg. It was one of those books that feels like it was written just for me. It touched on grief and how it relates to your work, which is something I struggled with a lot this year. It even inspired me to suggest improvements to the bereavement policy we have at my own job, so I feel like it had such an impact on me. I have so many notes in my phone of things I wanted to remember. It was a library book but I'm planning to buy it so I can highlight all the things in my own copy when I read it over and over.

Watched
I was able to watch Glow this month and super loved it. I really liked the diversity of the cast and the different reasons each woman gravitated towards wrestling. It was also the first time I actually enjoyed Marc Maron. I tried his podcast and his show on Netflix and didn't love him, but I really enjoyed his role in Glow. I also started Scandal last week because you can never have enough Shonda Rhimes in your life tbh.

Listened
I've been pretty into the new Paramore album After Laughter this month. I've also tried to check out the new Haim album and the new Brand New album. These are 3 of my favorite bands so to have so much new music from them lately has been pretty awesome.

Also this month
Second Grade Babes
My beebs are second graders! How did this happen? It's been this huge transition to a new building and it just seems like they are so much older, even though that is crazy. I'm so excited to see how they grow this year.

Total Eclipse of the Sun
Living in small towns can be cool sometimes, which was the case with the solar eclipse this month. Our small town was in the path of totality which was maybe the coolest thing I've ever seen. I am so happy I got to share that experience with the girls and Jarrett. It was so crazy and I'm so grateful we were in a spot to see the total eclipse!

FFTW Reunion
My friend Grace (my FFTW-Friend From The Womb) was in town for a few days and it's the first time I've seen her in 3 years! I was so happy that she was able to meet Jarrett and that we were able to spend a lot of time catching up in person. We text a lot but in person hangs are the best. She also took some engagement photos of Jarrett and I while she was here. I super love how they came out and have been trying to spread out sharing them on Instagram.
Posted by Heather at 10:11 AM