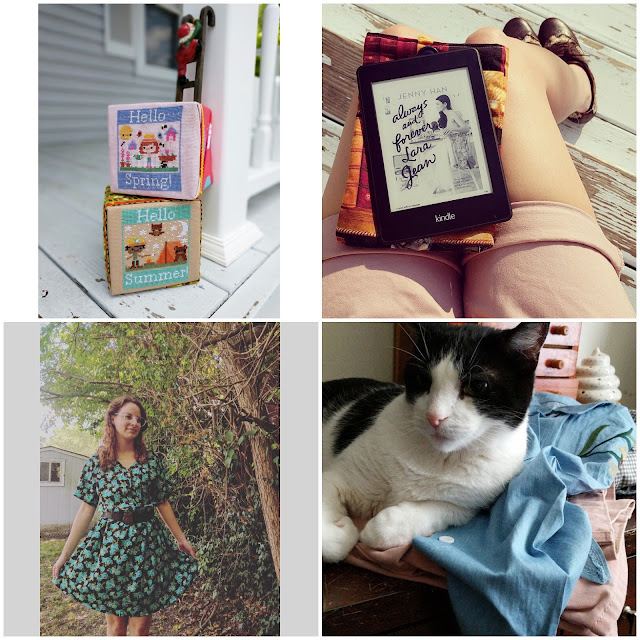 Read
I spent July catching up on the super sweet series "To All the Boy's I've Loved Before" by Jenny Han. It's a trilogy and it's sweet as hell and I literally recommend it to everyone.   It is the most perfect of light summer reads. Also, as I was reading it, the movie was announced so now I feel too cool for school having already read the series.

Watched
Ya'll, Game of Thrones started back up this month and has big a BIG deal in my house. I've also been watching some Pretty Little Liars on Netflix. I used to watch the show and then got away from it but now I'm interested in it again since the finale aired not too long ago. I'm still also obsessed with Beverly Hills 90210. Oh, also, if you get a chance, HBO has a pretty killer special on Dr. Dre and Jimmy Lovine which I highly recommend. Any type of biographical show/movie is my jam.

Listened
I'd like to tell you about this great new podcast I'm listening too but I'm still very much absorbed with Best of Friends podcast. It will forever be my jam and I just don't know if I have time in my life to listen to multiple podcasts that are currently putting out new material. There just isn't enough time!!!

Also this month
Staycation
I took an entire week off in July which is pretty out of character for me. Work life has been stressful but taking time off might have been just as stressful? The first couple of days I felt super high strung about it but I was able to mellow out and get a pretty good chill on.  I thrifted, ate out a bunch, cuddled kitties constantly, read and crafted to my heart's content. It was pretty great.

Birthday
So my birthday is right after the 4th and I literally did nothing to celebrate it. I'm not super big on JEN SPOTLIGHTS so being center of attention can be literally some of the most anxiety ridden times for me.  Spending the day at home in my own little world was the best way to spend the day. But in case you are curious, I am now 31 which seems a lot older than 30 for some rea

Porch Life
So, I've been spending a lot of time just hanging out and reading on my front porch in the sunshine during the days or watching the sun go down at night.  I even busted out some of the lawn furniture to make my time more comfy and cozy. I'm planning on leaving it out through the fall so I can cuddle under a blanket as I read in the evenings. Our street is a little noisey, but I still find it so peaceful. 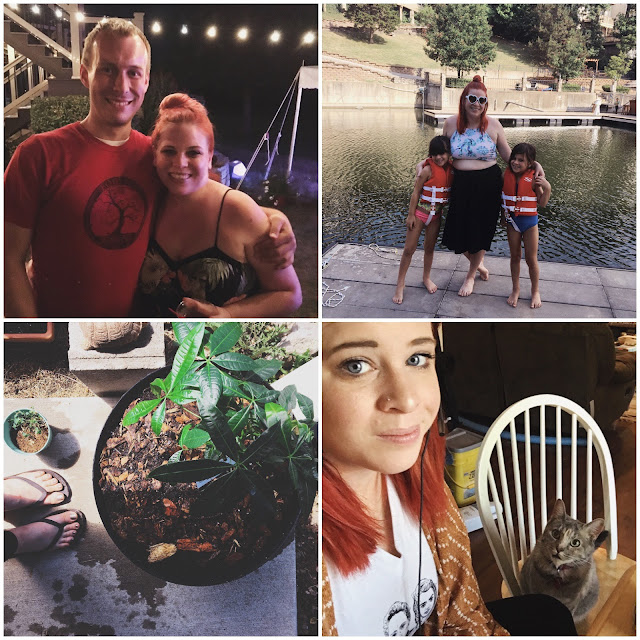 Read
Two books really grabbed me this month. The first was Surpassing Certainty: What my Twenties Taught Me by Janet Mock, which I read for feminist book club. I loved reading all about Janet's mistakes and growth in her 20s as she navigated the world as a trans woman. It's a perspective I don't have a lot of experience with so it was eye opening and I related to a lot of the struggles Janet went through, specifically about marrying young to someone in the military. I also really liked The Fact of  a Body by Alexandria Marzano-Lesnevich. It was pretty heavy, part memoir and part true crime, it examines the case of Ricky Langly, a man who struggled with pedophilia his whole life before murdering a 6 year old boy in 1992. The book goes over the case while also examining the authors own experience with sexual abuse by a relative when growing up. See, heavy shit dudes. Even with the heavy subject matter, it was captivating and a deep look into a case that I had never heard of.

Watched
I haven't been watching as many things this month, if only because by the time I get home from work, eat dinner, and maybe workout, I'm ready for bed. We did spend a weekend watching all the Paranormal Activity movies, which get worse as they go on but still have those jump scares that get me. We caught up to the current season Brooklyn Nine-Nine, which was Jarrett's pick for our short tv show we watch together. We just started Bojack Horseman for my pick since I've heard a lot of good things about it and so far I'm into it.

Also this month
One Year memorial
It feels impossible that it's already been a year since my mom died. My sister Stephanie flew into town (she lives and works at the Grand Canyon) so I was able to be together with both my sisters to do something to mark the year. Our mom was cremated and her ashes have just been sitting in my junk room (I know, I know) but we got some small urns so we could each have a part of the cremains and then had a biodegradable urn that we used to plant a tree with the remainder of her ashes. It wasn't much but we were together and it felt like the right way to spend this weekend.

Lake Days
Jarrett's sister lives in Iowa and rarely gets to make the trip to Missouri so when she was able to plan a trip to spend some time at his dads lake house, we made time to make that happen. We always have a good time at the lake and this time there was a new jet ski and some kayaks to take out on the water. It was a blast being able to swim and be on the boat and just be active for a few days. Plus it was great to get to build relationships with his niece and nephew that we don't get to see. His niece is also named Morgan, so we had a Little Morgan/Big Morgan thing happening all weekend.

Back to Work
I went back the first week of July to my full time job after being on a leave of absence. I was so anxious about it, but I've been feeling really motivated and excited to be back, which is kind of surprising. It reinforced for me how beneficial the leave was for my mental health and puts a spotlight on the work I've done to make myself well again. I definitely feel this sense of hope and belonging that I kind of lost touch with before. I've been building new relationships and working on reaching out more and not isolating myself which is my go-to reaction when I'm deep in depression. So yeah, all good things happening!
Posted by Heather at 8:00 AM