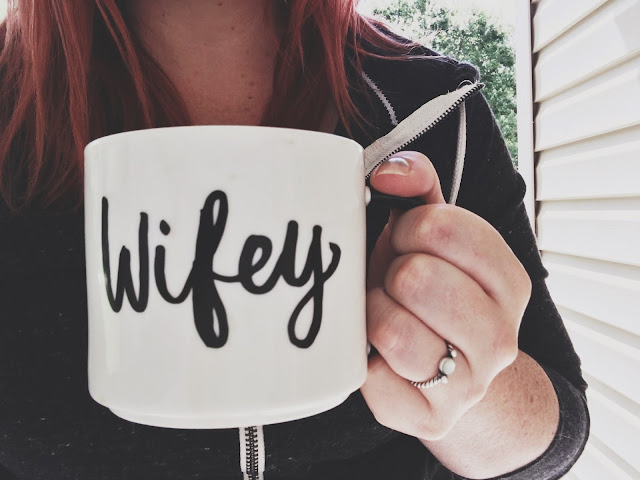 Hey friends! If we are friends on social media, I posted about this a few weeks ago so you already knew I was engaged but I wanted to share the story on here! I'm hoping to talk about all things wedding as I go through the process, but don't worry, this will not become a wedding themed blog. I love reading about other peoples experiences on blogs so I'm hoping mine is something cool too.

Our engagement story is pretty non-traditional. I didn't realize it at the time or while it was happening, but honestly it's perfect and different and exactly what I wanted. There's a huge list of things that it seems like you "have" to do when you get engaged, including the way the proposal goes.  But I say that your engagement and wedding get to be whatever you want them to be!

Jarrett and I have been talking about getting engaged since the beginning of the year. We've been living together for over a year and together for almost 3 years. We are partners in life and while marriage isn't required, it's something we both wanted. We decided it was time in February and I was showing Jarrett photos of rings I liked shortly after so he had an idea of what I wanted. I wanted something unique and different, I wasn't really crazy about getting a big diamond. I found my ring pretty easily, since I have been a fan of Rebel + Ruse for years. She's a local St. Louis silversmith and her work is beautiful. I also really love the look of moonstones so I had been stalking this ring for awhile. I was planning on buying it for myself but once the engagement talk started, I thought it would be the perfect engagement ring. I showed it to Jarrett and insisted it was the one I wanted. A few days later I went to show my sister the ring and it was sold! I was pretty sure Jarrett bought it and my suspicions were confirmed when a tiny package was delivered a week later and Jarrett hid it from me pretty quickly.

So this was February and things were happening really quickly. I was so nervous and excited, expecting a proposal basically any time we did anything. If we went hiking, I caught myself being hopeful that it was happening. I was pretty sure when we went to the Grand Canyon that he was going to propose but it came and went and nothing happened. I was a little disappointed but I knew it was going to happen sometime so I tried not to dwell on it. We talked about it a few more times and Jarrett was nervous about the proposal. He felt like there was a lot of pressure to make it this big event, something that felt huge and important as it was happening. I tired to ease his fears but I knew that he was not going to let go of the nervousness surrounding this life event. He always insisted that he was excited to be married, but the process to get there was daunting. I was totally supportive. This will be my second marriage, so I also have a lot of fears and worries related to weddings.

On May 7th, we had went to visit our best friends Robbie and Lulu to meet their new baby for the first time. Ada is perfect and wonderful and was the best cuddler. I'm pretty set on not having more kids, but she kind of gave me a low grade baby fever. The girls spent the day swimming and we got to catch up with friends. It was a great day. When we got home we decided to sit on the porch with some beers since the weather was so nice. It was sunny but not too hot and there was a nice breeze. We were just talking and Jarrett mentioned something about how our lives were so great. That no matter if we get better jobs or a bigger house or live in a city or this small town forever, our lives would always be the best. It would be nice to have those things but it wouldn't make our life together better. It's already the best. I just got this feeling as he was telling me this that this was it. We should get engaged. We should just do it. So I said, "Why don't we just decide to be engaged?" Jarrett looked surprised and asked if I was sure multiple times. I was and am 100% sure. I love Jarrett so much that I didn't want the proposal to be this thing that stressed him out and made him feel like he was pressured to pull off this huge thing. So we decided together. He got the ring, slid it on my finger and there was a lot of kissing. We were both so happy and it was seriously perfect.

So he didn't get down on one knee and ask me, but for us, this was perfect. Who says that it should be only up to the guy? That he should plan this big thing and get down on one knee? The feminist in me loves that this part of the process was not traditional and I love that we decided together and now we are just engaged. It's been an amazing few weeks. I got to celebrate with friends (thanks Lauren and Allison for the "Wifey" mug!) and telling all our friends and family has been really fun. I've been doing some venue searching but we haven't settled on a date or place or anything yet. For now it's been fun to dream about our wedding, but I'm also enjoying just being engaged. This new stage is really cool, something I didn't expect to feel any different that when we were just dating, but it totally does.
Posted by Heather at 11:38 AM