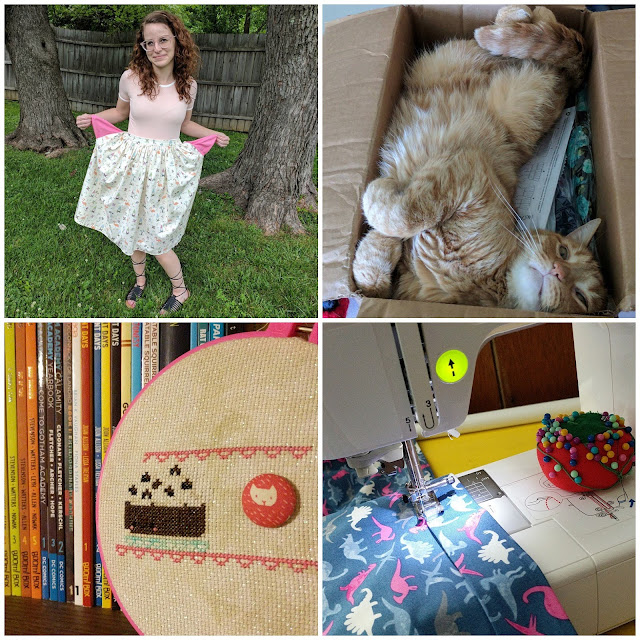 Read
My biggest read this month was A Court of Wings and Ruin. I feel kind of weird about this one. I had anticipated it's release for a whole year. I'm a major Sarah J. Maas fangirl, but man, I did not love this one. The first 2/3 of the book was clunky and slow and the remainder was pretty great. I didn't love love the ending, but I accept it. I did learn this series was getting a spin off series, set in the same world but following different characters that I believe we've already been introduced too. I'm awaiting more details but I'm sure I'll buy it, obviously.
Watched
The Handmaid's Tale! I'm a little behind now, but man, this is a great hard to watch show.  It's scary to see the parallels between the show and our current administration.  I have to watch it in short increments because it is so real!  Also started Season 3 of Kimmy Schmidt! And The Goldbergs has officially turned into my official go to show. Thank you HULU! Oh also, if you haven't watched Louis C.K.'s new Netflix standup, GET ON IT. The Magic Mike bit towards the end is seriously everything.

Listening
Gahhh! The Best of Friends Podcast has officially wrapped up it's commentary on the show friends. They've been recording since Christmas 2014--I've been listening for well over a year now and it just feels like an end of an era. Thankfully, they have plans to continue talking about random nonsense, I mean continue on to Joey. I honestly think I could listen to them be silly forever.

Also this month
1. Got a Haircut!
It has literally been almost a whole year since I got a hair cut. I'm apparently above making appointments for these things, but I was at my wits end. I risked a trip to a Great Cuts and in less than 7 minutes I was done and on my way and so much happier. Never again will I go so long between cuts!

2.  Made 3 Skirts!
Yup, I'm loooooving making my own clothes. I've always been serious about fashion and making outfits so this kind of feels like natural progression honestly. I have so many idea of outfits I want to make and this is a great outlet for me.  So far I've made a succulent, gnome and dino skirt. I randomly picked up some purple and natural striped fabric this weekend on sale. Basically the whole skirt is going to cost less than $5 and I already have mad styling ideas!

3.  Sweet as Pie Sampler
I've talked about my yearly cross stitch project before and how much I love it, yada yada. Well this year, a 2nd yearly club was created (same designers) and debuted as the Pie of the Month Club. As soon as I saw it I knew I was destined to participate. Not only do you get a pie to stitch, but you also get a pie recipe to bake. I stitched my first pie super quickly but haven't made it to the baking portion. I want to do that part too, but I honestly have less patience in the kitchen.  Either way, it's going to be a super fun project!! 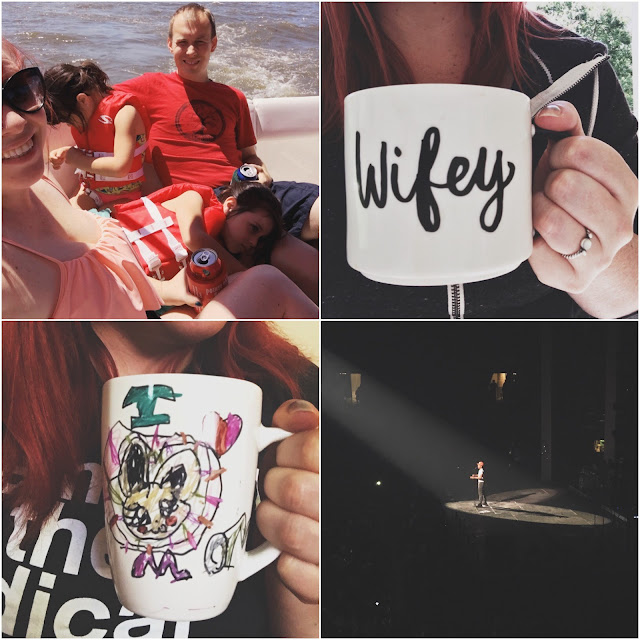 Read
This month has been kind of a weird reading month for me. I haven't been super interested in reading like I usually am. I did make some killer progress on library books, including a new favorite The Year of Magical Thinking by Joan Didion. I wasn't sure how reading a memoir on her grief during the year after her husband died suddenly from a heart attack would go over with me, since I'm still dealing with a lot of grief over my mom passing. While the circumstances of our grief are totally different, the emotions are the same. I cried multiple times when Joan was able to put into words how it feels to deal with a sudden loss of someone in your life.

Watched
Guys, I am so deep into a Pretty Little Liars binge it's not even funny. I started rewatching it as a joke with my sister, but now I'm seriously into the drama in Rosewood. I'm on season 4 now and plan to get this series completely finished by the time I go back to work in July. I also started watching Twin Peaks with Jarrett and can't wait to get more into that.

Listening
I've been doing this thing where I go on these really long walks and listen to podcasts. One of my small goals was to catch up on podcasts and this is my favorite way.  Right now I'm listening to Tanis which can be kind of creepy but it's so good and addictive. It's a serialized show exploring the myth of a place called Tanis and the various conspiracies surrounding it. I'm on season two now. It feels good to finally make it a priority after having it sitting in my subscriptions list for like a year.

Also this month
1. I got engaged!
So the biggest news of this month is that I got engaged! We've been talking about it for awhile now so it wasn't the biggest surprise, but it was still amazing and perfect and wonderful. I am planning on blogging all the sweet details (I love those kinds of posts from other people!) but for now I'm going to enjoy admiring my ring and drinking out of my "Wifey" mug some wonderful friends gifted me!

2. Sister dates
This month seems like it was all about the sister hangs. I love my sister so any time I get to spend with her is awesome. On Mother's Day we were able to go out for sushi and then we got to see Chance the Rapper, who was so amazing. His show was so high energy and fun and also moving. It was kind of on a Beyonce level honestly, which I was not expecting. Since it was our first Mother's Day without our mom, it was the perfect way to celebrate together.

3. Lake days
Jarrett's dad has a house at the Lake of the Ozarks and we were able to spend part of Memorial Day weekend there. The girls look forward to spending time at the lake every summer. The water was colder than we'd like but the girls got in anyway. We got to spend hours on the boat and even went out to eat at a place that was pretty delicious. The girls got to drive the boat and it was busy and relaxing all at once. I can't wait to spend more time there this summer. Something about being on the water is really good for the soul.
Posted by Heather at 9:25 AM