Hey--Jen here!  I'm guessing it comes as no surprise that I'm a bit of a cat lady.  I don't mean to sound ridiculous but they are basically my children. I love them, they love me and these pet relationships are some of the most fulfilling and sometimes frustrating parts of my life.

I thought it would be fun to formally introduce my kitty family to everyone. 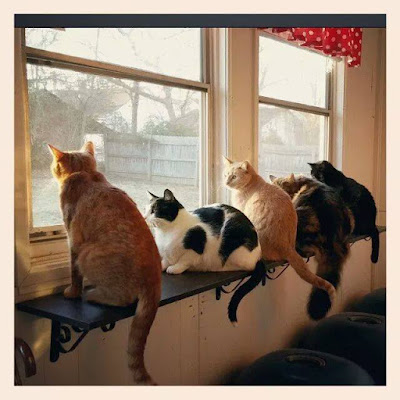 It's a very rare thing to get a picture of the entire herd assembled. New kitty windows shelves made this picture possible. 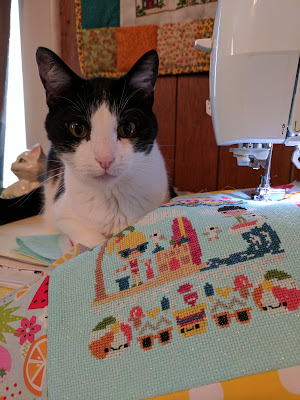 Frank is very much the leader of the pack, the alpha. He is the herder of the cats and the bully of the family. He's a typical first child. He's my side kick. I would say I'm probably his favorite human and he will do the absolute cutest things to get my attention-like turning into a kitty rolly-polly ball or allowing me to rock him like a baby.  Most of his needy behavior can be attributed to the fact I held him like a baby for the first year of his life. 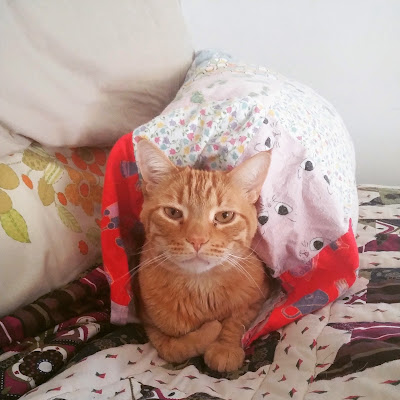 Stewie is #2 in the line up and the old man of the bunch. He is very much set in his ways and doesn't like to deal the with nonsense from the younger whipper snappers. I always imagine him as an old man yelling at the kids to get off his lawn. I adopted him to keep Frank company. He likes to burrow under anything he can and is probably the best cuddler of the group.  Lately we spend most of our mornings reading and cuddling together before the day begins. But Josh will forever be his favorite human.

Fun Fact:
When we adopted Frank and Stewie, we initially thought they were both girls and I named them Mabel and Macie (short for Mabelline & Macie Lou-such ridiculous names but I was 21!), names which my husband absolutely hated. He was secretly calling Mabel Frank the entire time. When we took Frank to get fixed, we were met with the surprise that he was a boy and very quickly determined Stewie was also.  Josh thought Frank just made the best cat name. Stewie's name was stolen from family guy, because I always think of him as an evil kitty genius.   Collectively I refer to these two as the "Original Gangstas". 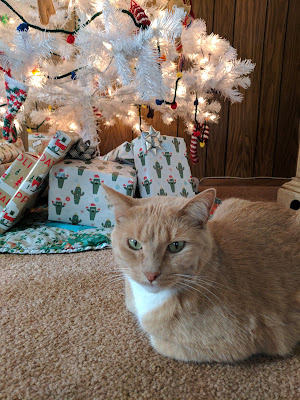 Oh Milo, can I say middle child syndrome? I don't know how to say this gently but, she is the bitchiest of the group. She is tough as nails and full of hisses. We've nick named her squirrel cat.  She came to us by appearing on our front porch at a super early age and has been known to climb door frames.  She was flea ridden and very sick. We joke that she was probably raised by squirrels during her very early life.  We rescued her, obviously, and have enjoyed her bitchiness ever since. Her name was inspired by Milo and Otis, duh.
Fun Fact:
I have to seriously watch this cat. She is an eater of thread. If I leave my sewing machine threaded, she will unwind the thread and eat as much as she can. I'm very thankful so serious emergencies have happened because of this annoying habit. 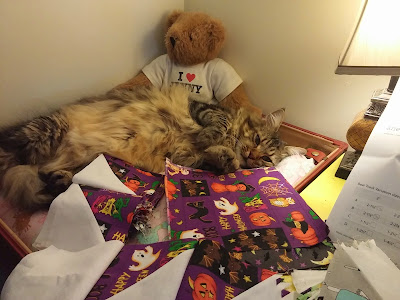 Gah! Hooch is seriously my favorite. I know you aren't supposed to do that from a parental standpoint, but I don't care. He has the absolute best personality and is hardly ever crabby. He loves everybody. He was a total accidental adoption. I accompanied a friend to the humane society to pick up a dog and BAM there was Hooch in the kitty window pawing for my attention.  He was so FLUFFY and friendly, I just had to have him.  The humane society had nicknamed him Hooch and we absolutely thought the name fit. He is quite the galoot at times, especially with his crazy tail.  It has been known to knock my glasses askew.

Fun Fact:
Hooch is part Maine Coon, which is probably why he has such an amazing temperament. Maine Coons however are plaques with health issues.  We are constantly on the look out for oncoming UTIs.  He also has an autoimmune disease that flares up from time to time.  It attacks his eyes and if left untreated could cause blindness. This cat is no joke.
Lily 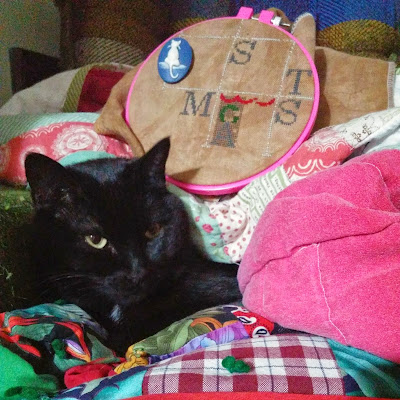 Lastly, there is Lily. Lily is the sweetest out of the kitties. She isn't overly demanding or needy. She makes her presence known when she wants some loving but otherwise, she's a super chill cat who just wants to do her own thing. Like Hooch, she was also a humane society rescue. We chose a black cat because sadly they are the most persecuted of cats due to silly superstitions. We've both vowed to only adopt black cats in our future because of this.  We were binge watching How I Met Your Mother the summer we adopted her so obviously that is how she got her name. My husband argues that her full name is Lilypad but I disagree and think that is a nickname only.

Fun Fact:
We adopted her on Harry Potter's birthday which makes her name even more fitting, if you ask me.
My husband and I adopted all these cats pretty early on in our relationship, basically as soon as we started to live together we started to collect them and after two years of living together the herd was complete.  They don't all love each other and are constantly battling to see who can receive the most attention.  We had no idea what we wanted out of a pet family or really what our preferences were. I just knew I LOVED ALL THE KITTIES! Now that I've been a pet parent for almost 10 years (what the junk?!) I now know what my perfect pet ratio would be.  It would hands down be a larger sized super lazy dog and a black cat. I will adopt them at the same time and they will grow up together and be best friends and it will be amazing. Until then, I'll enjoy my adorable kitties who are slightly crabby from having to fight for the most attention.

Well, that's my kitty family! Thanks for reading about them! I would love to hear about your pet family too!
Posted by Jenafaye at 8:00 AM