3 Reasons You Should Read The Hate U Give 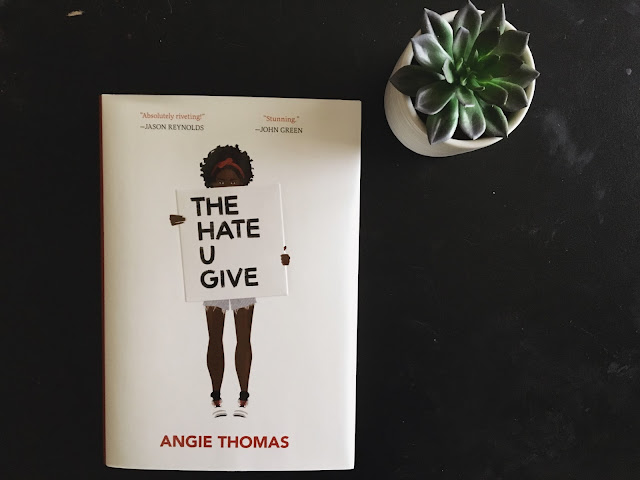 Hey book lovers! The Hate U Give by Angie Thomas was our April book club selection and it was maybe one of the best books I've read this year, maybe even last year. It had a lot of hype before it was released and it was well worth that hype y'all. It was inspired by the Black Lives Matter movement and it was such a powerful read on the subject. So let's jump in to a few reasons you should add this to your reading list like yesterday.

1. Powerful commentary on the BLM movement
Heather Says:
I like to think of myself as pretty woke, but there are some things you will never understand if you don't go through them. I will never understand the fear a person of color faces when pulled over by the police. I just won't. It's heartbreaking that some people are raised to follow orders from a cop, someone who is supposed to protect you, to a tee otherwise you risk possibly dying. It's a very real thing that's happen too many times, especially lately. This book gives you a glimpse into the world of Starr Carter, who is with her childhood friend Kahlil when he is fatally shot during a traffic stop. It's a very real glimpse into losing someone close to you for no reason, while also dealing with the stereotypes that get focused on in the media. Kahlil was selling drugs, so that's obviously the focus, but he was also a person who was trying to help his mom. It's heartbreaking and causes you to take a hard look at your own privilege at the same time.

Jen Says:
This is a really tricky subject. Heather 100% nails it on the head. We, collectively, will never understand that fear or even the disjointed relationship between black Americans and the police force. More than likely, we could smart off to a cop and the repercussion would not result in death but that could literally be the precursor to the end for a person of color.  Hell, I've actually had a couple of run ins with the law and while remaining upmost respectful on my part, that is not how I was treated by the officers in return. Innocent until proven guilty some how seems to get lost in translation. Public executions, hosted in the street, should absolutely not be happening-not for any reason.  A big thing I took away from this is LAYERS. I feel like I'm constantly quote Donkey from Shrek, but it's true just as much know as it ever was. People are basically onions made up of a ridiculous amount of layers. One layer does not define you. You have to view all the layers as a whole to make any sort of determination in regards to ones character and maybe to try to see beyond the stereotype.


2. Support diversity in YA
Heather Says:
YA has not always been the most diverse genre. Usually it's some unnaturally beautiful white girl who has guys falling all over her (no thank you). Even the books not centered on romance tend to feature a white protagonist. In the past few years, there's been a huge push to get more diverse books into the hands of YA readers. I've tried to make sure I'm reading more books that have a person of color as a main character that's also written by a person of color. The way to make publishers pay attention and see there is a demand for diversity, is to support books like this. It's not only supporting diversity, but also read a really powerful book that's amazing and real and heartbreaking and wonderful.

Jen Says:
Man, not to be a traitor to the YA book world, which is one of my favorites, but yea they fail pretty hard at diversity.  I can only think if a handful of books that I've read in the last 5 years that have been even remotely diverse.  Heather's right, it usually seems like unnaturally beautiful white teenage girls. Maybe if you are lucky you'll get a diverse supporting character.  I'm even thinking back to some of the fantasy books I've read too and you get your run of super strong female characters but I've yet to read a strong female character that was also a women of color. We need this. There is a serious cultural division in our country and half the problem is educating yourself to knowing and understanding people that are different from you. Differences aren't the issues, it's the understanding that's the problem.  I absolutely love learning about other people's perspective and plights in life. I think that's half the reason why I can get ridiculously wrapped up in different cult movements throughout our country. I personally would never make the decisions these people do, but I enjoy . Perspectives are powerful.

3. Fully developed, interesting characters
Heather Says:
This is a book where each character has a rich backstory, where the relationships are real and relatable. Starr struggles with staying true to her community while attending a mostly white high school an hour away. She's dating a white guy in secret because she's afraid of how her dad will react. She struggles with the medias perception of Kahlil as a thug while the Kahlil she knew was a kind friend. Even the side characters are fully developed. Starr's cop uncle, who struggles with his job and defending the neighborhood he's from. Her dad who is a former gang member, runs a local grocery store, and is passionate about making positive changes in his community. Starr's best friends at school who don't fully know the whole her.  Her boyfriend who is kind and wonderful and always there for her but doesn't fully understand her struggles as a black woman. It's full of these rich characters that you love and root for.

Jen Says:
I'll tell you, this book was gripping. I finished it in a couple of days which is pretty impressive with my reading speed lately. Angie Thomas is an author to look out for in the coming years.  Heather is right. The characters, and I mean allllll the characters, are very dimensional. I literally felt like I knew them-like I was Starr's bestie. I also now have more of an understanding of their plight in society.  It's so easy to stick your head in the sand and blame the victim of police violence for their actions without fully understanding the tense relationship between a particular race and said law enforcement. It's very important not to jump to conclusions in matters such as these. This was hands down my favorite read so far this year. It's empowering, heartbreaking and utterly moving.