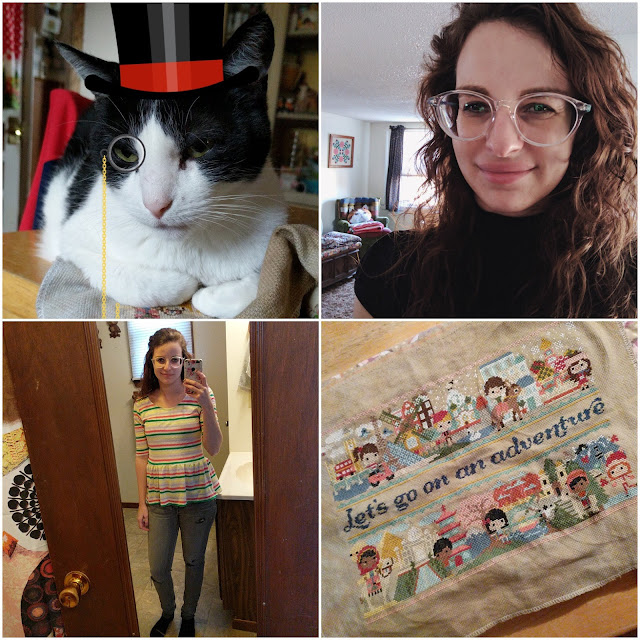 Read
Other than reading a few comics I wrote about in our April Goal's post, I mainly focused on our book club book and it's sequel.  I did manage to listen to both Harry Potter audio books and I'm super into experiencing Harry Potter in a whole other way. Let's talk about that more in my listening section.
Watched
Man, my Husband has demanded a Game of Throne rewatch before the upcoming season and with baseball starting he wanted to get an early start. We are already on season 4. It's never disappoints and has allowed me to make ridiculous cross stitch progress.  I've also wholeheartedly been enjoying weekly standup specials Netflix has been airing. Don't miss out on these, they are gold.

So like I said, I've been listening to the Harry Potter audio books and have finished the first two.  It gives me more time to ponder some of the situations. Like, when Harry takes over Dudley's second bedroom which is full of his old stuff. Does Harry live with that old stuff forever or do they eventually clean it out and make the room decent for him? WE'LL NEVER KNOW. Also, when Harry sets Dobby free and they say their farewell and Dobby apparates, WHERE DOES DOBBY GO? He's been serving the Malfoy's for what I assume was his entire life. Where was his first choice to go once freedom was obtained.

1. Finished Pumpkin Passport 2016 Project
I joined these yearly stitchalongs in 2013 and that was seriously the only year I've stayed caught up.  Every year I get caught up in all the seasonal projects, especially towards the later part of the year. For almost 2 weeks, I powered through and finished this project. Feels so good. And my goal this year is to stay caught up and I'm crushing it. I've already finished April's block!

2.  Sew Top/Expand Sewing Repertoire
So, I'm still riding my sewing high from a few weeks ago. Nothing is more encouraging than completely nailing a new task.  Sewing the shirt may have been time consuming but it was extremely satisfying.  The dress is next on my list and I'm pumpppppped! I'm ready to Romy and Michelle the shit out of my wardrobe.

3. New Glasses
Are you tired of hearing about my new glasses yet? To bad, because I'm still pumped about them and I seriously recommend ordering glasses online for anyone who may have been leery. Do it. They are a fraction of the costs compared to ordering them from the eye doctor. And if t means I get more choices, I'm on board. 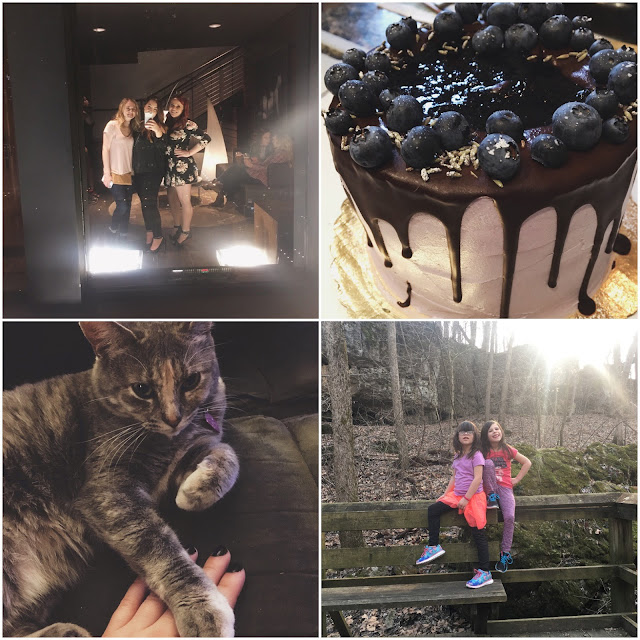 Read
This month I was able to fit in 4 comics that Jen lent me, which  were really great. Two were Gotham Academy, Goldie Vance, and a new Giant Days (my favorite comic series). I love that Jen shares all her comics with me. I hope I can soon share all the comics I recently bought with her. I also got to fit in quite a few library books. I have a bad habit of requesting a bunch on hold, then they are all available at once, so I'm in a rush to finish them all. I recently caught up, just in time for 6 more library books to be ready to be picked up.

Watched
This month I started watching two really great things. Jarrett and I take turns picking hour long shows to watch and in March he got to pick. He chose Fargo. We are almost done with the first season, which has been freaking great! I also started watching How to Get Away with Murder on my own, which is so addictive and I've gasped out loud multiple times. Viola Davis is a god damn national treasure.

Listening
March was all about starting the podcast Rose Buddies. It's a couple (Rachel and Griffin McElroy) who watch The Bachelor (and Bachelorette and Bachelor in Paradise) then discuss it. It's hilarious and their commentary is my favorite thing. The Bachelor is my guilty pleasure. I know it's ridiculous but I'm 100% into it. It's nice to find a podcast that pokes fun at it but is also super into the Bachelor family of products.

1. It's sweater knitting time!
One of my birthday goals (and March small goals) was to knit a sweater. At the beginning of March I ordered the yarn I needed and I'm about halfway done with the back panel. It's a striped sweater in jewel tones. I can't wait to see how it comes out and to knock another big thing off my crafty to do list.

2. Birthday celebrations
Jarrett turned 33 this month and we did some low key celebrating. He's not big on birthdays but we did a few small things. On the actual day we went out for drinks with his coworkers, which is always a good time. You can't beat small town bars where the beers are $4 and the waitresses all know you. Then that weekend we went into St. Louis for pizza and cake (peep that vegan Blueberry Lavendar Bliss cake above by Genuinely Baked) with some friends and the girls. It was all really fun and the perfect way to celebrate my favorite guy.

3. Staycation
I also got to go on a Staycation in St. Louis with two of my favorite friends. We stayed at the Hilton in downtown St. Louis, got all dressed up, and went out drinking. We started at a rooftop bar that has an amazing view of STL and made some new friends. Then we headed over to BallPark Village. There are a lot of bars over there so we started at one with a mechanical bull and then spent the rest of the night dancing. I don't really go out like that anymore, but it was so fun to do it with my friends. It was totally worth the all day hangover I dealt with the next day.