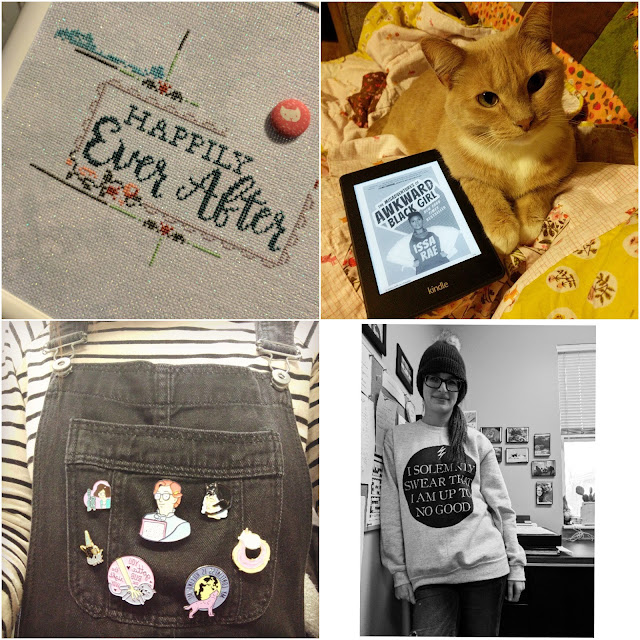 Read
Man, this month was an off month reading wise for me.  I read our January book, My Lady Jane which I thought was really cute.  I read the Unexpected Everything by Morgan Matson which I also really enjoyed.  I started the MisAdventures of a Awkward Black Girl.  I haven't finished it yet, but I'm finding it enjoyable.
Watched


I watched a documentary called "Jesus Camp" and it was absolutely terrifying.  I follow a lot of different cult movements and I was very aware there was a evangelical movement wherefore they homeschool their children and teach them to become involved in politics to fight out their specific culture wars but watching it the day before the #muslimban was written into law was very jarring.  It made me realize that is exactly what we are watching being played out in the White House and it is very unsettling.  I'm very late to this documentary since it has been out for 10 years but I watched it at the right time for it to hit me hard.  Kids speaking in tongues is enough to freak anyone out.

Listening
I listened/watched Neal Brennan's and Garfunkel & Oat's new standups on Netflix. They were both great and totally worth checking out.  Garfunkel & Oats are one of my favorite girl duos and if you take anything from this post, watch "Pregnant ladies are Smug". You will thank me. (No offense to pregnant ladies at all, of course, some people are just ridiculous!)


Also this month:
1.  Feminist Group
This month I joined a local feminist/women's advocacy group to try to figure out how to make a difference locally.  It has been very informative and I'm very interested to see where it is going and what we will accomplish.

2.  Sewing Accident
I've been sewing since 2009 and have never had any major sewing accidents.  Over the weekend, I had my first.  I'll save you the gross details but there was a needle stuck completely through my finger. It also caused me to have my first panic attack which was interesting and perspective altering. Hopefully I can avoid anymore sewing related injuries because sewing is part of who I am.

3.  Happily Ever After Club
Since 2012, I've participated in a yearly cross stitch club hosted by The Frosted Pumpkin Stitchery.  You get one pattern a month and stitch them all together to create a completed sampler.  This year, they choose to do a Happily Ever After book theme which I totally love.  Plus the boarder is floral and to die for.  I was actually thinking about skipping this year's sampler to focus on other projects but couldn't pass it up once the theme was debuted. 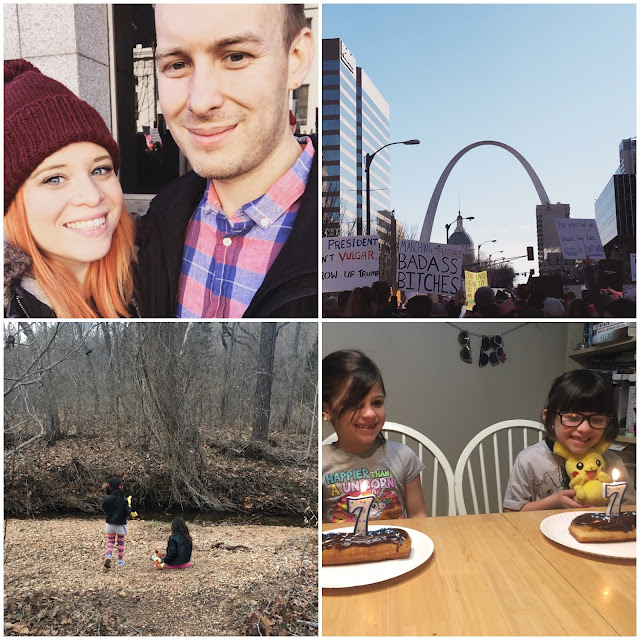 Read
This month has been such a weird reading month for me. It feels like I didn't get to fit in as many books as I wanted to, which is always a bummer. I did manage to get to The Run of His Life: The People v. OJ Simpson by Jeffrey Toobin. Jeffrey was a reported who was there for the entire OJ trial, so he has a really interesting perspective and got a lot of access to people and materials that most people didn't. Like a lot of people, I picked this up after watching American Crime Story: The People v. OJ Simpson (the show was based in large part on this book). Even with watching a dramatization of this, I still found the book fascinating on so many levels. True crime lovers should totally check this one out.

Watched
This month is was my turn to pick an hour long show to watch (my boyfriend Jarrett and I take turns choosing shows) and I settled on Black Mirror. I feel like I'm so late to the party on this one because damn it's a really interesting party. We are on season 2 right now and every single episode has been thought provoking. I'm officially on board the Black Mirror ship.

The Oscar nominees were announced last week so we are also officially starting our Oscar watching tradition. Each year we watch as many Oscar nominated movies as we can and then we each fill out a ballot for a bet. Winner buys a fancy dinner. So far the standouts for me have been Moonlight and Life, Animated.

Listening
Jen has been a long time fan of the tv show Adam Ruins Everything but I don't have cable so I haven't been able to check it out yet, besides random clips I see on Facebook. I found out that there is actually an Adam Ruins Everything podcast and it's wonderful! Adam sits down with experts he talks to on the show, but gets to spend 45-60 minutes talking about their expertise with them. Each episode is really interesting and engaging, even without watching the show, I have had no problem jumping in.

Like most people I know and interact with, I've been horrified and fired up for action since Trump was elected (I almost throw up in my mouth each time I have think/say something about Trump being elected). I participated in the Women's March in St. Louis with about 20,000 other people (more than 4 million worldwide!). It was moving, emotional, and amazing to be around so many people who are just as ready for action as I am. We made a huge statement, but now it's important to me to keep showing up. I'm also now a monthly donator to the ACLU. There are so many ways to get engaged and take action.

My babes turned 7 this month and it feels insanely old. I have 7 year olds? How did this happen? They decided on checking out City Museum and the cat cafe in STL for their birthday celebration. They are definitely my kids. They have developed into these funny, goofy, smart, empathetic, nerdy kids who I have so much fun talking to. They observe so much of the world and want to know the reason behind things that can be hard to explain. I have a feeling 7 will be even better than 6, and 6 was pretty dang good.

Ughhhh. The last week in December my computer decided to freak out and shut down. After spending an hour with Apple support, I was able to get it working again by doing something called Internet Recovery. I repair the disk and it works again....for a few days anyway. I don't want to buy a new computer if I can help it, mostly because I would have to buy Office and Photoshop again. Thankfully I have a work computer I can use in the meantime, but I think it's finally time to make a visit to the Apple Store to see if I can fix this once and for all. I bought an external hard drive so once I back everything up it's off to be repaired.