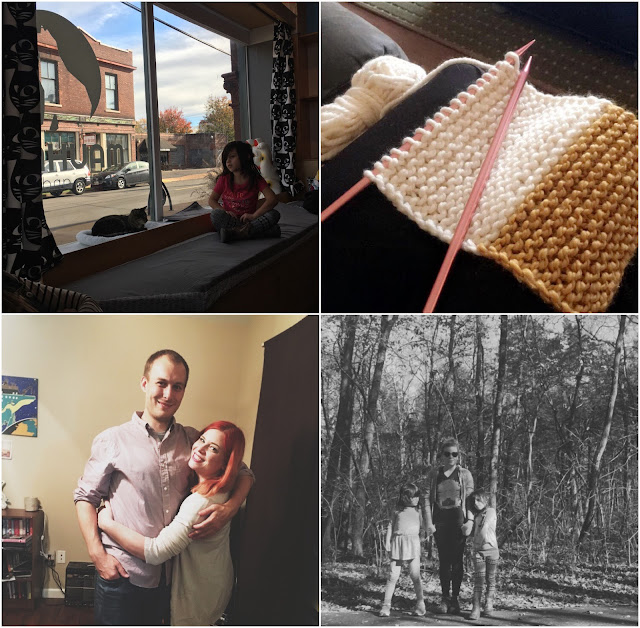 This month was full of great reads! The book club pick The Female of the Species by Mindy McGinnis blew me away. I literally read it in one day. I also finally got around to One True Loves by Taylor Jenkins Reid and it was such a thought provoking read. Something I haven't felt since her other book Maybe in Another Life. Other goodness includes It's Okay to Laugh (Crying is Cool Too) by Nora McInerny Purmont and the comic Wytches by Scott Snyder.  November was a really solid reading month for me friends.

I finally was able to catch up on Supernatural on Netflix. Man oh man do I love those Winchester boys. I'm actually a little sad my epic binge watch is over. I've moved on to hard core binging Gilmore Girls so maybe I can watch the revival before any spoilers hit my ears.  On another note, my boyfriend and I finished up our Battlestar Galactica watch, so now I'm excited to see what he's going to pick next,

I've added some new podcasts into my rotation this month. Podcasts literally save my commute from being the worst thing ever. First up is Shailey and Katie: DIY, Design, Photo & Video, Parenting, & Laughter. Shailey and Katie are hilarious and give a nice glimpse into being work from home moms with creative jobs. They have really cool perspectives on things and have guest from other blogs, like Emma Chapman from A Beautiful Mess. I also added Kill by Kill to my subscriptions and it's been a real treat. If you are a horror fan, you're going to love Patrick and Gena taking on Friday the 13th and all the silly and awesome details.

Also this month:
Sickness 24/7
I wish this was a joke, but I was literally sick for almost 3 weeks straight. Two of those times was with strep throat. One of the times with strep throat also included a horrific head cold. So I spent a lot of time feeling miserable and working from home. For the first time maybe ever, I'm excited to go back to work and kind of kick ass instead of barely keeping it together.

Cat Cafe Goodness
The best thing to happen to The Best Friend Gang was the opening of Mauhaus in St. Louis. Mauhaus has been on my radar for the past year, obviously being the crazy cat lazy I am. So as soon as I saw they were taking reservations on Instagram, I signed us up! Jen and I took the girls and we all got delicious coffee drinks and spent over an hour petting cats and having the best time. We are totally going back asap! Bonus: all the cats at the cafe are up for adoption and I've seen that 4 of them have already found forever homes!

The First Annual Friendsgiving
In my small goals for this month I mentioned a sister Thanksgiving was in the works. This turned into a Friendsgiving that was maybe the best! Jarrett and I hosted and cooked a lot of delicious food (some was more of hit than others) and had fun laughing with the people who are most important to me. It was a hit and I think it's a tradition that we will keep up next year as well. Though this time we are thinking of doing a little something different food wise.

Knitting Profesh
We usually only do 3 things here, but I wanted to brag a little that I took a knitting class and have fulfilled something I've been wanting to learn for years. I took a beginners knitting class and it was such a good investment. I have learned so much and actually finished my first project today. I'm already moving on to my second scarf so I'm basically a pro now you guys. 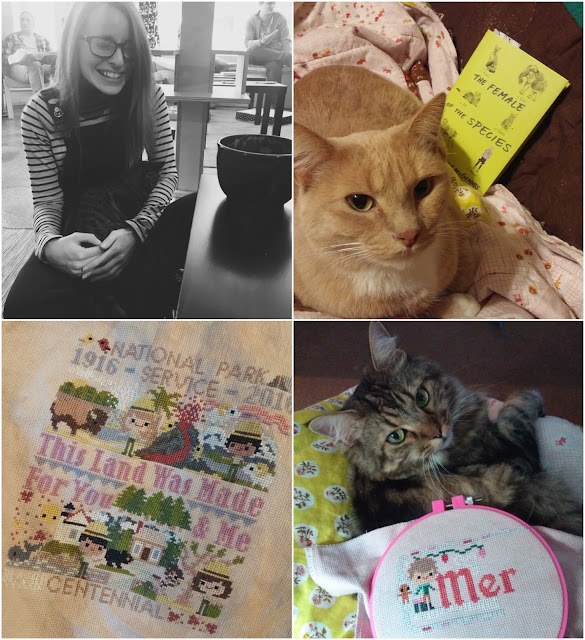 Read
I made some progress book wise this month with a total of 5 finishes. I read Illuminae by Amie Kaufman and I really loved it. It was in an email/instant message/journal entry format which I'm always a fan of. I'm dying to read book Gemina. I read a cult inspired book called The Family by Marissa Kennerson. It was a little scary, really sad, yet fascinating all at the same time. I ready Drew Barrymore's memoir (even though she isn't calling it a memoir--who need's labels?) Wildflower and I really enjoyed it. I'm always into reading about someone's life and what shaped the person they are.  I randomly picked up All the Rage by Courtney Summers over the past month and was also able to squeeze that in. It's about rape and was a pretty heavy topic. I didn't love it, but I got it. Oh, and let's not forget about our book club pick, The Female of the Species by Mindy McGinnis.  I won't say too much now, but I pretty much loved it.

Watched
Gilmore Girls Revival! I'll obviously keep this spoiler free since the bestie and I'm sure many others didn't get to binge it this past weekend. I really enjoyed it and I think I'm destined to rewatch the entire series because those Gilmore Girls give me alllll the feels. Maybe I was just going through Gilmore Girl withdrawal. Either way, I dug it.  I also watched Good Girls Revolt on Amazon. It was set in 1969-1970 during women's liberation and it was great. Great music, great fashion and great women kicking ass and realizing their potential. It's a great feminist watch for sure!

Listening
The husband and I listened/watched Dana Carvey on Netflix.  I can't see Dana without thinking of Wayne's World and him making fun of his 20 something sons was seriously one of the most hilarious things I've ever heard. Check it out, you won't be disappointed.
Also this month:

Life at the Cat Café
I think this deserves to be on both of our rewind's this month. I would like to think I have a different perspective on the subject, but I think we are all pretty much in agreement--it was fantastic. We got some yummy drinks and sat down amongst the kitties and the fun began. Pretty quickly one made a bee line for my lap and took up camp there for a few minutes.  I thought my heart was going to explode in happiness. Not only do my 5 fur babies at home love me, but so do ALL THE KITTIES of the world. It was great sharing this experience with the members of The Best Friend Gang and I can't wait to plan another trip there.  Also, shout out to the best hot chocolate I've ever had and I've been chasing that high ever since.

Thanksgivings Traditions
I celebrated thanksgiving multiple times and they were all great. It was super fun attending Heather's Friendsgiving and I'm super pumped to hear it's going to be an annual thing! Josh and I also prepared a huge ass meal the weekend before.  We made a mess, giggled and used all my fancy pyrex dishes.  However, I learned that in all the amount of junk I own, that I do not own a gravy boat. I have 2 soup tureens, a butter holder and even 2 sets of vinegar and oil cuvettes but nope, no gravy boat. I found this highly complexing while I was finding a dish for gravy.

Cross Stitch Catch Up
When it comes to starting crafts, sometimes I'm like that kid who's eyes are too big for their stomach when it comes to meal time. I get so excited starting ALLLLL the projects that sometimes I have 3 going at once and I feel overwhelmed and like I'm not making any progress. This month I spent a lot of time working on catching up on some outstanding projects.  I finished one, caught up on one and am reallllly trying to catch up on my yearly sampler before the end of the year and the new one is released.  Anyway, I guess I'm in a perpetual state of playing catch up.
Posted by Heather at 12:10 PM