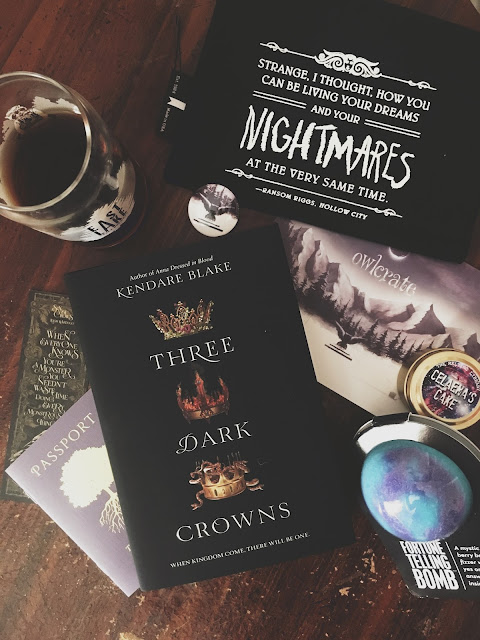 Hey book loving friends! It's been a hot minute since we've had any book discussions here on the ol' blog. Book discussions are Jen and my favorite thing, hell it's why we started this whole blog! A cool place to talk books with your BFF! However, book discussions aren't our most read posts. They were kind of long and clunky and could be a little alienating if you hadn't read the book yet. So we took a break for a few months to think of a new way to make book discussions exciting again and here we are. A short list of a few reasons you need to read this book! This being of course whatever our book club pick was. So here, we go! Let's discuss in the comments, feedback appreciated.
So we read Three Dark Crowns in October for book club so let's refresh on what it was about shall we?

In every generation on the island of Fennbirn, a set of triplets is born: three queens, all equal heirs to the crown and each possessor of a coveted magic. Mirabella is a fierce elemental, able to spark hungry flames or vicious storms at the snap of her fingers. Katharine is a poisoner, one who can ingest the deadliest poisons without so much as a stomachache. Arsinoe, a naturalist, is said to have the ability to bloom the reddest rose and control the fiercest of lions.
But becoming the Queen Crowned isn’t solely a matter of royal birth. Each sister has to fight for it. And it’s not just a game of win or lose...it’s life or death. The night the sisters turn sixteen, the battle begins.
The last queen standing gets the crown.

Ok now that we are all caught up, here's 3 reasons you need to read Three Dark Crowns by Kendare Blake:

1. Magical Sisters
Heather Says:
So three triplets all with different powers. On their 16th birthday, there's a huge festival where one walks away with the crown. Each chapter alternates points of view with the sisters so you get to know each of them individually. I don't know if I could pick a favorite sister, but it was so cool to see them struggle with the fact that they would have to fight each other, while two of them are keeping secrets on how powerful they actually are.

Jen Says:
The different powers were so cool and Heather is right, it is way too hard to pick a favorite sister or even a favorite power. The idea of being able to control the weather or things within nature or being able to withstand the strongest of poisons. I was way into watching them develop their individual gifts.

2. So many schemes
Heather Says:
Everybody has an agenda in this book and you literally cannot trust any body. One sister learns that a little harder than the others. Sure, there are plenty of great solid friendships (see reason 3) but there is so much going on behind the sister's backs that it's kind of insane. Each sister was raised in a different part of the island among others with their gift. Some people see keeping certain gifts in power as the most important thing and aren't afraid to manipulate their way to the crown.

Jen Says:
I agree! Everyone had a different opinion who should win out in the end. Watching the schemes unfold and the odds stack up really made my heart race!

3. Friendship to the max
Heather Says:
The friendships in this book are so real and vital. Each sister has her own sets of friends, along with people who she maybe shouldn't trust all that much. There's so much behind the scenes scheming by both the princesses and the people surrounding them. Friendship in YA novels is one of my hands down favorite things and it was really well developed in this novel. There's a little bit of romance in here too but it's totally overshadowed by the sister's relationships and friendships.

Jen Says:
Strong woman helping each other while kicking ass is seriously my jam and this book was full of that.

So 3 pretty great reasons to read Three Dark Crowns, like yesterday. Totally let us know if you add this to your list! It was maybe one of my favorite reads this year and I'm basically dying until the next one comes out.