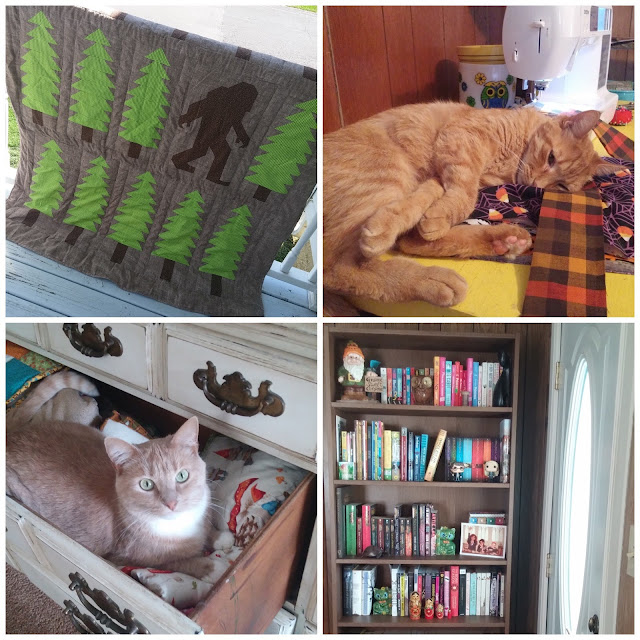 Read:
Obviously, my first few days of the month were spend reading the crap out of Empires of Storms by Sarah J. Maas. It was really great. There were a few small annoyances but it was so plot and action heavy that I can almost overlook the things that bugged me. I casually read both comics, Gotham Academy, Volume 1 & Squirrel Girl, Volume 2.  I think Gotham Academy will be a new favorite. As I was awaiting the release of Crooked Kingdom, I reread Six of Crows which I think I loved even more this time around.


Watched:
Bob's Burgers!!! Seriously, I can't believe I've missed 5 seasons of the most glorious cartoon on the planet. I've been binge watching the crap out of this show and it has almost taken place of That 70's Show as my go to show to watch as I sew. Those kids are great and I totally already bought a Tina inspired pin.


Listening:
Glory by B. Spears, duh. Really if you tag B. Spears name to anything I'll probably go bananas over it. She's ingrained in my 13 year old heart foreverrrrrrrrrrrrr.


Man, this evokes so many emotions. Super excitement for getting to meet SJM! Complete frustration at Barnes & Noble for not knowing how to host a book event. Anger at having to stand in line for hours. Happiness at finding a Luna Funko.  It was great getting meeting SJM and getting a book signed by her. It was a super rainy evening and if I would have known how bad the hosting would have been, I would have probably skipped it and had a Netflix night. Because I'm 30.


The husband and I decided to take a bunch of long weekends during September.  I haven't worked a 5 day week in over a month and it has been glorious.  We mostly stuck to our normal "staycation" style of vacationing but it was really great to have some time off without any commitments. I got a lot of crafts crafted, including finishing up my sasquatch quilt, and lots of Netflix watched. It was so good for the soul!


While we were off, we did check out the new Ikea in St. Louis.  I was in desperate need of a new bookshelf. My old bookshelf was overflowing and you were finding books everywhere around the house.  It was a success and it was super fun rearranging all my books and bookish trinkets.  I really loved Ikea and I can't wait to go back and replace some other household stuff I've been neglecting. 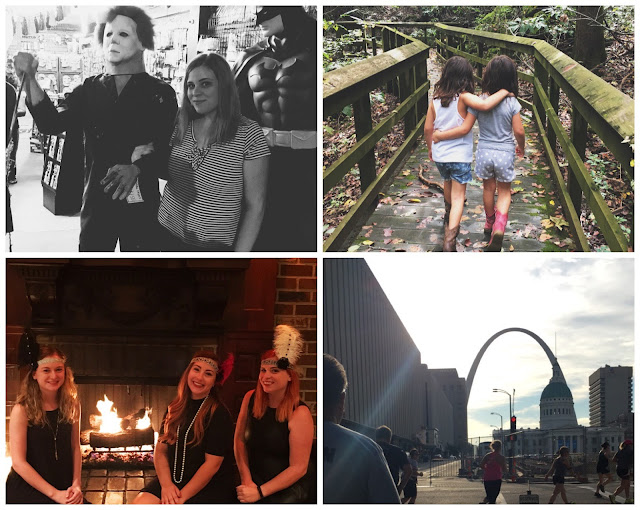 Read:
Man, I feel like I didn’t spend a ton of time reading but looking back I got so much accomplished! I read an uber creepy book called You by Caroline Kepnes. It’s told from the point of view from a sociopath named Joe who meets a woman in the bookstore he works in and then basically stalks her. It’s so good and creepy. I’m on the sequel Hidden Bodies now and it’s one of those books that is addictive and hard to put down. I also finished listening to the audiobook Without You, There is No Us by Suki Kim, about a journalist who poses as a Christian missionary and get a job teaching at a school to the sons of elite members of the DPK party in North Korea. It was fascinating and I highly recommend it!

Watched:
Guyssssss. I finally watched The Jinx about Robert Durst and holy shit. It was so good and unsettling. I know it seems like all my read/watched/listened this month are creepy unsettling things but true crime is my jam. I also started watching Key and Peele with my boyfriend, which is amazing. I literally cannot think of the Continental Breakfast skit without laughing.

Listening:
Shoutout to Sevi from Ware if the Vodka who recommended the podcast My Favorite Murder a few weeks ago, but it’s literally all I’ve been listening to. I’m finally caught up and feel so lost without Karen and Georgia talking about murder in my ears on my commute each day. I’m so obsessed, I’m ordering merch as we speak because I need to represent my favorite podcast like asap.

Cardinals Care 6K
I am not a runner but this is my second 6K I’ve ran/walked this year. I didn’t train for it so I was pleasantly surprised when I was 3 minutes faster than I was in the spring. It was perfect weather for a race in downtown St. Louis and you get to end the race inside Busch Stadium. It was pretty cool to see my boyfriend waiting at the end for me, and I got to eat delicious french toast afterward so it was basically the best.

Back to Work
I think I’ve mentioned before that I took some time off in August, so my first day back at work was on September 6th. I was nervous to go back but it’s been amazing. I’m on a new team that I really like and I feel like I’ve finally got my work mojo back. I’m starting to hit my goals that I was working on before I left so it feels good to be crushing it.

Murder Mystery Dinner
Every quarter my work hosts an offsite event. I've missed the past two but this quarter is was a murder mystery dinner. It was so cool and really fun! I've never been to anything like it before. My friends and I all wore black dresses and got flapper headbands, since it was 1920s themed. We each got small parts and it was a fun way to bond with people you see everyday but don't get to interact with as much. Plus the food and drinks were A++.