Seriously, if those book trailers didn't sell you, I'm not sure what I can say that will.

I started January off with another EPIC reread.  I've been reading this series since 2013 and have loved the entire journey. When Winter was released this fall I knew I had to make time for it. One of my 2016 reading goals is to reread some of my favorites and to finish up series I've started but never finished. This accomplishes both goals at the same time.

Before I start getting reviewing, I want to disclaim that even though I tried to keep it as spoiler free as possible, it might get a little spoilerish.  I feel like that is hard to not have any spoilers when you love a series as hard as I love this one.

I've read a couple of other fairytale retellings but none of them even hold a candle to this retelling.  This series has it all. Cyborg princesses, biochemical warfare, handsome knights in shining armor, strong females kicking ass, EVIL queens, space exploration, androids with attitude.  I loved how even though this series is a fairytale retelling it was still very much it's own, original story.   My mind was blown once I realized who the 7 dwarves were.  Marissa did a really good job of tying all of the books together and the series was not short on action, which I love. I feel like I should mention how truly awful Queen Levana was.  It has been quite a while since I've had such extreme hatred for a character.  Oh and Emperor Kai was pretty ok too.  I'm glad Cinder had a political ally.  Man, this is getting pretty gushy.  If I got any of my fangirling on you, I apologize.

I think the only negative thing I have to say about this series is there is some instalove happening, which I usually hate.  However, I think it actually worked for this series since it is a fairytale retelling and falling in love is super prevalent in those stories and all the characters are a bunch of teenagers. Of course instalove is happening all over the place.  It was easy enough for me to look past because the story is so epic.

I give this series ALL THE STARS or 5 stars on a typical rating scale.  I think in the grand scheme of series rankings, I would rank it after Harry Potter, being the #1 series of all time, and Throne of Glass, being my #2 series of all time. I'm going to be so bold as to make that designation for Throne of Glass even though the series isn't yet complete.  It is that good people!!

Marissa Meyer is now one of my favorite authors and I will pretty much buy any book she writes from now on. She is definitely at Sarah J. Maas and Rainbow Rowell status for me! This makes me even more excited about the Bestie and my bookish plans and events of 2016!

Have you read this series yet? Let's discuss it in the comments! 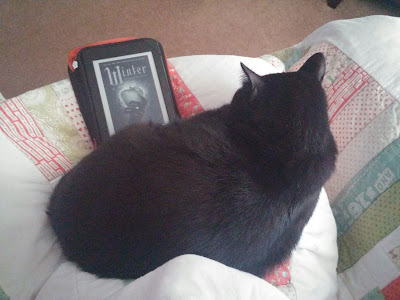 My reading supplies: quilts & kitties!
Posted by Heather at 12:46 PM