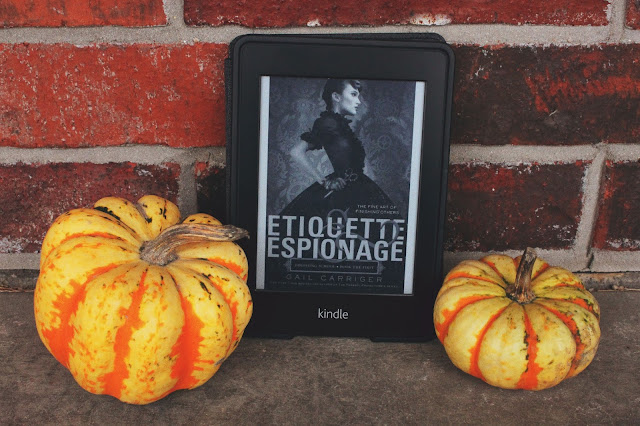 Welcome to another book discussion that is only a month late! We've got some serious book discussion catch up happening soon so stay tuned! These posts are seriously some of our favorites and the thing that inspired us to start blogging in the first place. For November we decided to tackle the Finishing School series by Gail Carriger. It follows Sophronia, a 14 year old girl who is sent to finishing school which turns out to be a school for espionage (obviously). It was such a fun series but for the sake of keeping these posts as spoiler free and short as possible, we will only be discussing the first book in the series. However, we will give an overall rating for the entire series at the end of the post! After that short and sweet introduction, let's get started!

Fourteen-year-old Sophronia is a great trial to her poor mother. Sophronia is more interested in dismantling clocks and climbing trees than proper manners--and the family can only hope that company never sees her atrocious curtsy. Mrs. Temminnick is desperate for her daughter to become a proper lady. So she enrolls Sophronia in Mademoiselle Geraldine's Finishing Academy for Young Ladies of Quality.

But Sophronia soon realizes the school is not quite what her mother might have hoped. At Mademoiselle Geraldine's, young ladies learn to finish...everything. Certainly, they learn the fine arts of dance, dress, and etiquette, but they also learn to deal out death, diversion, and espionage--in the politest possible ways, of course. Sophronia and her friends are in for a rousing first year's education.

Our reaction in GIF form after finishing Etiquette and Espionage

Discussion Time
Heather
So for the Finishing School series we will just be discussing the first book, Etiquette and Espionage. At the end we can rate the whole series but hopefully this helps avoid spoilers for the whole series! What was your first impression of this book?

Jen
My first impression of this book was feminism to the max! Well, at least as feminist as one can be in the 1800's attending a finishing school of espionage learning to be women of qual-i-tay.  I thought is was super cute and super silly, especially with names like Madam Barnacle Goose and Bumbersnoot! What about you?
Heather
I feel like having read Gail Carrigers other series, I was just kind of reminded of this fantastic world that she built in that series. It was so fun to jump into a world where young women are sent to Finishing School which really turns that concept on it's head, making "finishing" code for espionage. I really loved that. Did you have a favorite character or event in the book?

Jen
I think Gail did a great job with world building! I think the main character, Sophronia was my favorite part of the book. She was so brave, sneaky and kick ass.  I loved how she made it her business to explore the entire floating school and it was pretty sweet how she made friends with all the Sooties, even though they weren't in the same class as she was.  And man, if I could pick a 2nd favorite character, it would seriously be her mechanical dog she uses as a handbag. Bumbersnoot came in super handy at the most important times! And him pooping ash all over everything was pretty hilarious too!!
Heather
I agree with those choices! I did also love the feminist aspect, kind of taking women who wouldn't have had a lot of choices in that time in history and empowering them to be spies was such a cool idea. I loved Bumbersnoot and wish I had my own mechanimal to follow me around all the time. I think another one of my favorite characters was Vieve. I remember her from the Parasol Protectorate series and it was so fun to see her as a kid who always loved menswear and was great with inventions. I think Gail did an amazing job with all the side characters. They were all so rich and well developed that it was just such a fun read. Talking about it makes me want to bring up so many characters, like Pillover and Lady Maccon but really all the secondary characters were a blast!

Jen
I agree. The premise for this book is AMAZING. And man, you are making me want to react the Parasol Protectorate series so bad (next time I see you, I must borrow them!) because just talking about this series makes me want to fall right back into that world. Vieve was great since she wasn't they typical kid or girl for that matter. I agree! Those side characters had me laughing so hard.  Pillover was such a pill and his sister with her constant feinting at the site of anything unladylike. And we also can't forget about  Mademoiselle Geraldine, and her lack of knowledge about what was actually being taught in her finishing school.  I think the silliness of this series is really why I love it so much!
Heather
It's a very silly read in the best way possible! Sometimes you need something light between series or heavier books and this fits that perfectly. It has so many perfect characters, most of them super feminist and badass.  I'm rereading Soulless now, the first book in Parasol Protectorate series and it's been so fun to jump back into this world and kind of see the ties that Gail made with the Finishing School series. How would you rate this book and then the series? You can use the regular 5 star ratings or make your own up ☺

Jen
Man, I agree so hard about needing lighter books at times! And man, I can't wait to borrow Gail's other series from you! I remember finishing the first book and basically just hugging my kindle afterwards. Yea, it is a tad silly and on the lighter side, but it was such a badass story/world that I still stick with  my original rating of 4.5 stars. This is a series I could definitely see myself rereading in the future and man, it gave me heart eyes while I was reading it so that is how I justify my high rating. haha!  But for the entire series, I think my rating comes in more around 4 stars.  I think the first book is the strongest of them all and then they slowly get sillier with each following book in the series.  I did think the series ending was hilarious though! Now, your turn!
Heather
I'm going to rate the first book as 4 stars and the rest of the series at 4 stars as well. It's the perfect light funny read to pick up between things or when you just want to laugh at something silly. I loved this choice for book club!
Jen
I agree. I'm really glad we squeezed this series in this year!
Posted by Heather at 8:00 AM