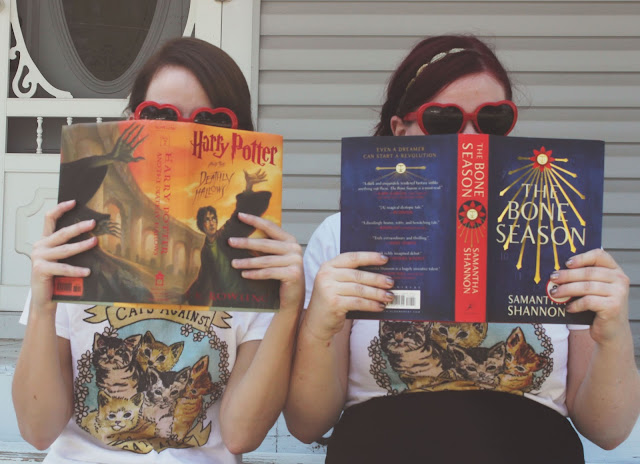 {Note: We did not read either of these books this year :P}

Starting this blog over the summer and being able to share our book club and monthly reads with the world has been some of the most fun we have had! Blogging is hard work and I'm still working on staying on top of it! If I could get paid to only blog I totally would but I've got to work and make that money, so you guys are stuck with our infrequent posting schedule for now :)

We both have been wanting to go back and post the book club choices from the past year. We won't be reviewing them beyond a brief sentence about each month and star reviews, but it is still nice to put them in a list showcasing all 28 books we read this year! I don't think either of us realized how big book club would be this year with the addition of a second book each month, so I think we are both looking forward to the slower speed of one pick a month. As huge book nerds, we are happy that you took the time to stop by this year and look forward to more books and bookish discussions in 2016!

Heather-January was such a fun month to kick off 2015. Both of the books we read this month were wonderful! I'm planning to reread both some time in 2016 as well.

Jen-Yea, January books pretty much kicked ass. Poehler is hilarious and I fell in love with Stephanie Perkins.  I need more, Perkins!

Heather-Shiver was a reread for me, and as much as I LOVE Maggie and the Raven Cycle series, Shiver is just not for me. Uninvited was good from what I remember, but I am not remembering a ton about it so maybe it wasn't as good as I thought?

Jen-Oh Maggie, I'm so sorry. I love The Raven Boys so hard but the Shiver series just doesn't even compare to that masterpiece.  I remember thinking Univited was ok when I read it but honestly, I think it is a very mediocre dystopian.

Heather-March was another great month! The Stand was SO LONG but really good and creepy and just great. I'll Meet You There was definitely one of my favorite reads for the whole year.

Jen-Gah, this is the month I fell in love with Heather Demetrios and became super fearful of biochemical warfare. And what I said to Perkins goes for you too Demetrios. I need more!

Heather-Meant to Be was only ok. I don't remember much of it but I remember when we were reading it that we both agreed it wasn't the best. Red Queen was good, not great. It felt really similar to a lot of other books we've read, but the cover is fantastic and I'll probably stick with the series for now to see where it goes.

Jen-Mean to Be was super blah to me. I think I was expecting another Anna and the French Kiss and man, it did not deliver for me.  I enjoyed Red Queen. I think it has the possibility of being a good series. But I also read Red Queen after coming off the high from The Winner's Curse, which it just doesn't compare to.

Heather-Maybe every other month is amazing for book club because May was full of two great reads! ACOTAR is fantastic and I loved this new world that Sarah J Maas created. I'm counting down the days to the next book in the series already. I also loved The Shining and think it's a million times better than the movie. It was legit scary and had me freaked out multiple times.

Jen-ACOTAR was probably at the top of my favorite fantasy list this year, that and Queen of Shadows. Basically Sarah J. Maas is a boss. Her world building is astounding.  Gah! The Shining was so freaking creepy. At one point, I chucked the book across the room it creeped me so bad. Kind of like Joey on Friends who always hides it in the freezer when it gets too creepy.

Heather-None of the Above is fantastic and an important read I think everyone should check out. However, Finnikin of the Rock was a book I hated. Which was so weird, since it had so many great reviews from people whose opinions I usually trust on Goodreads. Just not for me I guess.

Jen-None of the Above is a book that made me want to be a better person, and throat punch anyone who is a bully.  If you check out one "real" book this year, make it be None of the Above. Finnikin of the Rock was a huge disappointment which I actually DNF, with Heather's guidance.  I was SUPER disappointed about this one because EVERYONE gave it such high reviews on goodreads and I bought the whole series in anticipation of how good it was supposed to be.

Heather-Dorothy Must Die was a book I DNF. I put it down after about 100 pages and after talking to Jen who agreed that I wasn't missing anything by putting it down. It was such a shame since the premise was so interesting and has a lot of potential. What in God's Name was really funny and light. I've never read anything by Simon Rich before but this was such a good pick and I'm glad I finally got to it!

Jen-Man, I was also super disappointed about Dorothy Must Die.  It has the best alternate Wizard of Oz premise that just did not deliver for me.  What in God's Name was pretty funny and quirky.  I think this was the weakest month out of the year.

Finishing School series discussion will be posted soon! {Shame on me for not having it done yet!}

We are still working on finishing up our December book discussions! Stay tuned for those next week :)
Simon vs the Homo Sapien Agenda
The Rest of Us Just Live Here