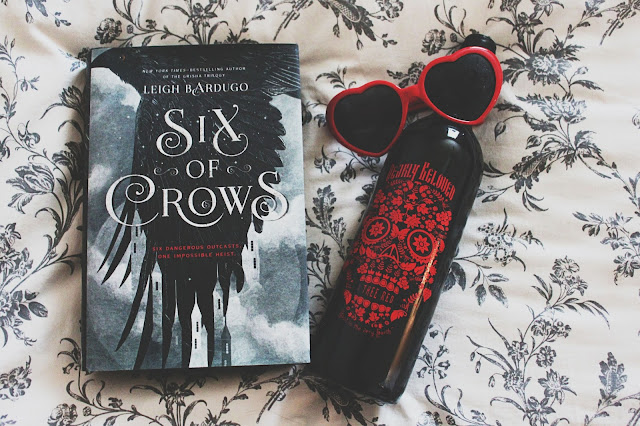 Hello friends! We are back with another book discussion! We actually decided to split up October's reviews into two posts. Carry On will be in it's own post next week! This week we discuss Six of Crows by Leigh Bardugo. This book really exceeded expectations (at least for me!) so I'm excited to jump into this book discussion. We've also tried to cut down on spoilers, I actually don't think this post has any at all! Hopefully that makes book discussions a little easier to read, especially if you haven't read the book and want to. Let's get this show started!

Book Description
Ketterdam: a bustling hub of international trade where anything can be had for the right price—and no one knows that better than criminal prodigy Kaz Brekker. Kaz is offered a chance at a deadly heist that could make him rich beyond his wildest dreams. But he can't pull it off alone...

A convict with a thirst for revenge.

A sharpshooter who can't walk away from a wager.

A runaway with a privileged past.

A spy known as the Wraith.

A Heartrender using her magic to survive the slums.

A thief with a gift for unlikely escapes.

Six dangerous outcasts. One impossible heist. Kaz's crew is the only thing that might stand between the world and destruction—if they don't kill each other first.

After Finishing Six of Crows in a GIF

Heather
So now we start our 3rd book discussion. Six of Crows by Leigh Bardugo!

Jen
This isn't our first encounter with Leigh Bardugo.  In our first book club year, we read book 1 of the Grisha Trilogy, Shadow and Bone, which I loved and have been meaning to read the rest of that series.  This book takes place within that world which I think is pretty cool! Almost like a companion series!

Heather
I also remember really loving Shadow and Bone, though I don't remember much of the book itself. I was pleasantly surprised with how much I ended up just loving Six of Crows! The Oceans Eleven vibe really hooked me!

Jen
Yes! It was like a crazy mix of fantasy and very intense crime novel.  I think the premise was super unique! It did take me a couple of chapters so figure out what the hell was going on and to kind of reintroduce me to the Grisha world itself but once I broke through that barrier it was really hard to put down!

Heather
I agree, it was a little hard to get into at first, but really I think it's because I forgot so much about the Grisha world. Once I was able to sort it out I was hooked. I just loved the group of 6 that came together to accomplish this prison break in that seemed impossible. I also love that each character was both bad and good. I love when characters in books exist in that moral grey area. If you had to pick a favorite character POV, which would it be?

Jen
Yea, there was a lot of characters to keep track of! I also did love that each character struggled with good vs. evil.  And oh geez, it is really hard for me to pick a favorite character POV! They were all so good! But I think the ringleader Kaz was my favorite. He was so ruthless and scared of nothing.  He had his failings because of his pride but I thought he was pretty kick ass for organizing and accomplishing the impossible prison break!
And man, he always had a trick up his sleeve until the very end!

Heather
Kaz is a good choice! Just when you thought they were in an impossible situation, he had a trick up his sleeve like he was planning for it the whole time! I think my favorite POV was Inej, the Wraith. I thought she was so soft spoken but someone who was very smart and a great kind of kick ass female character. Actually all the female characters were kick ass, which make my feminist heart happy!

Jen
Yea, Kaz is really just a lucky bastard.  The shenanigans within this book just made my heart race.  And I think Inej was my second favorite character.  I definitely admired her quiet kickassery!  I also agree that all the female were super kick ass! This book was full of so much female empowerment! And I really love that there was zero love triangles going on.

Heather
I loved the amount of shenanigans, the heart pounding tension, and the humor that made me literally laugh out loud sometimes. I also loved that there were no love triangles. I did love the Nina and Matthias story line. I think I just loved the amount of conflict in this book, both internal and external and that the easy choice we wanted characters to make was something they were just not able to do sometimes..

Jen
I agree.  All the conflicting angles made for super entertaining and anxious reading! I think the scene at the harbor was one of the best showdown scenes I've ever read before.  I was seriously shaking in my boots and then floored over how most of them escaped the situation. The trickery never ends in this one!  Leigh has written a masterpiece in my opinion.

Heather
I agree! I was kind of blown away by how much I liked this after going in with no expectations for it. As soon as I finished I just wanted more immediately and knew it was a 5 star book for me hands down. I can see this being a favorite series as it goes on. Adventure! Gangs! Romance (kind of)!
Humor! It's got it all!

Jen
Oh man, I agree so hard! 5 stars all the way! And yea, I can see this becoming one of those series we fangirl over.  It is going to be a reallllllllllly long wait until we get our hands on book 2. But you are right friend, it really did have the right bookish recipe to make a really interesting and kickass book!

Heather
We read a lot of fantasy YA and I honestly felt like this was something new and fresh, not a variation on the same kind of thing, which can happen a lot in the YA world.

Jen
I agree wholeheartedly! It was super dark and very much a twist in the fantasy YA game.  In fact, to pigeonhole it into the YA category really isn't fair for to this book.  I think fantasy lovers everywhere would love this book.  It just felt more mature to me compared to the other YA fantasies I've read, which let's face it, is a lot. haha!

Heather
Once again, I agree. I think that this is something that any fantasy love would enjoy. Sometimes YA gets lumped in as lighter reading or for younger readers, but honestly some of the best books I've read would be classified as YA. I think people would be surprised at the depth and range of great stories they would find in the YA genre.

Jen
I agree with that too.  Sometimes I feel a little juvenile for strictly reading YA but you are so right about the depth and range. Most of my favorite books are labeled as YA and I am not even ashamed!

Heather
I think that the feelings and experiences in YA are so relatable, even if you are past high school age. Everyone remembers those feelings. And some feelings are still universal, like finding your way or figuring out who you are as a person. For me, that is not something that stopped after high school.

Jen
I agree, I think the act of figuring yourself out as a person is an ongoing journey and you pretty much nailed why I love YA so much!

Heather
YA will have my heart forever maybe! I think that concludes our Six of Crows review and YA gushfest ❤