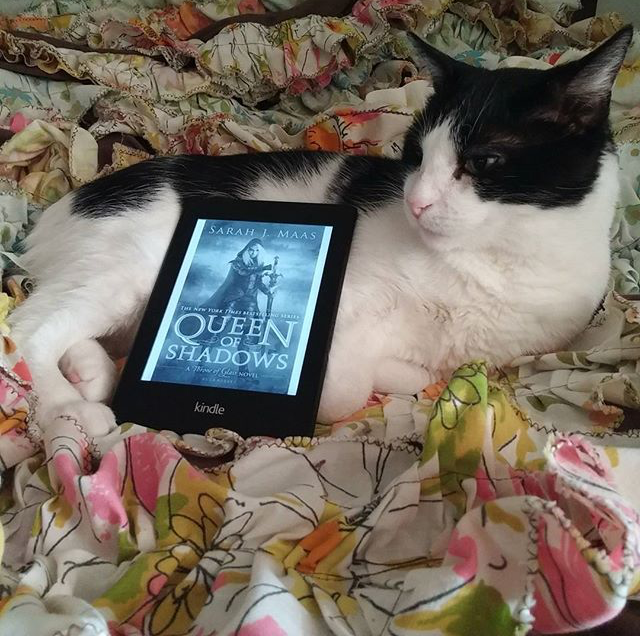 Hello! Here we are for another book discussion! We don't do traditional reviews. Instead, we get together and discuss the books we read over chat and then share them with you! Due to the nature of our discussions, these are very spoiler heavy! If you haven't read Queen of Shadows or the Throne of Glass series, don't read this discussion (definitely go read those books ASAP though!).

So we will start with a description of Queen of Shadows, then jump into the discussion below!

The queen has returned.
Everyone Celaena Sardothien loves has been taken from her. But she's at last returned to the empire—for vengeance, to rescue her once-glorious kingdom, and to confront the shadows of her past . . .She has embraced her identity as Aelin Galathynius, Queen of Terrasen. But before she can reclaim her throne, she must fight.She will fight for her cousin, a warrior prepared to die for her. She will fight for her friend, a young man trapped in an unspeakable prison. And she will fight for her people, enslaved to a brutal king and awaiting their lost queen's triumphant return.The fourth volume in the New York Times bestselling series contrinues Celaena's epic journey and builds to a passionate, agonizing crescendo that might just shatter her world

Overall Impression of this Book in gif Form

Heather
Ok! Time for our Queen of Shadows discussion! I know we were both really excited about this new release. Tell me one thing that really stood out for you with this book.

Jen
Yea, I'm probably going to fangirl all over this discussion because this book was INTENSE. My favorite thing about this book was the continuation of the witch story. Manion is one badass witch and I really love how Aelin and her were able to work together towards a mutual goal even though they are basically enemies.  What did you fangirl over the most?

Heather
I would actually have to agree that the witch story line was my hands down favorite part of this book. I know I mentioned it when we did our reread in August, but I wasn't feeling the witch story line as much the second time around. But in QoS, I felt like I was rushing through chapters to get more Manon in my life! I also have a strong feeling/hope that Manon and the 13 will join forces with Aelin at some point. A Manon/Aelin alliance is my OTP. Was there anything that you didn't LOVE about this book?

Jen
Oh man, I would squeal so hard if there was a Manon/Aelin alliance in the works! That would just be my dream come true!
I think my biggest complaint was the lack of intimacy between Rowan and Aelin. She had waited with Sam and she missed her opportunity and I just feel like she should have seized the day on this issue because thing got REALLY intense on multiple occasions.  You know she regrets missing out on this opportunity with Sam so I was a little disappointed in them and I felt like it was a little immature. Did you have any issues?

Heather
Yes if there is a Manon/Aelin alliance, I will lose my mind and probably be cheering to my empty house!
And I do agree on the intimacy issue. I thought it was even weirder because she didn't wait with Chaol because of the issue of her waiting with Sam and him dying. So I thought it was very strange that she kind of went backwards on this issue. I did have a few problems with this book. I felt like there was so much story jam packed into this one book. I think I would have preferred it to be a little more drawn out. I do like that is kind of has an ending to where I literally have no idea where the next two books will go and that's kind of exciting. I think between the romance aspect and the non-stop action of the story, those were my only two issues. How do you feel about the changes in Aelin's romantic partners?
Also, I love that they have dropped all pretense and she is just going by Aelin now!

Jen
Exactly, she basically jumped Chaol's bones but with Rowan, there is so much sexual tension that it is almost ridiculous at this point.  Like eye roll worthy.
I also agree that this book was nonstop action and nonstop plot.  With this story being so consuming, it is so hard to try to figure out how this series is going to end up.  It is very exciting!
And yea, I love who Aelin has completed accepted her fate in life and basically flaunts it.
At first, I was a little sad that it looks like Chaol is completely out of the picture for her romantically, however, he was also being the biggest baby through most of this book so I'm not too heart broken over it.  I'll be interested to see where the Rowan relationship goes.  I still haven't completely made my mind up about Rowan yet.

Heather
I do really hope the next book slows down a little and maybe delves into the emotional ramifications from all the decisions from this book. There's a lot to process and I kind of want to see how that pans out.
I do also think that Chaol was my number one choice before, but he needs to do a lot of growing before (or if) he could ever be with Aelin. I think it's refreshing that Rowan accepts Aelin, flaws and all. I don't think she has really ever had anyone who has accepted her for who she is entirely. I think at this point that Rowan is the best choice for Aelin at this point, though I'm also thinking a Dorian/Aelin marriage could be kick ass. Or Aelin as a single Queen kicking ass and taking names! Now for freindships....how much did you love the friendship between Aelin and Lysandra? And anything else you want to touch on that we haven't yet?

Jen
Yea, I'm still figuring out my feelings about Rowan. Part of me feels like he is the convenience choice right now for her. I think he does really accept her for who she is though.
And as much as I didn't dig Aelin/Dorian together in ToG, I think I'd really dig a marriage alliance between the two of them.  They would kick so much ass and take so many names.
I'm so glad you brought up Lysandra. For me, she was like the break out character of this book.  She has evolved so much since this story started. She seemed like such a jealous brat in the beginning but now she is a woman to be admired.  The way Lysandra & Aelin handled Arobynn was classic.
I really like how the author can wrap things up at the end of each book so there really isn't a huge cliffhanger but you are still curious to what is coming up next.

Heather
I think that Dorian has grown so much since Throne of Glass, that he is a more suitable choice for Aelin now. Or he could be in the future. I'm also fine with them just being friends!
I do love that everything we thought we knew about Lysandra was kind of thrown out the window and now Aelin has a good female friend in her inner circle. I really do think that this whole book kind of took relationships we thought we knew and turned them on their heads. I do wish we had gotten to see more of Arobynn before he was murdered. I think that dynamic was really interesting.
I am not as big of a fan of this ending, only because I do want a little kind of a hint on where things are going next. I felt like every other book ended on a note where it felt finished but you knew kind of where you were heading. I feel completely in the dark now!
And because we are coming up on an hour of chatting, let's wrap this up and give our final thoughts and reviews.

Jen
I agree so hard about all the relationships really getting turned on their heads and I really enjoyed that. It would have been interesting to see what really made Arobynn tick, but part of me is glad he is out of the way and can't harm all my friends. haha
Alright, for me this book was 5 stars even with its flaws. I'm over looking them because when I sat down to read this one, I was completely engulfed in the story and could not put it down to save my life. Even my normal distractions couldn't penetrate my reading focus. And Manon deserves 5 stars all on her own!

Heather
I agree for the most part! I give the series overall 5 stars, but this book in particular is more like 4 stars for me, only because the issues I had with it kind of stuck with me. I did find it to be a book I didn't want to put down, but I didn't hard core love it as much as the previous books in the series. I do agree that Manon is going to be 5 stars forever for me! #teamManon.

Jen
I think this is my favorite series since Potter and that is really saying something! And I may have given this book such a high rating because I read all the books back to back so I was on a collective TOG high and I'm having a hard time judging them separately. I just LOVE them so much. #teamManonforever

Heather
Can we make some #teamManon shirts? And I didn't really reflect on my issues with it until like a week later. But Sarah J Maas is still queen in my book!

Jen
I would die for a #teamManon shirt! I will read ANYTHING that lady writes. She is so inspiring!

Thanks for stopping by! if you've read Throne of Glass or Queen of Shadows, let's chat in the comments!
Posted by Heather at 2:05 PM